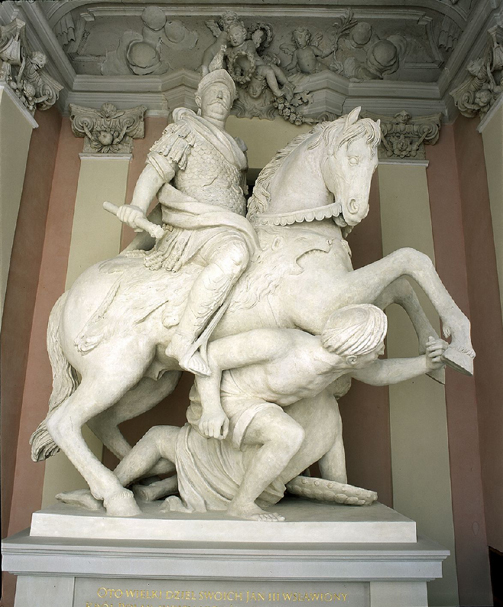 In the Wilanów palace, in the passage from the White Hall to the Southern Gallery an equestrian statue of Jan III Sobieski is situated. After the recent comprehensive maintenance of the monument, an inscription bearing plaque decorating the plinth has also been renovated. The inscription on the plaque in golden letters says, in Old Polish verse:

HERE STANDS JAN III, KNOWN OF HIS GREAT DEEDS
THE POLISH KING, PROCLAIMED THE PRIDE OF THE LECHITES’ WARS
HE BUILT BURIAL MOUNDS OF THE BODIES OF TURKS AND TATARS
A FEAT THAT HEAVENS DID NOT ALLOW EVERY KING
THE VIRTUE GAVE HIM LAURELS, AND THE RELIEF OF VIENNA
GAVE HIM THE EXCELLENT TITLE OF SAVIOUR AND VICTOR
THE CENTURIES WILL SAY THAT WE WILL NOT GET
ANOTHER MONARCH OF SUCH FAME AND POWER AGAIN.

Different versions of this poem, written in a rhymed 13-syllable verse, which is used as Polish heroic meter, can be found in several manuscripts containing the writings of Stanisław Herakliusz Lubomirski (1642-1702), Grand Marshall of the Crown – politician and erudite, who wrote under a pseudonym as Mirobulius Tassalinus, which is an anagram of the Latin version of his first and last name.

However it is worth noting that in the manuscripts the poem is longer – it has 10 or 12 lines instead of 8 visible on the plaque. Its beginning line is also different: “Here lies Jan the Third, known for his great deeds”. As it turns out the text has been written as an epitaph, written after the king’s death. Another line also has a different form: “The king, magnate, a warrior, a true pride of the Lechs” or “The king, Pole, a warrior and a true pride of the Lechites”. In the sixth line instead of “the Redeemer”, the version of the poem from the documents says “Salwator”1. Additionally, in most cases the manuscripts also contain the Latin version of the poem in the form of a funerary epigram, written in elegiac couplets. The first couplet of the epitaph says:

However in some manuscript the Latin text is accompanied with a different translation into Polish, beginning with words:

The existence of two versions of the poem in the Polish language brings us to the conclusion that the Latin text is the original and became a prototype for the Polish texts.

The same poem has been added to the printed text praising the king Jan III Sobieski, written by Jakub Kazimierz Rubinkowski. His creation, titled Janina zwycięskich tryumfów dziełami i heroicznym męstwem Jana III króla polskiego na Marsowym polu najjaśniejszy, po przełomanej otomańskiej i tatarskiej potencji nieśmiertelnym wiekom do druku podany [The Janina coat of arms, by the victorious deeds and heroic valour of Jan III, King of Poland, on the Field of Mars, made brightest after destroying the power of the Ottomans and the Tatars, immortalised for the ages] was printed for the first time in 1739 in Poznań. The text that concerns us has been preceded by the title “Epitaphia Serenissimo Ioanni Tertio in Ecclesia Parochiali Thorunensi (Epitaphs for His Serene Highness Jan III in the parish church in Toruń) along with three hexameters in Latin. Interestingly enough, the first two lines of the Polish text are in the form known from the inscription on the monument:

The printed poem is however longer than the inscription by 4 lines, and this feature makes it similar to the versions found in manuscripts. The reasons for omitting some of the poem’s lines in the inscription on the plinth, even though they are present in the manuscripts and in Rubinkowski’s book can be attributed to its complexity and ambiguity. Also in the book Janina we can find “Salwator” instead of the “REDEEMER”. It is worth noting that sometimes the poem is also accompanied by another text. In Rubinkowski’s book it is the three hexameters preceding the epitaph. In the manuscripts it is also preceded by a title. The Polish translation the entire texts reads:

“An inscription over the effigy presenting the triumph of the King Jan III in the main hall of the Hippocrenean manor, the estate of Lubomirski
It is unnecessary to say who he is,
Let the enemy recognise him with fear, the citizen – with love,
And the Turk, Vienna, Faith and the Emperor shall say his name.”

“Village processions of the gods and goddesses from the Lubomirski’s estate, in gratitude for saving the Penates in the year of 1683
in which, when the door of Janus is closed, the house is closed as well”.

These words refer the reader to the ancient Roman custom of opening the doors of the Temple of Janus wide during the time of war, and closing them in the peaceful times. “The temple was an index of peace and war, that when open it might signify that the nation was in arms, when closed that all the peoples round about were pacified.” – according to Livy, who wrote these words in the first book of his “History of Rome”.

The year of 1683 was a year of peace for Europe, glory for the Commonwealth and for Lubomirski it was also a year of closure, that is, the year in which the construction of his manor was finished and the equestrian monument of Sobieski, designed by Tylman of Gameren, was installed there. The question about the original text of the inscription on this monument still remains open. Adam Karpiński concluded that the monument could bear the aforementioned “inscription over the effigy”, but the words quoted in the very beginning of this article that decorate the Wilanów monument up to this day are also appropriate.