A Place at the Royal Table | report from workshop 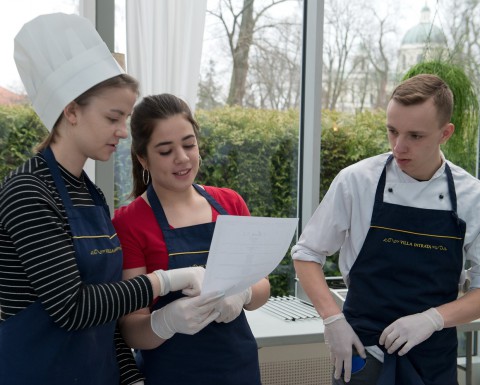 15 March 2018 brought Sokółka cooking school students to the royal table at the Museum of King Jan III’s Palace at Wilanów. Master chefs Maciej Nowicki, Norbert Sokołowski and Marcin Chmieliński guided workshop participants to discover the flavours of baroque cuisine in wonderful baroque royal residence. Together, they cooked up their own interpretations of recipes found in the first Polish cookbooks from 17th and 18th c., which are an accurate reflection of European culinary tradition. “Royal golden salmon”, along with thick anise- and saffron-seasoned sauce, was served as the main dish. The young chefs were also in for a surprise: their tutors showed them the “salty fish sausage” dish, also known as the perfect example of an Old Polish culinary illusion. To prepare this course, they seasoned finely chopped fish with salt, cinnamon, raisins and saffron. Next, they skewered the fish meat into... sausage shape. Though consisting of pike, this fasting dish both looked and tasted like meat! The royal feast ended with a dessert called “ulipki with foam and orange jam”, i.e. an Old Polish version of rolled wafers with cream. The second part of the workshops focused on savoir vivre. We unravelled the intricacies of flatware placing and learned how to properly use cutlery. We studied the principles of precedence and role played both guests and hosts. We took on quite a challenge and attempted to elegantly consume some really difficult dishes! That is how the Museum of King Jan III’s Palace at Wilanów welcomed the European Year of Cultural Heritage 2018 and launched “A Place at the Royal Table” project co-created by 19 royal residencies in 11 European countries. In the coming months, we will cooperate with our large partner museums, i.a. Versailles, Chambord, Potsdam, Sintra and Venaria Reale, to share knowledge of historical cuisine, table culture and taste perception in various European states.