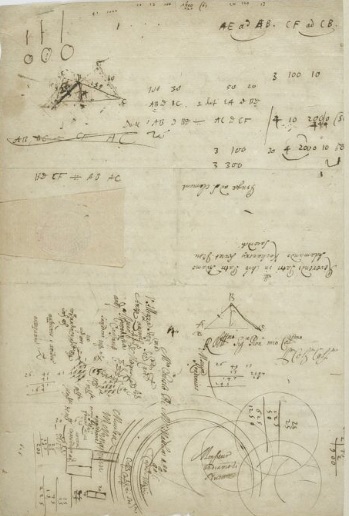 Adam Adamandy Kochański was born on 5 August 1631 in the Dobrzyń region. He attended Jesuit schools in Toruń and discovered his uncommon talent for mathematics during his education. He joined the Jesuit order in Vilnius on 24 August 1652, and, after two years of novitiate, enrolled in the Academy of Vilnius, a well-known centre for mathematics, as a student of philosophy. However, a war against the Muscovites broke out just as he completed his first year of study, and Vilnius was captured by enemy forces, pushing the Jesuits out of the city. The young Kochański was dispatched to Germany to continue his interrupted studies. Initially, he moved to Würzburg, where he met, and cooperated with, the celebrated Jesuit scholar Gaspar Schott. He then enrolled at Molsheim (in 1655–7), taking up correspondence with the learned Jesuit polymath, Athanasius Kircher. Correspondence with Kircher and other scholars constituted an important part of Kochański’s scholarly activity.1 During the Baroque period, exchanges of letters between learned men enabled sharing philosophical and scientific ideas, as well as results. In the seventeenth century, these letters contributed to the formation of a peculiar society of scholars, a respublica litteraria, commanded by rules of solidarity and mutual support in the pursuit of knowledge.2

Kochański moved to Florence in 1666, engaging in cooperation with numerous Tuscan scholars and followers of the tradition of scholarship established by Galileo. The Polish Jesuit’s activities attracted the benevolent interest of the Medicis, a fact proven by the submission of a register of Kochański’s achievements and scientific projects—Elenco di sue invenzioni offerte al Granduca Ferdinando II. In the Tuscan capital, Kochański also mediated in scientific contacts between the scholarly circles of Florence and northern Europe, including Poland.

In 1670 Kochański was sent to Prague, where he lectured in mathematics and began a lasting correspondence with Gottfried Wilhelm von Leibniz. The exchange with the Jesuit scholar was initiated by the German philosopher.3 Meanwhile, efforts were made to bring Kochański back to Poland in hopes of raising the standard of teaching mathematics in Jesuit schools. However, his response to the idea was not enthusiastic—he intervened with the General of the Jesuits himself, asking to be left alone in the West, preferably in the Czech province of the order, where (he claimed) he enjoyed more favourable conditions of scholarly work than in Poland. Eventually, he was transferred to Olomouc, and then (in 1676) to Wrocław.

During Kochański’s stay in Wrocław, the General of the Jesuits received a request from King Jan III Sobieski for Adam Kochański to be dispatched to Warsaw for the purpose of educating the monarch’s son Jakub. The Prince exhibited a keen interest in mathematics, and Kochański seemed to be the only teacher Jan III would consider. The General responded to the King in a letter from late July 1678, stating that his request would obviously be fulfilled, and ordered the Polish Jesuit to depart for Warsaw. Adam Kochański most likely reached the capital toward the end of November 1679, and moved into the Jesuit college, where he taught mathematics. The Jesuit catalogues for the period name him as a courtly missionary (missionarius aulicus), and, since 1691, as the royal mathematician (mathematicus regius). Aside from his responsibilities as a servant to King Jan III, he also conducted scientific research, particularly astronomical observation—for instance, concerning a comet, in 1690. The results of these latter observations were discussed in letters to his friend and fellow astronomer, Johannes Hevelius.

The court of the Polish king proved remarkably conducive for Kochański’s scientific work and personal development. King Jan III was a renowned patron of scholars and artists, providing them with the means to consistent engagement in science and arts. Already in early 1680 Kochański presented the King with a registry of his achievements and scientific undertakings: The catalogue of peculiar inventions in pleasurable mathematics and interesting arts (known as Catalogus inventorum). The registry has since been lost, but surviving accounts suggest that the King showed great interest in it. Sobieski’s erudition and love of knowledge were widely recognised across Europe, just like his military exploits. The King’s relationship with the Jesuit scholar was marked by a mutual understanding best captured in a letter from Sobieski to Adam Kochański dated 4 September 1682, in which the monarch titles him his secretary and mathematician.

At the royal court, the Jesuit scholar forged ties to numerous learned men combined into what might be termed an academy of artists and scientists assembled under the aegis of the monarch. Its most notable members were inventor, astronomer, engineer, and architect Tito Livio Burattini (1617–81), polymath Pierre des Noyers (1606–93) and Jesuit mathematician Stanisław Solski.
In accordance with previous arrangements, Adam Kochański became a teacher for the young Sobieskis, particularly Prince Jakub. The children of the King resided in Wilanów or the Royal Castle in Warsaw, and the latter seems to have been the likeliest place of Kochański’s employment. Mathematics formed a new and progressive part of the education of the monarch’s sons. The method Kochański applied when teaching them is hard to pin down—it is unclear whether he held systematic lectures or introduced them to the curiosities of physics, technical science, philosophy, and mathematics. Kochański tended to approach science and education as scientia curiosa, with an eye for the peculiar, the interesting, and the new—that which might captivate his audiences, strengthening their motivation for learning. The mathematical education of the young Jakub was primarily of a practical nature, bound by the requirements of life and the perfecting of military skills of the potential heir to the throne. Prince Jakub also took lessons in philosophy, and the Jesuit mathematician would certainly seem to have been involved in them.

Aside from lecturing at the Jesuit college and teaching Prince Jakub, Kochański was also engaged in works on interior decoration in the royal residence at Wilanów, particularly the library. One of the most accomplished decorative works in the Wilanów residence directly associated with him is the sundial still found on the southern façade of the King’s Cabinet. Kochański’s contributions to the decorations in the royal residence at Wilanów betray his numerous talents, including a gift for the arts which King Sobieski praised. The Jesuit scholar served important roles at the royal court as Prince Jakub’s preceptor as well as the King’s mathematician, architect, secretary, and librarian, eventually becoming King Jan III’s trusted associate. The monarch’s decision to assign an important mission in Gdańsk to Kochański, on the other hand, testifies to the mathematician’s talents in diplomacy.

Adam Kochański’s sojourn in Gdańsk is recorded in his letters. In his first letter to the German astronomer Gottfried Kirch, from 17 October 1683, Kochański informs Kirch that he has been in Gdańsk for two months, serving as the King’s chaplain and missionary. Among the tasks King Sobieski assigned to the mathematician in Gdańsk was the acquisition of new books for the library at Wilanów. The King also solicited the support of the Gdańsk burghers in hopes of receiving financial backing for his expedition to Vienna. One should note that the situation of Jesuits in Gdańsk at the time was rather problematic given that the Protestant town council opposed their presence in the city. The Gdańsk archives are full of complaints against the Jesuits, but none of them mentions Adam Kochański. The presence of the royal chaplain—a man consumed by the findings of science and the latest publications rather than ministry—did not evoke any negative reaction from the burghers of Gdańsk, and may have even abated the religious ferment in the city over the Baltic Sea.

Kochański had a penchant for making social and scientific connections with scholars of other denominations—among his pen friends were famous Protestants Johannes Hevelius and Leibniz. Kochański obviously met the former, a long-time correspondent, during his sojourn in Gdańsk. As Kochański’s friend, the astronomer hosted him at his home and astronomical observatory, where they engaged in scholarly disputes with other scholars. Kochański also supported Hevelius through his lean years, and after his death in 1687, ensured that his scholarly achievements were properly recorded, for instance, by contributing to the posthumous publication of the Gdańsk-born astronomer’s Prodromus astronomiae cum catalogo fixarum, et Firmamentum Sobiescianum (publ. Gdańsk 1690), which saw print thanks to King Jan III’s financial support. In Gdańsk, the Jesuit mathematician also supervised the work of the King’s chancellery and collected information on technical novelties, e.g. concerning the production of firearms.

Also during his Gdańsk sojourn, the Jesuit mathematician forged a connection with the Acta Eruditorum magazine, one of the first scientific periodicals in Europe, to which he contributed scientific studies. Kochański’s article on squaring the circle, published in the magazine in 1685, warrants particular attention since it brought the scholar worldwide fame and remained a fixture in the history of mathematics.4

In 1690 Kochański returned to Warsaw from Gdańsk and went back to his lectures in mathematics at the Jesuit college. Outside of that, the scholar visited the residence at Wilanów, where he continued to serve as the royal librarian. The position did not entail the typical work of a librarian, but consisted in caring for the collection itself—e.g., acquiring the latest publications—and in maintaining contact with the King, a famous book-lover. In 1691 Kochański resumed his correspondence with Leibniz; their letters include references to King Sobieski, a figure Leibniz admired for his interest in acquiring knowledge and exceptional erudition in history and geography. Kochański invited the German philosopher to visit the royal court, assuring him of the Polish King’s willingness to hear about his achievements and scientific projects. Leibniz did plan for a trip to Warsaw in January 1693, but he was pegged back by his responsibilities toward his protectors at the court in Hanover.

Due to his delicate health, Kochański obtained the King’s permission to recuperate at Teplice in Bohemia. He left Warsaw in 1695 and took up lodgings at the palace of his protector, Jan Marek de Clary-–Aldringen. Aside from receiving treatment for his progressive paralysis, the Jesuit scholar also conducted scientific research. As his correspondence with Leibniz suggests, he was fascinated by the idea of a perpetual motion machine (perpetuum mobile), as well as calculating machines and the Chinese language, in the context of a search for a universal language. At Teplice, Kochański received the sad news of the death of his king and protector, Jan III Sobieski. Aware of the situation in Poland, the Jesuit mathematician realised the dramatic implications of the interregnum. Thus, fearing for the future of his fatherland, he sent many letters to Poland, mostly to the eldest son of the departed monarch, diplomats from neighbouring countries he had met in the past, and local magnates. Kochański hoped that the throne would be claimed by his pupil, Prince Jakub Sobieski. Leibniz read Kochański letters about Poland in the wake of King Sobieski’s death with great understanding. Kochański’s last known letter to Leibniz was written on 11 June 1698. After that, the scholar would only descend deeper into his grave and prolonged illness. Adam Kochański died in Teplice in Bohemia on 19 May 1700.

The years Kochański spent in the service of King Jan III Sobieski have been his most productive in terms of contributions to science.5 The period saw his most worthwhile designs and scholarly treatises, published in Acta Eruditorum and other outlets, as well as the correspondence with Leibniz and other scientists. The royal court gave the Jesuit mathematician the stability he had longed for to conduct scientific and didactic work.