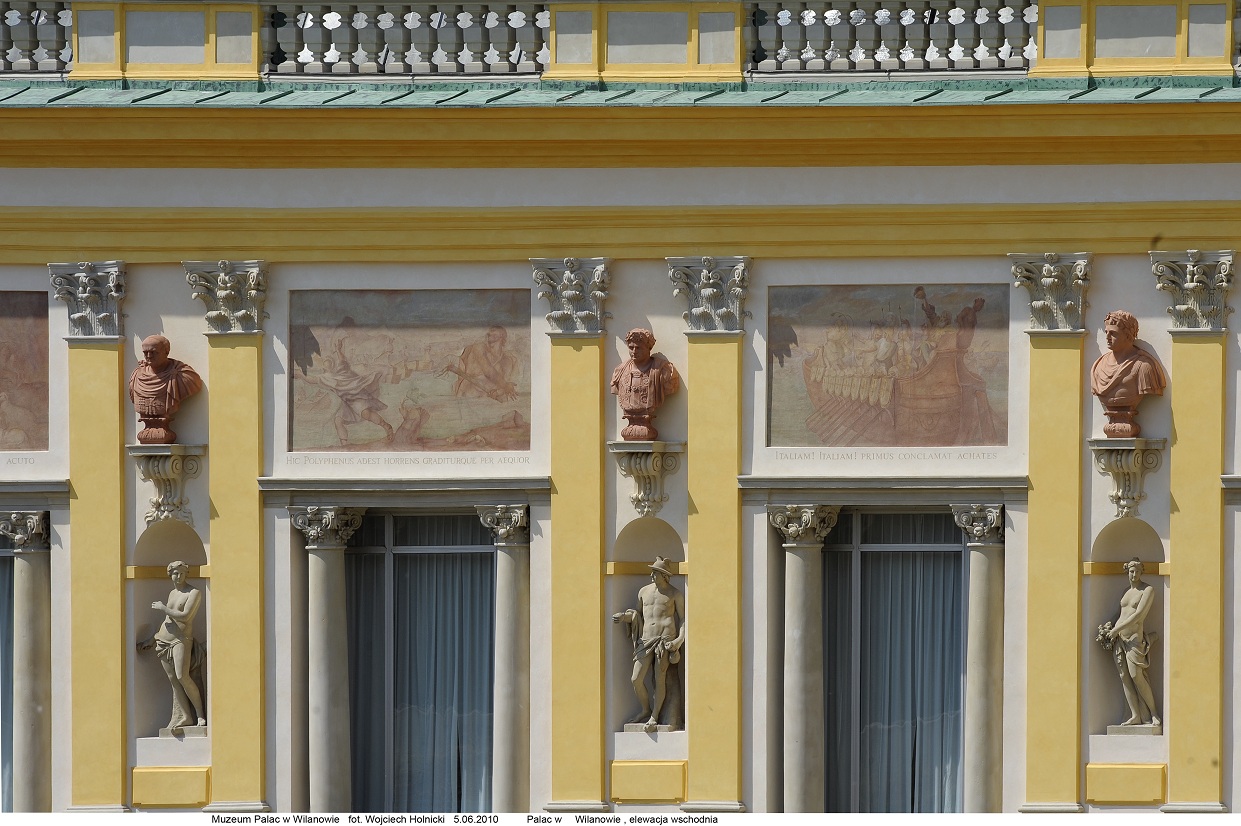 Fresco with scenes from the Aeneid on the garden elevation in Wilanow Palace.

Nobles in the first Commonwealth eagerly invoked the ancient Rome when considering the state’s political system as well as social and everyday life. Eminent Greeks were also appealed to, though somewhat less frequently, especially to demonstrate the gentry of outstanding figures (Epaminondas of Thebes was a typical role model quoted) or to support one’s argumentation in a scientific discourse. Although Sarmatians waged wars against Romans in antiquity, Nobles of the Commonwealth of the Two Nations traced their roots in ancient Sarmatians, but simultaneously identified themselves with customs practiced by former Romans. One of such customs functioning as a Rome-and-Commonwealth parallel was education carried out both at schools and within noble family circles. Virgil’s Aeneid was included in the curriculum (or ratio studiorum) of public and church schools. Although Jesuit colleges attached less importance to preparing young nobles for an active participation in the public life, yet all types of education systems strove to teach attitudes based on universally acknowledged values. One of recommended role models was Aeneas, the key protagonist of Virgil’s epic. Apart from excellent literary merits helpful in practicing the Latin style, the poem constituted a superb tool for purposes of education. It provided the possibility for an allegoric interpretation of Aeneas’s fate and contained numerous statements that assumed the proportions of maxims.

Published in Cracow in 1590 was the first translation of Aeneid into Polish made by Andrzej Kochanowski. In a panegyrised poem addressed to Jan Zamoyski, chancellor and hetman of the Crown, Kochanowski indicated his patron as an initiator of his translation. In the summary of the first volume, the translator referred to Aeneas as ‘a statesman of virtue and personal bravery’.

When writing his epic, Virgil implemented the principles of Augustus’s political programme. By stressing divine descent of the protagonist, the writer honoured the entire gens Iulia, including the first emperor of Rome. Book six features a scene of Aeneas meeting his father Anchises in the underworld. Virgil used the scene to sanction the Roman reign over the entire world. Above all, the main protagonist personified all the features which the princeps took on propagating in the society weakened by civil war.

The most significant of Aeneas’s virtue was pietas, the term denoting reliability, piety and love. Having arrived from Troy, the stranger introduced himself to Venus by saying, ‘I am Aeneas and I meet my ethical obligations’ – sum pius Aeneas. By virtue of feeling obliged towards gods, his homeland and his relatives, Aeneas perfectly matched the nobles’ ideal of piety, service for the Commonwealth and cultivation of family traditions. Moreover, Virgil’s hero was ready to give up his personal happiness when fulfilling acts of providence. The moral code governing his conduct included other virtues such as discipline and obedience to both gods and destiny, mercy on the enemy (unless it breached bonds of friendship), valour and responsibility for people entrusted to his care, which did not permit to lose heart in the face of adversity. Virgil represented Aeneas as a man of the moment, and his wander – as not at all accidental. The conviction of an established, hierarchical order of the universe and its dependence of the supernatural world was particularly strong also in the Sarmiatian mentality.

Aeneas could serve as a role model for young people as well as those exercising power. In his Latin treatise On Perfect Poetry, i.e. Virgil and Homer, Maciej Kazimierz Sarbiewski referred to the Trojan protagonist among others as ‘the best king and ruler’. Moreover, the Jesuit considered Aeneas an excellent legislator, priest, citizen and soldier, to name but a few. Sarbiewski regarded the entire Aeneid as ‘a mirror of national, political, plan-oriented and ethical sagacity’.

Virgil’s writing was well-known to Jan Sobieski’s great grandfather, Stanisław Żółkiewski. Killed in action in 1620, hetman Żółkiewski cited an excerpt of the twelfth book of Aeneid when addressing his own son in his will. He quoted Aeneas’s words spoken to Ascanius, ‘My boy, learn from me the virtue and the true labour’ – Disce puer ex me virtutem verumque laborem. Żółkiewski’s descendants, Marek and Jan Sobieski studied Virgil’s works at the Cracow-based Nowodworski College. Stanisław Żółkiewski, bearer of the Lubicz coat of arms, was highly praised by the heraldist Szymon Okolski. Apart from composing his armorial, he also gave an account of events that took place in 1637 in his Diary of War Process Between the Crown and the Zaporizhian Armies. In the diary he interpreted a military incentive as Virgil’s call never to give in to adversity but rather to face it with more bravery (Tu ne cede malis sed contra audentior ito).

In the time of partitions, Poles discerned a resemblance of their own Commonwealth to Troy. They believed that, just like Aeneas’s homeland resumed its continuation in Rome years later, so will they rejoice one day in Poland’s regained independence.