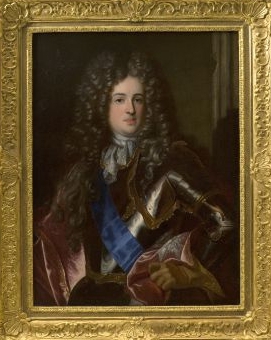 Aleksander Benedykt Stanisław Sobieski (1677-1714), the second son of Jan III Sobieski and Maria Kazimiera. A humanist by choice, but carefully educated in the art of war.

In 1696-1698, after the death of his father, Aleksander almost constantly accompanied his mother. Started an affair with Elżbieta Sieniawska. Refused to become politically engaged, and although he acknowledged the rule of Augustus II he probably never swore a formal oath of loyalty to the king. When the beginning of the Northern War created hopes for a crown for Prince Jakub, Aleksander supported his brother.

In February 1704 the princes Jakub and Konstanty were abducted near Wrocław upon the order of Augustus II and imprisoned in Saxony. Aleksander became a pretender to the Polish crown,  backed by Charles XII of Sweden and Primate Michał Radziejowski. He protested against this plan, quite possibly fearing the political revenge of his former lover, Sieniawska, and his brothers. After Charles XII set them free in December 1706, Aleksander withdrew from political life and in 1710 moved to Rome together with his mother; the local climate was beneficial for his rheumatism. In time, became involved in cultural life and was known as a poet as well as a lover and patron of the arts. Staged opera spectacles at his private theatre.

At the end of his life, the ailing prince sought solace in prayer. He died in Rome, where he was buried in a Capuchin church.