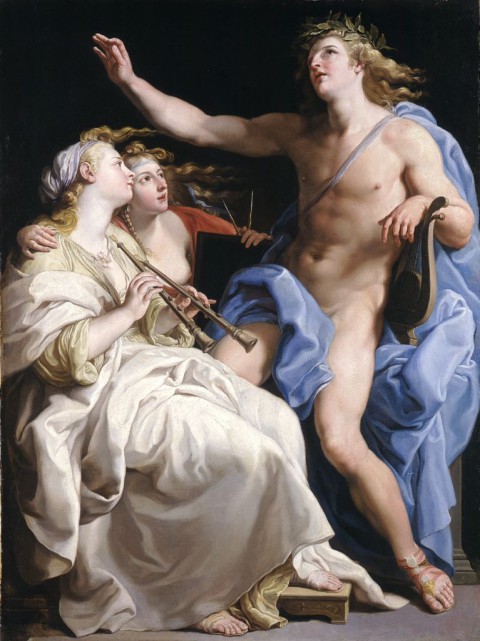 Allegorical paintings by Master Batoni: Apollo and Two Muses and Allegory of Architecture, Painting and Sculpture, both studio replicas, occupied a relevant position in the Wilanów collections. Emphasis was placed on their high artistic quality and, as a rule, the canvases were displayed together. Batoni’s original works, today in private collections in Turin, were executed for Francesco Conti of Lucca, one of the painter’s patrons. First, the artist executed Allegory… (prior to 8 May 1740) and completed Apollo and Two Muses in January 1741. In about 1820 they were purchased from Conti’s heirs by Jean Paul Meuron and were inherited within his family until 1942. Subsequently, they belonged to Count Palermo Spada di Lavina of Turin, and in 1961 once again changed hands. From the very onset, the two compositions had numerous enthusiasts and were copied upon numerous occasions, while copies executed in the Batoni atelier were treated as the painter’s original works. They are to be found in assorted European collections, i.a. the Louvre.

The exceptional popularity of the two canvases stemmed not only from their artistic value, but from the inspiring themes and conveyed iconographic contents. Allegory… contains references to Iconology by Cesare Ripa, universally familiar to eighteenth-century art connoisseurs, as confirmed by drawings from the Batoni sketchbook. Another model emulated by Batoni was an engraving by Fontenelle from 1725, executed after a drawing by Bernard Picart and based on a composition by Hiacynthe Rigaud. Deciphering the philosophical and aesthetic ideas contained in these unusual paintings and discovering their sources calls for further research. It is quite likely that the two works comprised an iconographic whole, probably a depiction of the fine arts, whose rank was regarded as equal to that of the liberal arts. Apparently, Apollo is shown as the symbol of ideal divine music - the harmony of the celestial spheres, while the Muses gazing at him – Euterpe and Urania – personify music and astronomy, whose supplement in the second, lost canvas are the personifications of Architecture, Painting and Sculpture.

The Wilanów Top 15 presents the most valuable, extraordinary and beautiful works of art from the Wilanów Palace collection. The exhibits originate from all over the world, from ancient Rome through 17th-century Japan to ateliers of the French masters. Their history reflects the lives and fate of people related to the Wilanów residence. Get acquainted with the exhibits, view and admire them only to rediscover them later in the palace interiors.

From Sarmatia to Arcadia – mythologisation of space in noble culture

A space that is important for a given society is associated with positive features only. This was the case of …