Apotheosis of Jan III Sobieski as a Roman Emperor 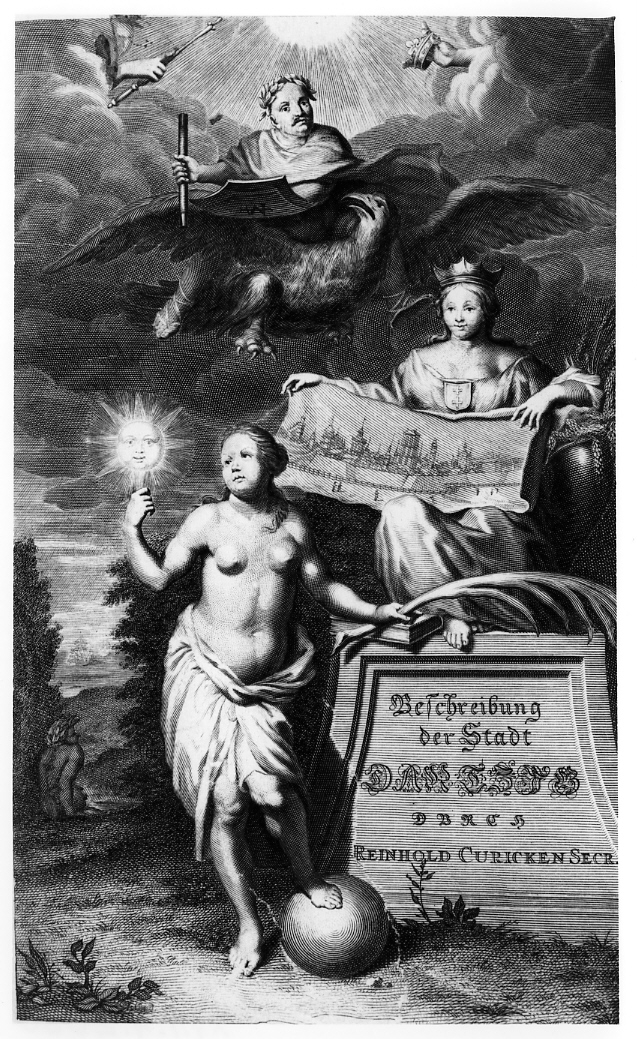 An anonymous Dutch engraver (?): Apotheosis of Jan III Sobieski as a Roman emperor.

From an early stage, i.e. 1654 onwards, life and activity of Jan Sobieski were connected with Gdańsk and Pomerania. After ascending the throne he paid a number of visits to the prosperous city on the River Motława and dedicated a lot of attention, time and funds to its proper functioning. He was remembered by Gdańsk inhabitants as a generous benefactor and patron, who took special care of astronomer Johannes Hevelius and constructor Bartłomiej Ranisch, to name but two.

It is therefore not surprising that Reinhold Curick’s work Der Stadt Dantzig historische Beschreibung (Amsterdam und Dantzig 1688) published already in Sobieski’s lifetime includes a portrait of the benevolent monarch. The printed title page is preceded by an unsigned engraving (copperplate with etching) of high artistic level, constituting in fact a second fully printed title page. The terrestrial field presents two female allegories: the standing Veritas (Truth) holding the Sun and a palm, and the standing personification of Gdańsk holding a paper scroll which depicts the city panorama. Hovering above them on an eagle like divine Jupiter there is Jan III wearing a laurel wreath on his head, antique-like sandals on his feet and a coat, holding a baton and a shield with the monogram 13. Eagle – “the heavenly bird” and an attribute of Jupiter – was regarded as the king of birds and the bird of kings. Sobieski’s apotheosis clearly refers to apotheoses of Roman emperors, soaring to the sky on eagles. Above the hero’s head tumbling clouds are parting and revealing light and two hands holding a sceptre and an open crown.

The author of this charming print is unknown, the same in fact applies to the author of its drawn (or painted) prototype. Known is the fact that the majority of 52 plate prints published in Curick’s work, dedicated to the mayor and councillors of Gdańsk, were composed based on drawings by Piotr Willer and Andrzej Stech. Unclear remains the question of the printmakers, i.e. whether they were Gdańsk or Dutch artists or perhaps both.