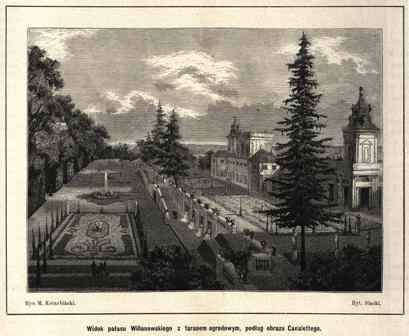 The view of the Wilanow Palace, picture from the album of J. Łoski

François Paulin Dalerac, a French courtier of Jan III Sobieski and Maria Kazimiera, who resided in Poland for more than ten years (with intervals), appeared to have taken a dislike to the new royal residence near Warsaw. In his diaries, he complained: "Wilanów does not resemble a royal residence but more a private house, and is not equal to what our financiers or more prosperous judges build in the environs of Paris. The garden, the orchard, the flowerbeds surrounding the palace are by no means extraordinary, and there are no fountains or gazebos”. This rather unflattering opinion was formulated probably during the first phase of redesigning the palace under the supervision of Augustyn Wincenty Locci (c. 1640 – 1732), a Polonised Italian of the Lew coat of arms, an amateur architect and Sobieski’s secretary and artistic adviser.

Augustyn received a Polish indigenate from King Michał, subsequently  confirmed by Jan III and then expanded so as to include the three Locci brothers, with an unambiguous establishment of the famous coat of arms. The king (who called his secretary aulicus intimus et secretarius noster) designated a yearly revenue of 2 000 zlotys from the Wieliczka salt mines (1675). Born probably in Warsaw, Augustyn Wincenty received primary education from his father - a royal architect of the  house of Vasa - and then was trained by the architect Ghisleni. Further knowledge was supplemented by a stay in Rome (about 1680) and direct contacts at the Sobieski court with the leading architect Tylman of Gameren and other royal artists.

Augustyn worked primarily for Jan III, building the residence in Wilanów  in 1677–1696. According to the architect’s correspondence (24 letters addressed to the king, kept in Preussisches Geheimes Staatsarchiv in Berlin), he created the fundamental architectural “outlines” of the palace, provided construction solutions and arranged the decoration programmes for the interiors and palace facades. Furthermore, Augustyn supervised painters, sculptors, stucco masters and all sorts of artisans. He also laid out the gardens and directed water engineering. He was busy also in other residences of the monarch: decorated the castle in Żółkiew (1679), supervised the outfitting of Warsaw Castle (redesigning, installing fireplaces, etc., 1681) and oversaw the construction of the Capuchin church and monastery funded by Sobieski in Warsaw. In 1683, Augustyn made a plan (non-extant) of Warsaw. He also carried out commissions from members of the royal family and the entourage of Jan III (the Radziwiłłs, Szczuka). Locci, who never regarded himself as a professional architect or equalled Tylman de Gameren, exceeded other court architects (Affait, Bellotti) as regards ingenuity, esprit and skills. Furthermore, he had at his disposal considerable technical inventiveness and technical draughtsmanship, rather rare proficiencies at the time.