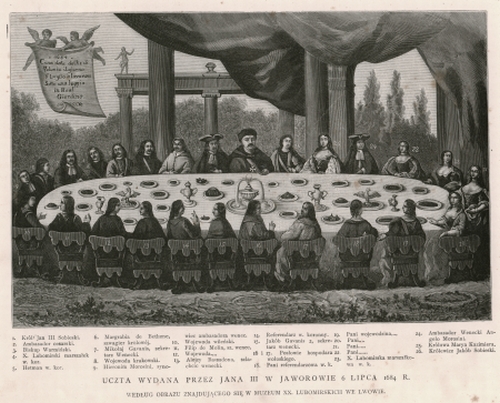 An anonymous Warsaw engraver, based on a painting by Frans Geffels: Banquet in Jaworów, picture from the collection of National Library.

Jaworów, a little town situated 48 kilometres north-west of Lviv, counted among the favourite residencies of Jan III Sobieski. It boasted a wooden royal castle surrounded by a beautiful garden with baths. Jaworów was vibrant with life; it hosted senate councils, receptions of envoys, ceremonies (for instance the christening party of Prince Aleksander in 1678) as well as sumptuous receptions. The most famous of all was the banquet given by the monarch on 6 July 1684 in the garden house for Polish dignitaries and foreign guests. Apart from the royal couple and their son Jakub Ludwik, the reception was attended inter alia by the emperor’s ambassador Count Karl Ferdinand von Waldstein, Bishop of Warmia Michał Radziejowski, Crown Grand Marshal Stanisław Herakliusz Lubomirski, Crown Grand Hetman Stanisław Jan Jabłonowski, Voivode of Cracow Feliks Kazimierz Potocki and a large representation of Venetian envoys including senator Niccolo Gaveni (Gavani).

In ca. 1685 the ceremonial banquet in Jaworów was depicted in an oil painting, probably commissioned by one of the Italian participants (possibly Niccolo Gaveni?) and executed by a foreign painter active outside of Poland. Old native literature of the subject considered the painting (found at present in the National Museum in Wrocław, formerly in the Lubomirski Museum in Lviv) a copy of a piece “created contemporarily by an Italian painter” (Jerzy Mycielski) and associated it unambiguously with the patronage of Jan III. Currently the discussed painting is attributed to Frans Geffels, an artist from Flanders, active in 1635–1699, from 1663 the court painter in Mantua and temporarily employed by the Viennese court. Italian provenance of the work of art is suggested not only by Italian inscriptions filled with errors in Polish surnames and place names but also by schematic images of Polish dignitaries, contrasted with diversified effigies of the Venetians.

The composition features a large table with 26 sitting guests viewed in profile or in ¾ and marked with numbers, and a corresponding legend at the bottom. The scene is set outdoors against a background composed of trees and a monumental colonnade partly covered by drapes. In the upper left corner there are two putti holding a drapery with the date 1684 and the Italian title Cena data del Re di / Polonia il giorno / 6 Lvglio in Javorovo / Sotto una loggia / in Real / Giardino. Geffels’s painting was copied twice in the nineteenth-century Polish graphic arts. In 1842 it was copied in a poor quality pen-and-ink lithograph by Adolf Nigroni von Riesenbach, released in the “Przyjaciel Ludu” [“A Friend of the People”] periodical from the Wielkopolska region. In 1883 an anonymous Warsaw printmaker made an impressive, full-plate woodcut which illustrated Józef Łoski’s work entitled Jan Sobieski, jego rodzina, towarzysze broni i współczesne zabytki [Jan Sobieski, his family, comrades-in-arms, and contemporary monuments] (Warszawa 1883). The painted legend from the prototype was replaced in the print by a printed text laid out in six columns, just like in the original.

An anonymous Warsaw engraver, based on a painting by Frans Geffels: Banquet in Jaworów, woodcut, publ. 1883.