Benedykt Chmielowski on the Culture of the Turks Roman Marcinek 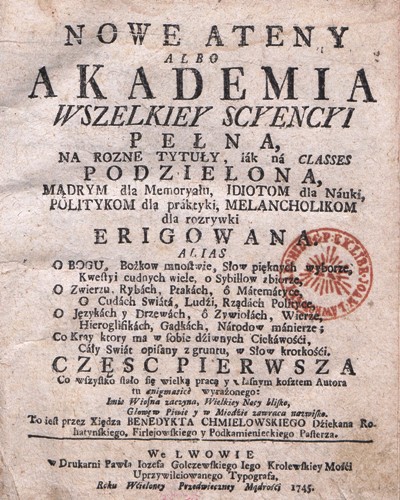 In the 18th century, more people could read than write. Those who were curious about the world could reach for the famous encyclopaedia by priest Joachim Benedykt Chmielowski (1700–1763), a Jesuit scholar, residing mainly in Firlejów, who devoted himself to compiling works from various fields. He penned, among others, an abridgement of Cesare Ripa’s Iconology (Figurae emblematicae), extracts from the Lives of the Saints (Messis aurea), a prayer book Bieg roku całego (The Course of the Whole Year) (1727). He has remained in the memory of posterity thanks to his monumental work Nowe Ateny albo Akademia wszelkiej sciencyi pełna […] mądrym dla memoryału, idiotom dla nauki, politykom dla praktyki, melancholikom dla rozrywki erigowana (New Athens or the Academy full of all science […] ssued for the wise to recollect, for the idiots to learn, for the politicians to practice, for the melancholics to entertain) (1745–1746). This extremely interesting mix of knowledge and superstition, repeatedly reproved as an example of the ignorance of the Saxon times is not, however, deprived of charm. The voluminous work contains countless information from mythology, the history of the Church, demonology, astrology, nature, zoology, geography, medicine, politics, art, everyday life, and many other branches of knowledge. The encyclopaedia was a collection of uncritical quotations from ancient and medieval authors, a compilation of Jesuit works and the author’s confabulations. However, due to the scarcity of real scientific works published in Poland at that time, this oddity of false erudition (a beautiful example of baroque prose, though) became an inexhaustible source of knowledge for the Polish Sarmatians.

New Athens could not omit information about the Turks with whom the Commonwealth waged, with varying degrees of success, long-term wars. In the mid-18th century, the fear diminished but interest in oriental traditions was still vivid, and often associated with a thrill of emotion. The chapter devoted to them begins with the words “They do not drink wine unless furtively, they do not eat bacon, because these two things are Haram for them, it is vile”. As can be seen, it was what he considered the most significant difference. Elsewhere Chmielowski adds: “Turks do not drink wine, because Muhammad, their Pseudo Prophet banned  it strictly as it is an occasion for a drunk man to do any evil”. And almost on par with this aversion to alcohol which seemed astonishing to a Sarmatian, he emphasizes their war courage: “To be killed in war against Christians is for them a sign of blessing. Going to war, they leave to their wives, children certas sortes, they take a lot of riches with them to be able to buy themselves out of captivity (if taken); and if killed,  to have pretiosam mortem on them so that their enemy would have good opinion of them that they were not Mendycy [beggars]”.

However, the author’s opinion on their nature and morality was not high. “The Turks are truces, i.e. cruel to their kin and strangers, haughty, deceitful, treacherous. And like all Asian nations, peculiarly those from the south, the Turks, above all, are molles, voluptuosi, immersed in carnality, polygamous ad mentem of stupid Alkoran.” Appreciating their characteristics of warriors, he disregarded, quite wrongly, their economic capabilities. “They are not interested in farming or housekeeping, using slaves to do harder works, and themselves doing delicate ones”. He scornfully writes about their respect and tolerance towards the conquered lands and the standards, e.g. administrative ones, absorbed from Christian Europe: “Whatever they conquer, they abolent the names of places, Towns, Villages, Kingdoms, regarding particularly Greek and Latin vocabula as suspecta. Therefore you can see marvellous ruins in their country where the Wonders of the world were. They are Simiae, or monkeys, whatever they see in Christian countries in politicis, they at home imitantur, regarding themselves to be the original authors and not imitators.” He claimed groundlessly that the Turks themselves doubt the durability of their power: “However, they do not promise diuturnitatem of their Reign but that Primogenitus Ecclesiae, that is the Frenchman will  take their State from them. Cornelius a Lapide [Cornelis Cornelissen van den Steen, a Flemish Jesuit and scholar who died in 1637] says in praefatione great Minores Prophetas that apud Turcas in fatis est & certum quasi oraculum, suum Imperium a Polonis evertendum. On the other hand, other Turks have it in Proverbio that they will be conquered by the Red-Haired, i.e. by Muscovy, as far as to the Red Land, that is Damascus. And because the Turks expect a Christian irruption into Judea from Alexandria, they do not allow ships into the old Port. And because the said irruption is expected on a Friday, i.e. on their Shabbat, they keep watch on their Mosques on Fridays.”

It must be admitted that history vindicated the stories and it was by the Russians that the Turkish power was broken. It is true that it happened many years later, but still. Chmielowski and surely his readers were interested in social aspects. “Turkish Music is drums, zurnas; liquor: sherbet, masłok [Wacław Potocki wrote about it: a drink made of different herbs, intoxicating and driving people mad]. Some [Turks] dance, but in a peculiar manner, oddly fast. They spin around, suddenly stopping, sinking in a kind of admiration.  They locate their cemeteries by the public highways in order for the souls of the dead to be able to have suffragium from the travellers. The poor are buried without coffins, only with their faces wrapped in a cotton scarf, the rich in marble urns, but with soil added under and on the corpse in the coffin. Their simple women pray at home, not in Mosques; their faces are covered when they go out, except for the Constantinople women, who have the privilege, and only in Pera and Galata, the Istanbul's suburbs.”
The Jesuit scholar was more vividly interested in the women of the East and notably in harems: “The Turks enter the state of wedlock before their Kadyas [Qadis], that is, judges (who also are clergy). There, the Husband appears alone and declares secure maintenance for his wife which she will own after his death or separation, and the Qadi enters this in his  books. The name of his wife at the wedding and marriage contract must be that of her Father, Brother or a close [male] relative. The Turks are allowed to take a wife of any religion as long as it is wise and has Books, Laws, Scriptures concerning itself. Ordinary Turks are not allowed to have more than four wives, not under Alkoran, but under public Law. The distinctiores rich men, Lords, have plenty of wed and unwed wives. The emperor himself a few hundred. In Cairo,  during the stay there of Prince Mikołaj Radziwiłł, one Merchant had 12 white mistresses and 18 black ones living in separate lodgings. Hence and from the knowledge of Alkoran patet that any Beatitudo of Muslims depends on carnality which the Prophet promises also in Paradise. It is a practice among the Turks that they take wives not for a lifetime, but for some time, before the Qadi, e.g. for a few months, for half a year, one year, recording certum quantum, which happens in favorem of Hospitable Muslims.” And that is all. Surprisingly little, considering the years of neighbourhood, numerous wars and lively trading.