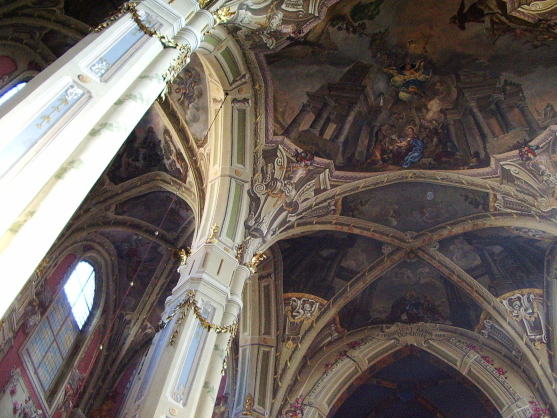 In modern times urban centres famous for their scientific life and academies were often referred to as ‘Athens’. An example of such a simile was the application of the estimable Greek city’s name in reference to the Cracow Academy. The school in Raków was nicknamed ‘the Sarmatian Athens’, while Leiden with its university were called ‘the Batavian Athens’.

Published in Lviv in 1745 was the first popular encyclopaedia in the history of Polish literature. Part two was released one year later. Its new edition appeared in the second half of the 18th century. Its author was Reverend Benedykt Chmielowski (1700–1763), ‘dean of Rohatyn and Firlejów, shepherd of Kamyanets-Podilsky’, one of the most frequently mentioned figures of Saxon times. His work, entitled in line with the spirit of the age, the author dedicated to the Providence, unwilling to pick his protectors from among well-off patrons. Part two of the encyclopaedia was dedicated to starost Szymon Łabęcki. His New Athens or Academy Filled with Various Forms of Science, Divided into Different Class-Resembling Titles, Erected for Memory of Scholars, Education of Idiots, Practice of Politicians and Entertainment of Melancholics […] had the key task of providing clergymen, noblemen, politicians and scholars with knowledge of theology, sciences, history and customs of other nations. Apart from promulgating condensed knowledge, the publication also fulfilled an important task of ludic nature, which in fact impacted the selection of topics and the manner of their presentation. Chmielowski’s encyclopaedia contained a lot of information pertaining to the supernatural (mirabilia). The author’s extensive erudition made it additionally interesting for nobles at large, frequently marked by obscurantism and narrow-mindedness.

In 1743 the book was approved by clerical authorities represented by Mikołaj Ignacy Wyżycki, Archbishop of Lviv. In his approbation composed in Latin, Wyżycki observed that the publication was impatiently awaited by many. In preface addressed to the reader, Chmielowski described his technique of writing the encyclopaedia. He mentioned that it constituted an outcome of thorough reading of a few hundred books and of his hard work (elucubration). He went on to list ‘the columns and pillars of Athens’, i.e. the authors he referred to when composing his work. The catalogue, repeated in an abridged form in part two, indicated source material of information contained in the compendium and lent credence to them.

In some parts Reverend Chmielowski’s work revealed a sanctimonious character, as the author’s mentality was deeply enrooted in Sarmatian religiousness. He took up the topic of holy relics and miraculous images, striving to render his accounts scientifically credible. A literary interpretation of the Bible often led Chmielowski astray and resulted in absurdities. Alongside valuable source information, his encyclopaedia contains among others reflections on eternal salvation of Emperor Trajan and on the shabbiness of atheists. Regarding other Christian denominations as heresy and schism, the author recognized the primacy of Roman Catholicism. In New Athens Chmielowski discussed also the topic of demons and supernatural phenomena. Although he tackled such issues with greatest seriousness, admittedly there were elements of thriller literature traceable in his writing. The author’s broad interests were reflected in his description of far-away countries and characteristic features of individual nations. He considered Poles the most famous of all Slavic nations. He glorified the golden freedom by comparing it to ‘a priceless diamond’ and praised one of its pillars, namely the liberum veto. His lack of critical assessment of the real condition of the state and his consent for the existing social structure reflected the mentality of many a noble reader of his encyclopaedia.

Chmielowski’s work provided explanations of some words and proverbs, as exemplified by ‘To stop the conversation dead’, meaning to say something not a propo[s]’. In his explanation the author went on to cite an anecdote illustrating the origins of the proverb.

The language used in the encyclopaedia was Polish interwoven with Latin borrowings. The author himself remarked in the introduction that he was not aiming for high-style Polish.

New Athens were severely criticized by men of the Enlightenment. The work was regarded as a symbolic decline of the Saxon culture. The encyclopaedic famous definition of the term ‘horse’ to this day evokes a smile. The following generations of receivers were put off by pretentious titles of some of the chapters and by the selection of the discussed issues. Although New Athens certainly cannot be regarded as a source of fully credible information, nevertheless the work should not be rejected a priori. After all, it constitutes a tangible evidence of a scientific effort made by a man with a passion for spreading knowledge. It reflects the general mind-set characteristic for inhabitants of the Commonwealth of the Saxon times. Attempting to defend his work against potential charges of the severe critic Zoilus, in the opening part of his work Reverend Chmielowski quoted inter alia the Latin sentence by Pliny the Elder, ‘No book is so bad that it fails to provide at least partial help.