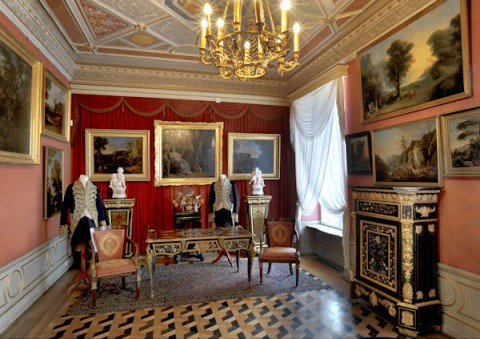 A set of cabinet furniture composed of two cupboards and a table-desk, stands out from the remaining fittings of the Wilanów Palace due to its outstanding decorativeness. Their smooth black surface veneered with ebony and encrusted with brass veins was additionally enriched on the façade side with panels made of black compact limestone of a colourful artistic decoration composed of semi-precious stones arranged in form of bouquets, fruit, butterflies and birds. 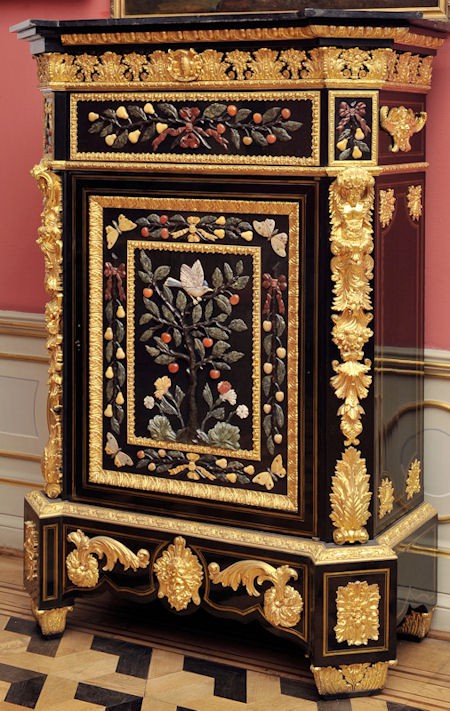 The cornices, edges, bordures and corners were highlighted by profusely sculpted  gilded bronze elements. The set of furniture was made in Paris in the 19th century. Similar furnishing decorated apartments of Napoleon III.

The central part of the cornice crowning the two cupboards contains the Pilawa coat of arms of the Potocki family. Its presence signifies that the set of furniture was created in a Parisian workshop and commissioned by the Wilanów owners. It was brought to the Wilanów Palace by August Potocki. 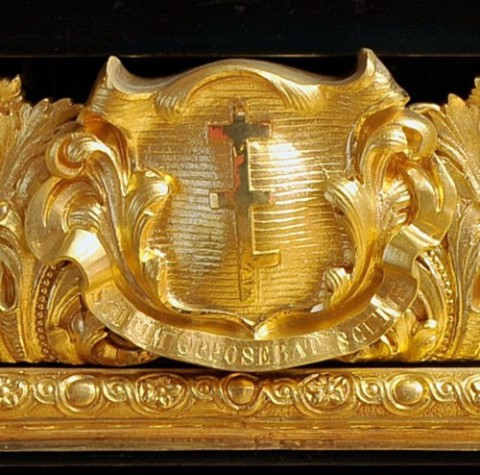 Due to their deteriorating condition, and owing to their high artistic value, in 2006 the pieces of furniture underwent thorough conservation.
Damages affected mainly the external structure of the pieces. In some spots the veneer was coming off or missing; the same applied to the metal encrustation in form of tiny veins.
However, the most serious problem consisted in the extensive (circa 70%) loss of the colourful stone applications on both the cupboards and the sides of the table.

>> compare before and after conservation

In the past the elements coming off had been reinforced many times with the use of various types of glue, both natural and synthetic, as proved by laboratory test results. Due to the risk of the decoration’s further peeling, it was decided that it would be completely dismantled.  As all the original parts had to be repositioned, every detail was recorded and given a number.

Either cupboard was covered with the total amount of circa 300 pieces of tiny, decorative elements made of over a dozen different semi-precious and decorative stones originating from various parts of the worlds. 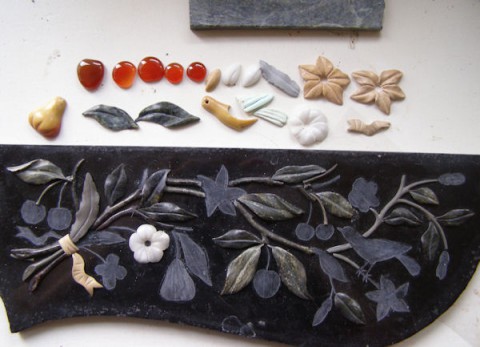 Based on the reconstructions carried out with geology and jewellery experts as well as extensive petrographic research, it became possible to identify unambiguously the types of stone originally used, which in turn helped to reconstruct the elements faithfully. Thus, the missing details of fruit and stalks, insects, leaves, stems, tree boughs and branches and ribbons bows – all on the basis of extant elements.

The only problematic fragments were the ones with no existing analogy for the reconstruction, as exemplified by a large front panel wherein a cherry tree was only fragmentarily preserved. The outline visible in the panel revealed the overall shape of the missing motif.  The missing forms were modelled first in Plasticine and only then in the appropriate type of stone. 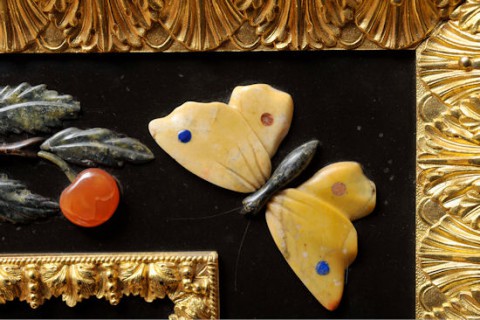 The rock materials used come inter alia from Africa (mudstone), Brazil (carnelian), Albania (red marble) and finally Poland (limestone, Kielce marble). It was important to select stones that would match both the colour and the veining. Individual stone details were initially worked with small cutters and micro grinders, and later manually dressed and polished. Since some of the original fragments revealed to have been coloured, the reconstructed elements were coloured likewise. Details prepared in this way made it possible to reconstruct the entire composition. The final stage of  the conservation consisted in protecting the surface of the stone panels and the application with microcrystalline wax and polishing to give them a shine. 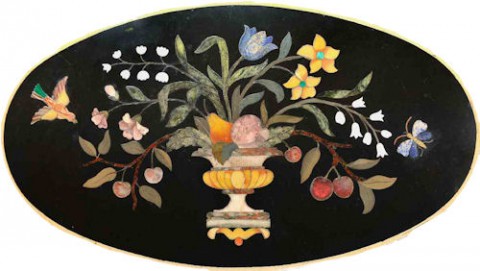 The meticulously executed conservation activities, which lasted over 12 months, restored the former splendour of the period set of furniture and highlighted its beauty. Stone-appliquéd and encrusted set of furniture constitutes a rarity, which makes it the more interesting. Visitors are invited to view it on display in the Landscapes Gallery situated in the northern wing of the Wilanów Palace.