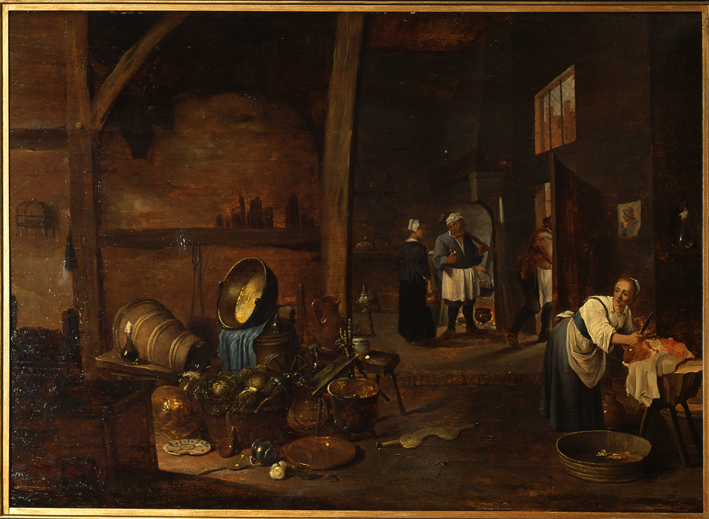 The interior of the kitchen, David Teniers the Younger, after 1650. The painting from the collection of the Museum of King Jan III's Palace at Wilanów. Photo. by Z. Reszka

Among the forgotten dishes of the old Polish cuisine, a special place was occupied by the capon, the object of dreamy sighs of old Polish gourmets and the synonym of festive meal, and, one could even say, the uncrowned king of the old Polish cuisine. The famous Polish natural scientist, Jan Krzysztof Kluk, wrote in late 18th century: The capon is a rooster whose testicles were removed for fatter meat and better taste. So, it was a castrated and fattened male chicken that grew much heavier than a normal bird and virtually dripped with fat. For our ancestors, famished after numerous days of strict fasting, it was simply a titbit and they could not imagine a proper dinner without one. There was a saying: dinner without a piece of meat and capon is not a good dinner.

The capon occupies a very important and even an honorary place in the first Polish cookbook by Stanisław Czerniecki. The recipes collected by him include, among others, Capon with deer or Capon sausages, Capon with anchovies, Capon with white bread croutons, Whole capons, Capon bigos, Tasty capon and Capon with horseradish, Dutch-style capon, Capon with eggs laid in water, Capon marinated live in vinegar, Capon fried with fatback and the last of the hundred recipes for meat dishes - Capon with caviar. In fact, Czerniecki lists many more capon dishes than one hundred, as the bird hid itself also in recipes for many other dishes, delicacies and even broth. For Czerniecki, the capon was the key to the Polish cuisine and a reliable ingredient in the recipes, where the author left it up to the reader to choose the right kind of meat - in such case, he often proposed a version with capon in the main role.