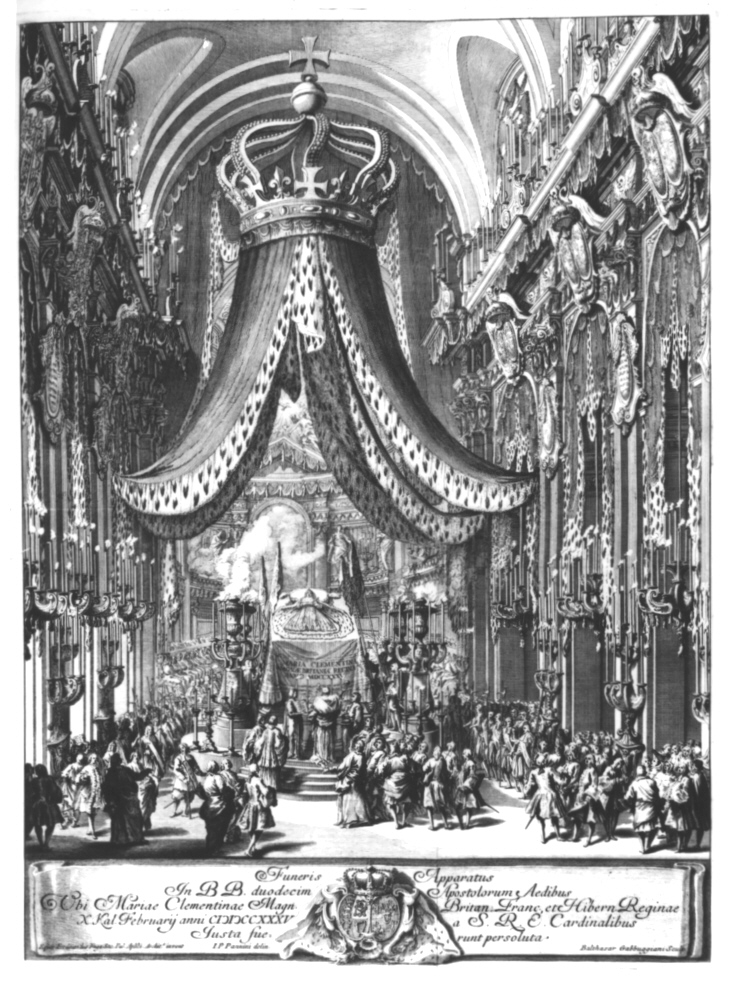 Baldassare Gabbuggiani, based on a drawing by Giovanni-Paolo Pannini: Castrum doloris of Maria Klementyna Sobieska, picture from the collection of the National Library in Warsaw.

Maria Klementyna Sobieska, granddaughter of the great Jan III and the titular Queen of England, Scotland and Ireland, died on 18 January 1735 in Rome at the age of 34. As Maria Niemojowska, a biographer of the last of Stuarts, observed (1992), “Klementyna Sobieska covered a long and odd way from an enthusiastic young girl who boisterously escaped from prison, to a fading, tormented woman, suffering for uncommitted sins”. Admittedly, the miserable, neurotic wife of James III Stuart died in the blaze of holiness, but already her contemporaries knew that Sobieska’s destructive ascetic practices not only destroyed her splendid beauty but also ruined her heath. To put it simply, the young woman starved herself to death.

Pope Clement XII staged a truly royal funeral ceremony of Sobieska. On the strength of a special privilege her body was embalmed in the presence of the papal doctor in the apartment of the general of the Franciscan order at her parish basilica of St Apostles. For three days she lay in state with Swiss Guards on sentry duty until the funeral (February 1719).

Funeral exequies took place in the same basilica, which was decorated for the sake of the ceremony by Ferdinando Fuga (1699–1781), an architect of various apostles palaces, active in Rome, Naples and Palermo. The ceremony was immortalized in a drawing made probably from nature by cavaliere Giovanni-Paolo Pannini (1691 or 1692–1765), a Roman vedutist and landscape painter. The composition was also reproduced as a copperplate engraving by another local artist, Baldassare Gabbuggiani (1689–after 1750?), who created one of the most splendid printed works of art of this genre.

The print depicts a church interior in a central view, with a funeral procession at the catafalque, whose form alludes to a bed of state. Funeral draperies decorated with ermine fall from a canopy shaped like a giant crown suspended above the bed. A multitude of candles are lit. The church is filled with crowds of people. Represented on the catafalque in sharp perspective there is the figure of the dead, a crown on her head and an ermine coat spread wide. Even nowadays Gabbuggiani’s work is powerful in stirring the imagination. We are dealing with a perfect example of a baroque theatrum, whose scale and panache, excellent organization and richness of means transfix the viewer. Related to the copperplate engraving there is an unsigned oil painting of the same topic held in the collection of the Vatican Museums and attributed to an epigone of the aforementioned Pannini. The canvas is a replica of another, larger-size painting from the collection of Museo di Roma in Palazzo Braschi.

The copperplate engraving was made as an illustration for the prestigious publication Parentalia Mariae Clementinae Magn. Britan. Franc. Et Hibern. Regin. Jussu Clementis XII Pont. Max., released in Rome in 1736 in the printing house of Giovanni Maria Salvioni, referred to as the “stampator Vaticano”.