Conservation and restoration works in the Banqueting Hall 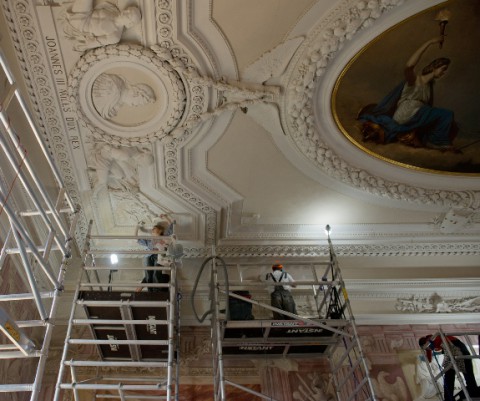 Conservation works in the Banqueting Hall, photo by W. Holnicki

The conservation and restoration work covered the interior of the Banqueting Hall on the top floor of the main body of the Palace, and both its staircases. The interior decor includes various decorations. The ceiling and coving are ornamented with 19th-century stuccowork. In the centre there is a plafond (an oil painting on canvas) with a representation of Aurora by Aleksander Kokular dating back to 1832. All walls have wall paintings with figural representations complementing the illusionistic architecture, ornamented with statues and bas-reliefs, painted as frescos in the early 18th century. Similar wall paintings decorate both staircases.

The works covered the whole room, except for the plafond, which was subject to conservation in 2004-2005. The conservation work started with preparing the photographic and descriptive documentation of the monument. In many places, conservators made stratigraphic uncoverings. Samples of paint layers and undercoats were taken for examination. Archival conservation and photographic documentation was also consulted.

A committee of Wilanów's experts and professional conservators took the decision to remove some parts of the infills and reconstructions due to their pictorial or compositional incorrectness. 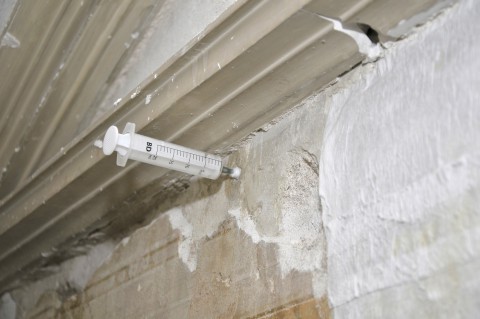 Dirt was removed from paintings. As a result of these interventions, the paintings became visibly brighter and their colours more vibrant. Having cleaned the paintings of surface dirt, faulty retouches and reconstructions were removed. Delaminated plaster and wall cracks were glued with special injections. Inappropriate plaster infills were removed. Damaged parts of the undercoat were waterproofed. All undercoat defects were repaired and dyed engobes were applied to prepare the ground for retouching and reconstruction work on the paint coat. A similar range of works was carried out on the paintings on the staircases. Subsequent works focused on filling in the paint cover in the Banqueting Hall and its staircases. 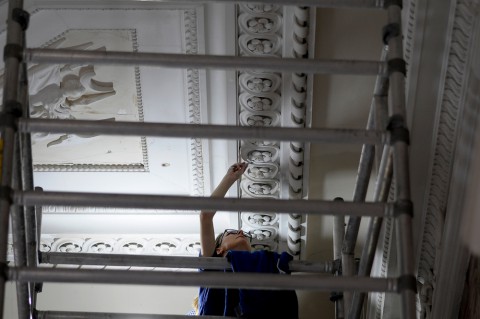 Cleaning of the 18th-century stucco surfaces, photo by J. Andrzejewski

Secondary paint accumulation on virtually all decorated surfaces was removed from the ceiling in the Banqueting Hall, with any damaged details fixed and cracks glued. Secondary accumulation and faulty infills were also removed from the 18th-century stuccowork on the staircases, and the stucco surface was cleaned. Having cleaned the decorations on the landing in the northern staircase, it was established that it had been reconstructed, probably in the 19th century, on the basis of the structure preserved on the southern side. After the secondary accumulation of paint was removed from the ceiling in the Banqueting Hall and the contact surface was cleaned, defects were repaired and the damaged parts of the decoration were restored. Plaster casts were prepared for the missing floral themes in the interlace patterns. Structural reinforcements were made in the deteriorated parts of the ceiling and coving. Following the filling-in of decoration defects in the stuccowork on the staircases, the team proceeded to restore its original colour. 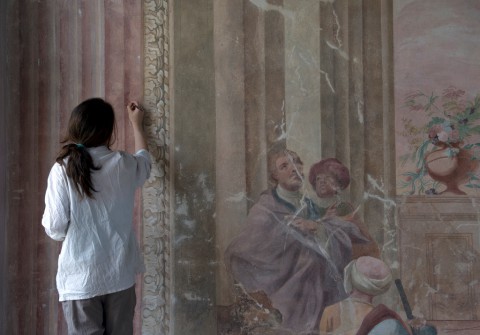 Refilling of the wall-painting decoration, photo by W. Holnicki

After that, the wall-painting decoration was renovated by carrying out two types of conservation work. Small defects were filled by retouching with the use of graphic devices. However, the staircases, and, to a limited degree, the Banqueting Hall, where previous conservation had led to the loss of the painting’s artistic effects, some of the painting required restoration. The added layers are slightly paler than the original painting, thanks to which it is possible to identify the restored and original parts. All the actions taken have made it possible to achieve a uniform effect, which previously was less visible due to the partial conservation.

The original decoration of the Banqueting Hall, over 50% preserved, constitutes a unique example of Polish 18th-Century secular fresco decorations, so restoring its grandeur was an event of major importance.

The conservation and restoration works in the Banqueting Hall and its adjoining staircases were conducted as a part of the “The revitalisation and digitalisation of Wilanów, the only Baroque royal residence in Poland” project. The Project had secured support from the European Regional Development Fund under the Infrastructure and Environment 2007-2013 Operational Programme, Priority XI “Culture and Cultural Heritage”, Activity 11.1. Protecting and maintaining cultural heritage of over-regional importance. In accordance with the adopted Project Implementation Scheme, the investment was completed by 30 September 2015. The total value of the Project: PLN 18 854 348,06. The amount of additional financing: PLN 14 912 881,37 (European Regional Development Fund: PLN 12 675 949,15, and State Budget: PLN 2 236 932,22). For more information on the Infrastructure and Environment Operational Programme please visit www.pois.gov.pl. For more information about the project please click on this link.

The Sarmatian host and an ideal banquet

Much has been written about the feasts of the gentry: descriptions of exorbitant and magnificent banquets convey images of ventures …

Jaworów, a little town situated 48 kilometres north-west of Lviv, counted among the favourite residencies of Jan III Sobieski. It …

Conservation and restoration works in the Three Windows Cabinet

The Three Windows Cabinet is a small room, located on the first floor of the main body of the Palace. …

Conservation and restoration works in the Quiet Room

The Quiet Room is a room in the Wilanów Palace located directly above the King's Bedroom. The walls and vault …