Construction in Poland in the Renaissance

Construction in Poland in the Renaissance Bolesław Orłowski 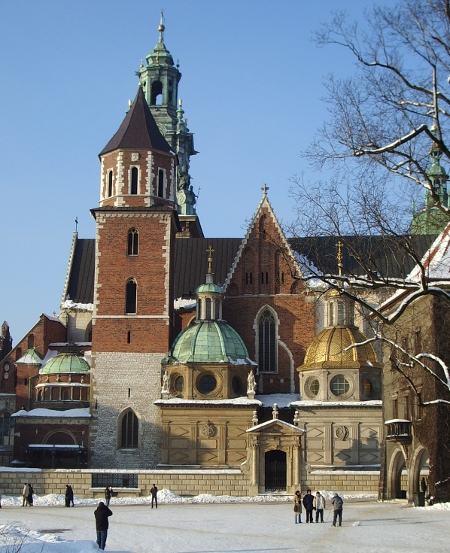 Having caught up with direct heirs of the Roman civilization in the time of the Piast dynasty, the Jagiellon Poland – strictly connected with the Great Duchy of Lithuania – became the largest state of contemporary Europe, exerting considerable influence on international policy. It was the time of epoch-making expansion of Poland which at the end of the 16th century led to the highest level of culture and civilization in our history vis-à-vis the rest of the world. When Gdańsk Pomerania and Warmia were reclaimed, Livonia and Polotsk incorporated and Ducal Prussia, Courland and Moldova periodically subjugated, at the peak of its political and economic power the Commonwealth spanned the territory of one million square kilometres and exercised power reaching far beyond its borders. In 1582 the territory of Poland equalled 815 thousand square kilometres and its population exceeded 7 million.

Within its borders the Commonwealth enjoyed fair prosperity. In the majority of the country there was a lasting peace stemming not only from the country’s external power, but also – or perhaps above all – from the widely spread tolerance exercised in internal relations, so contrasting with violent religious conflicts ongoing in many Western European states. This fact was of great importance in the light of Poland’s particular national and religious diversity. The Poles constituted only 40% of the contemporary population, with the other minorities being the Ruthenians (20%), the Lithuanians (10%), the Germans (10%), and also the Jews, the Armenians, the Latvians, the Flemish people, the Italians, the French, and the Dutch. In a nutshell, it was a huge melting pot which favoured the cultural and civilization exchange, the creation of new ideas and the shaping of a an outstanding character.

Such situation only in theory created favourable conditions for development of cities and municipal industry and craft. In reality the noble class perceived the phenomenon of urbanisation as a threat to their monopolized economic power and consequently from 1400–1450 it voted in favour of acts deterring the urban development. The nobility’s attacks were aimed in particular at guild organisations which were even officially abolished, for the first time by means of the 1423 Statute of Warta. Guilds survived despite all these sanctions and in 1550–1600 they reached an unprecedented popularity.

The Golden Age witnessed an intensified growth of building and construction activities. More and more stone buildings were raised in cities, while edifices designed for general public use were practically all made of bricks or stones. In the course of the 15th century the Gothic architecture reached the River Bug, with its key building material, i.e. the brick, spreading even further to the east beyond the state borders. In 1450–1500 municipal walls were equipped with towers protruded from the wall line and also with polygonal or round barbicans featuring arrow slits (the Cracow barbican was raised in 1498–1499). Stone was used as the building material on a large scale, while postglacial erratic boulders were commonly applied in the north of the Commonwealth.

The beginning of the 16th century saw the appearance of sandstone quarries in the area of Myślenice and Dobczyce, and at the end of the same century the new sandstone-providing locations were Szydłowiec and Kunów. It was used among others in the production of sandstone flooring. Limestone was also extracted on a large scale in the region of Cracow and Kielce. Referred to as the so-called home marble, black marble was obtained from Dębnik and multicoloured marble from the area of Chęciny. Limestone quarries in Pińczów and Trzonów were also of high importance.

In 1450–1500 the art of construction in Poland is more and more influenced by new, Renaissance trends in architecture imported directly from Italy, in particular noticeable in the south of Poland (the north remained under the influence of the Netherlands). This discrepancy resulted in an ever further differentiation of municipal architecture in contemporary Poland.

The Royal Wawel Castle constitutes a separate chapter in the Polish architecture of the Renaissance. The castle was raised on the initiative of Sigismund I the Old, following the 1499 fire which consumed the previous Gothic castle. The initiative was undertaken by the young Prince Sigismund when in 1502 he invited Francesco de la Lore, an architect from Florence, referred to in Poland as Francis the Italian. The architect was commissioned to construct a residence that would be worthy of monarchs of the most powerful state in Europe.

The construction works on the Renaissance Wawel Castle lasted over twenty-five years. Employed on the project were Italian builders and stonemasons. The local population from the area of Cracow and Silesia provided the workforce, alongside Tatar prisoners of war. In 1517 Bartolomeo Berecci took charge of the construction, followed in 1524–1529 by Benedykt of Sandomierz. This large-scale and long-lasting construction project became a driving force of various local crafts. Known to this day are names of some of the manufacturers employed on the castle construction, including Stanisław and Grzegorz Kapłaniec who supplied the multicoloured roof tiles.

The current building techniques were different when compared with those practiced in the Middle Ages. Modern, frequently quite artistic scaffolding was used, team work of bricklayers was facilitated by the widespread application of building machines incorporating systems of pulleys, levers, wedges, toothed gear transmission systems powered by reels, capstans, and sometimes even treadwheels. Used in most cases were lifts for vertical transportation of building material. Systems of pulleys and windlasses were used for instance in 1521 in order to pull the Sigismund bell up the Wawel Cathedral tower. It is also worth mentioning that the first attempt to standardize the brick measurement applicable as the Polish building norm was made by Sigismund Augustus who determined the brick size as 3 x 6 x 12 inches.

Numerous 16th century Renaissance buildings are considered to this day true masterpieces of architecture, as exemplified by the town halls in Poznań, Sandomierz and Tarnów as well as tenement houses in Cracow, Gdańsk, Jarosław and Kazimierz. Many cities expanded beyond the former medieval walls, with some cities raising more modern ramparts of bastion type and others giving up the outskirts fortifications. The process of converting municipal layouts was frequently accompanied by the reconstruction of individual buildings whose Gothic austerity was now being transformed by bright Renaissance facades. The said process reached its peak in as late as the 1650s. Meanwhile, at the end of the 16th century entire new city layouts were created, strictly in line with the newly-defined Renaissance principles. The best example is the city of Zamość founded by chancellor Jan Zamoyski, a true pearl of the Polish Renaissance. Zamość was designed with a careful observance of the new artistic principles and surrounded by bastion fortifications in 1581–1586. The author of the city layout was Bernardo Morando, a gifted architect from Padua. Important Renaissance aristocratic residences were also constructed in Nieśwież (1583–1587) and Książ Wielki (1585–1595). The new architecture clearly influenced also the contemporarily raised manor houses (e.g. applied were interiors forming an enfilade after the Italian pattern) and above all the churches.

The 16th century initiated the practice of glazing windows. Used to this end there were small (between 10 and 20 centimetres in size) rectangular glass planes framed in lead. The glazing constituted but one manifestation of the growing application of glass. Active in Poland from the mid-15th century there were a number of glassworks which reached the total number of 45 at the end of the 16th century. They manufactured poor quality potassic glass for windowpanes and simple vessels.

The Renaissance differed from the Middle Ages among others by body care relative to personal hygiene. This tendency was best reflected in the establishment of water supply systems. There were some 50 Polish cities equipped with such system in the Golden Age. They were chiefly located in the south where thanks to natural terrain conditions the supply of water from sources was facilitated by the force of gravity. In locations deprived of such conditions it was necessary to install water-raising devices. Some of them resembled water lifts applied in the contemporary mining sector. A sophisticated device called paternoster could raise water more than 20 metres high and was powered by a water wheel. It was later erroneously attributed to Nicolaus Copernicus as it was in fact constructed in Frombork in 1571–1572 by Walenty Hendell, a Wrocław plumber. The water propulsion was also applied in the Warsaw waterworks but after the constructor of this rather elaborate installation died, water was raised with the use of a man-powered treadmill, operated among others by Tatar prisoners of war. In Poznań the application used for water-raising purposes was a worm drive, known already in the Middle Ages and described by Vitruvius, which regained popularity in the Renaissance. In Cracow the so-called pump rurmus was used already in 1500–1550. Still widely applied were wooden pipes, joined sometimes by iron or lead connecting and bending elements. The unique Polish cities to install copper and lead water pipes were Lviv and Drohobych.

Further developed was the sewage system existent in some cities since the 14th century. However, the attained results were usually rather poor. As a rule, cities were still dirty and filled with stench of all sorts of rotting waste. Sewage polluted local rivers which often provided water for the water supply system. Road surface was still far from ideal despite efforts made by some municipal authorities which ordered owners to pave the street in front of their houses or collected special paving tax from passing carriages.

One of the most remarkable accomplishments of the Polish Renaissance engineering was the first permanent bridge across the River Vistula in Warsaw, constructed on the initiative of Sigismund Augustus in 1568–1573 by Erasmus Giotto [Erasmus of Zakroczym].