Cult of Ancestors in the Ancient Rome and in the Commonwealth 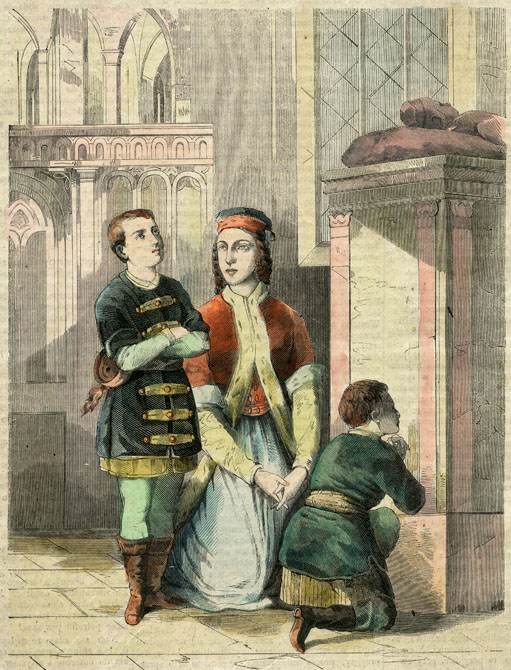 Teofila Sobieska with Sons at the Memorial of Stanisław Żółkiewski, drawing based on a 19th-century painting

Undoubtedly many Roman boys wished to follow in the footsteps of the valiant Horatius. In the war between the Romans and the Sabines he fought a decisive duel and defeated three enemies, thus proving his bravery and great prudence. Many were the Romans striving to exceed King Numa in piety, consul Brutus in probity, Horatius Cocles in bravery and Mutio Scevola in determination. Horatius Cocles managed to defended single-handedly the Pons Sublicius bridge over the Tiber leading to Rome, lost an eye in the fight but saved many a citizen or perhaps even the entire city. Mutio Scevola in turn decided to kill the Etruscan king and to this end he sneaked into the enemy’s camp. Caught in the king’s vicinity, he put his right hand into the fire to show his endless determination. A role model of honesty was Cincinnatus, a citizen and a farmer who was conferred the role of a dictator during a war against the brave Aequi people. Well-known for his honesty and strong character, he consented to abandon his everyday work at the farm, left for the battlefield, returned soon after and eventually passed the power conferred to him onto the senate and the people of Rome. Likewise, girls listened to similar legends: of Hersilia, the beautiful and courageous wife of Romulus; of Cloelia, who was taken hostage by the Etruscan army and managed to escape from their camp and to liberate other hostages; of Lucretia, who went down in tradition as a symbol of love for female virtue exceeding love for her own life; and last but not least on Cornelia, the noble and proud mother of the Gracchi.

The Poles and the Romans displayed a similar attitude towards their respective ancestors. Many Polish homes recalled fame and courage of ancestors as virtues worthy of following. After all, the Sarmatian mentality was based on morals adhered to by past generations, for instance their inclination to peace and freedom, both individual and personal. Writings of the Roman historian Livy abounded in examples of bravery imitated in real life and the unsettled time provided many opportunities to prove one’s courage. Jan III recalled the numerous memorabilia of Stanisław Żółkiewski stored in the family property in Zhovkva. The hetman’s former chamber housed a continually burning oil lamp, his sword and the baton presented to him by the Pope as well as his overcoat slashed by the Turks and stained with the commander’s blood. Children were taught to repeat after Horace, O quam dulce et decorum est pro patria mori – Oh, how sweet and honourable ‘tis to die for one’s homeland. The very same inscription was engraved on the vault of the ancestors’ memorial inside SS Mary’s, Lawrence’s and Stanislaus’s Church in Zhovkva. The inscription engraved on Stanisław Żółkiewski’s memorial in the presbytery of the said church was also more than telling, Exoriaris aliquis nostris ex ossibus ultor – Some day you shall rise from our bones, the avenger.

Polish armorials help to assess the impact exerted by the Roman antiquity on the Sarmatian ideology. An interesting example is found in the origins of the Łada coat of arms. Its establishment relates to war achievements of a warrior named Grzymała. He is believed to have defended a stronghold against Marcus Aurelius so persistently that the Roman emperor was troubled to death. What matters in this armorial myth is not so much the historical truth as the apparent connection between the Grzymała family and the Roman history. Echoes of legends relative to a Roman descent of various Poles can be traced in family and heraldic stories of many noble and aristocratic families.

It was not solely the nobility that made reference to Polish national traditions. In plebeian literature we come across examples of true pride of ancestors’ achievements and a sense of unity with past heroes, though they represented noble or even monarchic lineage. This attachment to the value of Polish national traditions was mainly visible in representatives of the bourgeoisie living in the Crown and also to some extent in the rural patriciate living in Ruthenia and Prussia. However, it is difficult to asses national consciousness of the peasantry.

The Romans too practiced the cult of their ancestors. The atrium of a Roman home contained masks of forefathers. They were cast not so much due to the contemporaries’ belief in the afterlife or their intention to assure a life after death for the departed, but rather for the sake of commemorating outstanding family members and to secure the family’s continuity. Portraits of ancestors were an indication of a long bloodline, an excellent background and family merits. A family splendour (gloria maiorum in Latin) was extremely helpful in having a successful political career. Portraits commemorated not only specific people but also their deeds. For this reason they strove to emphasize the two most significant virtues of a true Roman, namely pietas (piety) and virtus (bravery). Initially portraits took form of wax heads or painted plaques, but as they tended to get damaged with time, the effigies required to be mended or created anew. Specialized workshops accepted also commissions for masks of fictitious ancestors, i.e. these featured in family legends or those killed in action. Images of ancestors were hung on atrium walls and connected with ribbons to depict genealogical trees.

Naturally, a display of ancestor’s portraits fails to prove that their great deeds were truly remembered and followed by posterity. Let us recall Marcus Brutus, one of the murderers of  Julius Caesar. Brutus joined the plot while bearing in mind his famous ancestor, Lucius Junius Brutus, the first Roman consul after Tarquinius Superbus was expelled in 510 BC. Brutus was later referred to as the one who chased away the kings. Found at the foot of his monument there were inscriptions which said, May you live now. In his seat in the senate curia Marcus Brutus used to find anonyms reproaching his inactivity and recalling the courage of his ancestor. At the beginning of his political career the Caesar himself used the event of his aunt’s and his daughter’s death (both Julias, as it was customary in Roman families to give to daughters names derived from family names) to refer to the origins of Gens Julia. Caesar could not boast of ancestors’ highest dignities, as indeed they were rather scarce. Nonetheless, representatives of Gens Julia vaunted their family genesis stemming from goddess Venus, her son Aeneas, the progenitor of the Romans, and his son Romulus, the founder of the city. When making famous funeral speeches at the forum, Caesar was making the Romans remember their own descent.

One may risk a statement that the Polish and the Roman states alike were based on ancient morals and virtuous statesmen. Both the Romans and the Poles were convinced that mores maiorum – mores of the ancestors – constituted a veritable root of a healthy state and a source of the ancestors’ strong morals. However, should we omit their unquestionably didactic nature, the said legends are but a sign of ennobling the present by recalling the past.