Death in the Eternal City 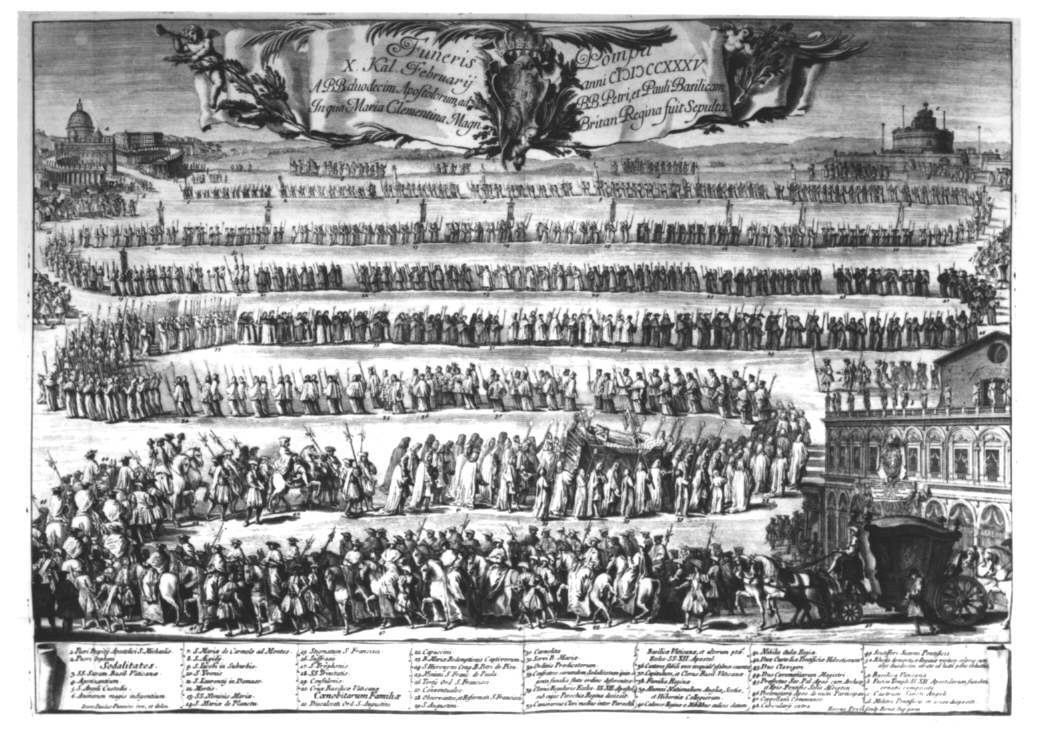 “Funeral of Maria Klementyna Sobieska”, print from the collection of National Library in Warsaw

Szymon Starowolski was the first author to write about Polish commemorative inscriptions found in Roman churches. They were published in the 1655 Monumenta sarmatarum, a thorough inventory of deceased benefactors. The oldest inscriptions referred mainly to clergy and dated back to the 15th and 16th centuries. The finest of the time is a memorial to Cardinal Stanisław Hozjusz in the Basilica of Santa Maria in Trastevere. Many of the deceased were young people who came to Rome in search of education and experience. Instead, they found eternal rest. One of them was Michał Korniakt, a representative of a powerful Lvivian bourgeois family ennobled in 1571. In the Church of Santa Maria in Aracoeli located in the Capitol there is a memorial to Korniakt made of multicoloured marble and alabaster created in circa 1594. Similar to Saint Stanisław Kostka and so many other fatalities, Korniakt died of malaria, a terrible plague of contemporary Rome. In the jubilee year 1600 malaria epidemic claimed the lives of Cardinal Jerzy Radziwiłł and the Bishop of Wrocław Hieronim Rozrażewski (both buried in the Church of Il Gesu). In the following year fatal victims of malaria included Stanisław Reszka, administrator of Saint Stanisław Church in Rome and the Polish ambassador to the Vatican City and the Kingdom of Naples. In 1610 malaria killed Bartłomiej Powsiński, a canon and founder of a chapel at the Church of Santa Maria degli Angeli. The 17th century saw a growing number of Polish-language commemorative plaques and inscriptions appearing above all in Saint Stanisław Church in Rome, which soon became our informal national necropolis in the vicinity of the Holy See. Preserved among the plaques  there is one dedicated to Uniate Bishop Rafał Korsak. Buried in the Church of Stimmate di San Francesco was the illegitimate son of Władysław IV, Władysław Konstanty Vasa da Wasanhof, a commander of the personal guard to the Queen of Sweden Christina and a high rank member of the Archbrotherhood of Saint Francis’ Stigmata.

In a way, a distinct group of memorials refer to the Victory of Vienna. The sacristy of the Trinitarian Church of San Carlo alle Quattro Fontane contains a beautiful multicoloured commemorative plaque dedicated to Bishop Jan Kazimierz Denhoff. It was on king’s behalf that Denhoff visited Pope Innocent XI and handed him the Muhammad banner captured in the Battle of Vienna. The Capuchin Church is the burial place of the victorious king’s son Aleksander Sobieski. Having left Poland, he spent the rest of his life in Rome. The Vatican Basilica in turn contains a memorial to Jakub Sobieski’s daughter Maria Klementyna. With the Papal benediction she married James III Stuart, referred to as the Old Pretender to the Scottish throne. Similar to those of her husband and two sons, Sobieska’s memorial was created by Antonio Canova. A veritable genealogical polonicum is a memorial to Queen Marie Casimire d’Arquien’s father preserved to this day in the Church of  San Luigi dei Francesi.

Truly impressive memorials dedicated to Saint Stanisław Kostka (died in Rome in 1568) can be found in the Jesuit Church and the former monastery located on the Quirinal Hill. As a result of efforts made by Polish dignitaries, Pope Paul V granted permission for official veneration in 1605 and Pope Benedict XIII canonized Kostka in 1726, naming him – along Aloysius Gonzaga – the patron saint of youth. Saint Stanisław was commemorated with a decorative reliquary coffin placed in the chapel and an unusual decoration of his former monastic cell. It is only a reconstruction today, as the wing of the monastery building where the Saint passed away was demolished in 1887. The key element of the decoration is a memorial shaped like a low bed with the saint’s figure resting on it. The memorial was executed in multicoloured marble in 1702–1703 by Pierre Le Gros the Younger who was employed by the Society of Jesus.

In the 19th and 20th centuries created were many more epitaphs for deceased members of the Polish community in Rome. Among them, there were epitaphs to blessed Maria Urszula Ledóchowska, blessed Joanna Gabriel and blessed Franciszka Siedliska. The time of the World War II brought about the creation of numerous commemorative plaques placed in  various churches. They were dedicated among others to general W. Anders, Archbishop J. F. Gawlina and Cardinal A. Sapieha. Also commemorated were Polish soldiers killed in battle and murdered in the Soviet Russia.