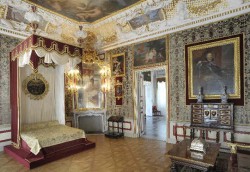 On the 1st of May 2004 Poland became a fully-fledged member of the European Union. Since that moment Polish cultural institutions can freely benefit from the possibilities of  applying for support of  the execution of the projects prepared by them with so-called “European funds”.

The Museum Palace in Wilanow, the only Baroque summer royal residence in Poland and at the same time one of the most beautiful and one of the best known Polish palaces, from the very beginning successfully acquires and utilizes subsidies, whereby the museum can protect and make available in a better way invaluable monuments amassed in the Palace during several hundred years of its existence. During the years 2005 – 2007, the Museum executed  very expensive conservation and restoration works within the project “Restoration of interiors of  Poland's first museum of art -  the Museum Palace in Wilanow " with the financial support of the European Regional Development Fund, within the frame work of the Integrated Regional Development Operation Program (Priority I, Undertaking 1 Development of tourism and culture). The subsidy amount equals to EUR 1,057,272. (72,50% of the eligible costs).

This project was the first stage in the planned sequence of undertakings aimed at full revitalization of the palace and garden complex in Wilanow, within the scope of implementation of the internal strategy to re-introduce baroque in the Museum, elaborated for the years 2004 – 2013.

The works concerning execution of the project consisted in renovation and restoration of royal chambers located in the oldest part of the Palace in Wilanow, i.e. Queen’s Bedroom, Queen’s Anti-camera and Mirror Study, and also 19th century premises located in the right wing of the Place – Chinese Rooms and Hunting Rooms. Restoration included among other things the paintings, wallpapers, decorative architectonic elements, fabrics and wall paintings as well as wainscoting and other wooden elements.

Since 30th April 2007, Polish and foreign public can admire the results of work of conservators, who restored former brilliance to the richly decorated royal chambers of Wilanow residence. In the restored at present Chinese and Hunting Rooms, closed for tourists until recently, an exhibition is organized presenting unique collection of works of craft: porcelain from Meissen and Chinese porcelain, empire biscuits, artistic craft, furniture and paintings on paper from Europe and Eastern Asia.

As a testimonial of the Polish Minister of Culture and National Heritage the project received an award Grand Prix SYBILLA 2007 for Museum Event of the Year.

Execution of the project from the funds of the European Regional Development Fund is the first significant step towards the development and protection of the cultural heritage potential of the Museum Palace in Wilanow. Execution of the project contributed to reinforcement of prestige of the Museum Palace in Wilanow, through making available to the different groups of customers a final product of very high quality, in the form of a modern tourist, educational and historical offer.