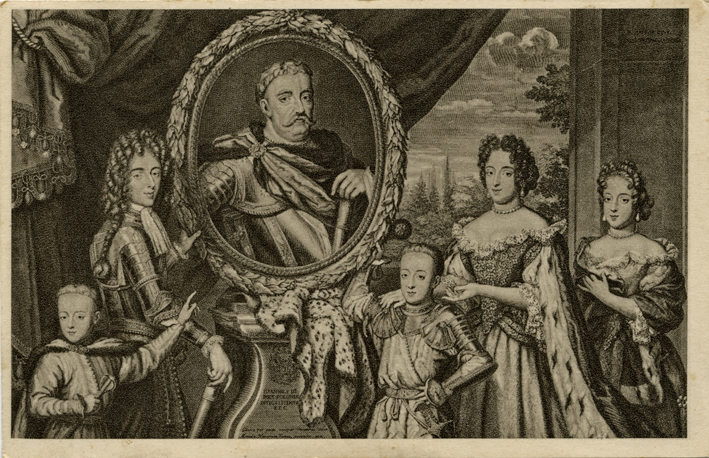 Benoît Farjat, based on a painting by Henri Gascar (Gascard): Family portrait of King Jan III Sobieski, picture from the collection of the National Library in Warsaw.

The State Collection of Art in Wawel (Cracow) contains an oil painting originating from the Broel collection of plated cutlery in Vilnius. Representing a group portrait of the Sobieski family, it was made probably in Rome by Henri Gascar (Gascard, 1634 or 1635–1701), a Parisian painter and mezzotint artist settled in Rome from 1659. The image of formal character was made in 1691, probably not in Poland. It is assumed that the artist made use of images representing the Sobieski family members owned, presumably, by Cardinal Forbin de Janson, French ambassador to Warsaw, who maintained friendly relations with the court. Therefore, it does not seem accidental that its faithful graphic copy of high artistic quality created in 1693 in Rome by engraver Benoît Farjat (1646–1720), active in the Eternal City, was dedicated by Gascar to Forbin.

Although the two images were executed already in Jan Sobieski’s lifetime, he partakes in the solemn scene only in effigie, visible in the portrait as a king-knight surrounded by his closest relatives. The frame of Sobieski’s image is supported by the two eldest Princes, Jakub Ludwik and Aleksander Benedykt. The youngest Prince Konstanty Władysław is standing in the left bottom corner of the composition, while Marie Casimire accompanied by Princess Teresa Kunegunda occupy the right side. The far background reveals a park landscape, partly covered by drapes and architecture. By portraying six people based probably only on available iconographic sources, i.e. not from nature, Gascar carried out his task quite well. The image gained popularity as apart from the masterly graphic copy, painted also was its reduced replica discovered by Aleksander Lesser in the Munich castle gallery and originating probably from Teresa Kunegunda’s dowry. The discussed work was one of Gascar’s last productions and regretfully little is known of  this period of the artist’s life. Farjat’s print was copied in Poland by master wood engravers active in Warsaw: Henryk Kübler, based on a drawing by Józef Tadeusz Polkowski (1859–1863), and Julian Schübeler (1883).

The discussed is a rare case, especially in Poland, of an original painted prototype which served as the ground for a seventeenth-century print. Comparison of the two pieces leads one to conclude that in the course of conservation carried out in 1854 Gascar’s painting was cut shorter at the bottom at from both sides.