Fashion for Chinoiserie at Wilanów Palace 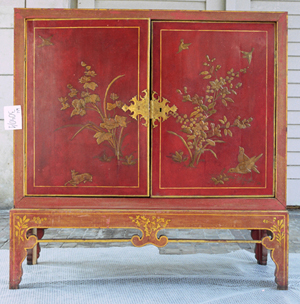 Cupboard by Martin Schnell (before preservation)

From the end of the seventeenth century Europe witnessed a growing fashion for Chinoiserie. Traces of this mode are to be found also in the decorations of Wilanów Palace. The King’s Chinese Room was created during the reign of Jan III: it featured exotic Far Eastern exhibits from the royal collection, which played the role of curiosities. We can recreate the appearance of the Room only from a description in an inventory from 1696.

During the first half of the eighteenth century an important artistic centre with an extremely ardent fashion for Chinoiserie was the court of Augustus II. The collection of Chinese and Japanese porcelain amassed by the king provided patterns for the manufactory in Meissen. Another workshop working for Augustus II was that of Martin Schnell, who produced objects from European lacquer. The Chinese Room, set up during the reign of Augustus II and preserved in Wilanów Palace, is the work of precisely such a workshop. Its walls are adorned with aventurine lacquer-work panels, whose technology and motifs resemble Chinese lacquer.

At the beginning of the nineteenth century Stanisław Kostka Potocki created in Wilanów Palace a Chinese Apartment intended for displaying  art collections from the Far East. The rooms were part of a museum established in Wilanów in 1805 and the walls were embellished with Far Eastern woodcuts or pseudo-Chinese paintings. The featured collections were composed of Chinese and Japanese porcelain, lacquer artefacts,   carved stone, ivory and roots, as well as other exotic curios. The Stanisław Kostka Potocki collection constitutes an important part of the Oriental art section at Wilanów Museum.

The palace gardens also reflect a discernible impact of the fashion for Chinoiserie. A nineteenth-century English-Chinese garden laid out in Wilanów at the time of Stanisław Kostka Potocki was enhanced with a Chinese gazebo, standing there up to his day.

The illustration presents a cabinet with doors made by Martin Schnell  (state prior to conservation). Originally, the doors were part of a septet – a piece of furniture from the collection of Augustus the Strong. The base is of later origin. The authors tried to match the colour of the casing and the valuable doors. The exhibit is on show at the Museum Palace in Wilanów.