Former bedchamber of Jan III Sobieski in the Podhorce Castle 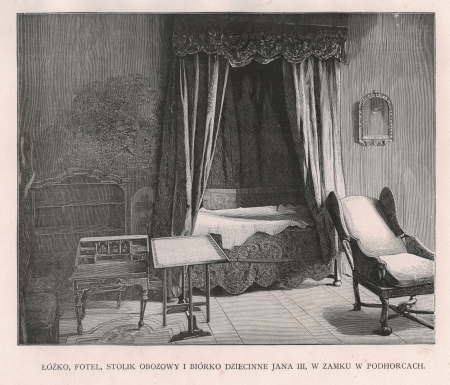 An anonymous engraver: Former bedchamber of Jan III Sobieski in the Podhorce castle, picture from the collection of the National Library in Warsaw.

The Podhorce [Pidhirtsi] castle was raised in 1635–1640 at the expense of Hetman Stanisław Koniecpolski and in 1682 offered by Aleksander Koniecpolski to Prince Jakub Ludwik Sobieski. It remained the royal family’s property until 1720, when the younger Prince Konstanty Władysław Sobieski gave Podhorce and Olesko up to Stanisław Mateusz Rzewuski, Crown Field Hetman. His son Wacław (1706–1779), who towards the end of his life fulfilled the function of the Castellan of Cracow, safeguarded with loving care all objects relative to the previous castle owners. Moreover, in 1754–1767 he amassed new artefacts scattered all over Poland and brought them all to Podhorce. Consequently, the castle prided itself on having an exceptionally large collection of Sobieskis’ memorabilia, including Jan III’s sabre used in the Battle of Vienna, rich spoils of the battle (inter alia drums and cymbals of janissary music, Turkish bows incrusted with gold), furnishings in the Crimson Room – all from Jan III, and also mementoes of Marie Casimire (a cedar wood case, a shoe and a spinet offered to her after the Victory of Vienna by Empress Eleonor Magdalene, wife of Leopold I Habsburg). The exhibits included also a marble table broken in half, which – as the legend had it – the future King of Poland was said to be baptised in Olesko.

A small square room in the Podhorce castle, the so-called Mosaic Study, also featured the allegedly authentic former bedchamber of Jan III, situated in the north-east corner of the building and accessible only from the Mirror Chamber. One of its walls was decorated with a Turkish satin hand-embroidered hanging captured in the Battle of Vienna. The room was home to a large number of Sobieski’s memorabilia, including an impressive four-poster bed and a more modest camp bed, a writing desk, an armchair and a children’s desk from Żółkiew. Presumably due to the planned 1883 edition of Józef Łoski’s prestigious album entitled Jan Sobieski, jego rodzina, towarzysze broni i współczesne zabytki [Jan Sobieski, his family, comrades-in-arms, and contemporary monuments] illustrated with woodcuts, Edward Trzemeski took photographs of, among others, a fragment of the Mosaic Study interior, thus recording the arrangement and condition of the above-mentioned objects. The photograph served as a model for the discussed woodcut. It remains unclear who copied it in drawing and cut in the woodblock.

During the consecutive two world wars the royal bed – an impressive piece of furniture of the French baroque type of lit d’apparat – was transported by the Sanguszka family to Gumniska, whence it was intercepted in 1945 by the Museum in Tarnów. Although the bed is traditionally associated with the figure of Jan III, there is no mention of it in the 1717 and the 1729 inventories. It appears for the first time in the book of orders from 1754, but there is no relation made to the king or to his sons. It was as late as in 1859 that “The Castle Inventory in Drawing” increased its rank to a royal mobilium. This romantic mystification was made by Leon Rzewuski (1808–1869) and consolidated by Burgrave Antoni Kryczyński, who in ca. 1880 gave the Mosaic Study the title of Sobieski’s bedchamber. The name was taken for granted by the nineteenth-century monographs and guidebooks, including Łoski’s monumental album.