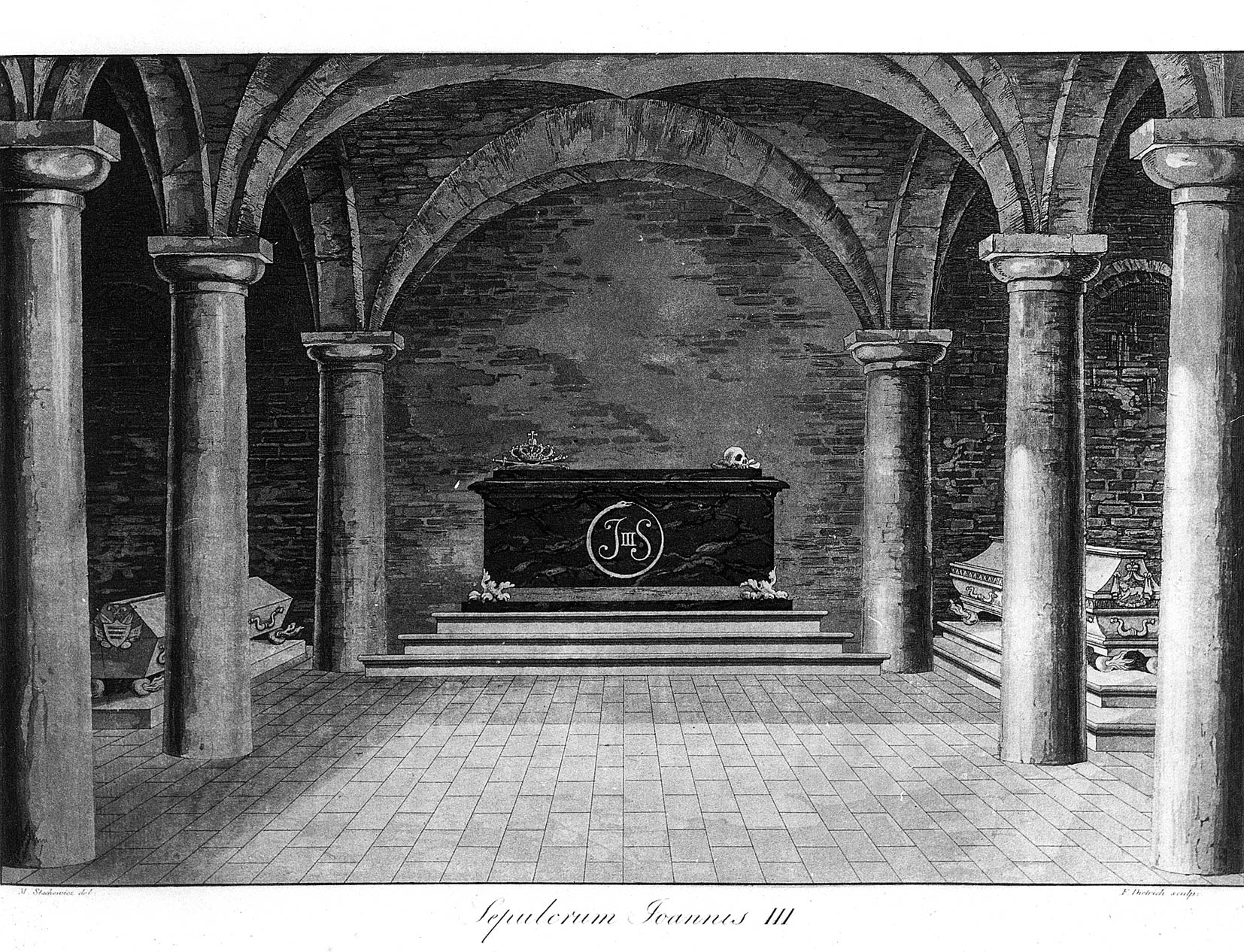 After the victor of the Battle of Vienna passed away, the news of his death quickly reached Cracow. Already on 3 July 1696 the city councillors decided that the funeral ceremony would be held in Saint Mary’s Parish Church. Inside the bedecked presbytery lightened up with burning candles, a grand castrum doloris was raised, whose drawing has been preserved in Clavis Archivi Urbis Cracoviae. Resting on a pedestal flanked with obelisks which depicted the late king’s coats of arms, there was a catafalque with a coffin supported by figures of eagles. The coffin was surrounded by military insignia and crowned with a monumental Janina coat of arms of the Sobieski family. The whole castrum doloris was covered with a paludamentum which featured an angel glorifying Jan III Sobieski.

In line with the one-day ceremonial, the actual funeral was held much later, i.e. on 15 January 1734, one day after a solemn coronation entry to Cracow of Augustus III. Sobieski was buried alongside Augustus II, Queen Marie Casimire and little Jan, the late son of Prince Jakub Ludwik. The bodies of the royal family members were transported to Cracow at the end of August 1733. Saluted with the sound of the death knell tolled by all the city churches, the bodies were solemnly transported to Saint Florian’s Collegiate Church, wherein they were placed on a catafalque and remained until January of the following year.

Two sumptuously decorated wagons drawn by eight horses each transported the bodies from Saint Florian’s Church. The bodies of the Sobieskis rested on one wagon and that of Augustus II on the other. The cortège was headed by suffragan bishops of Cracow, Kujawy and Poznań as well as the Cracow chapter. The crowds gathered to pay their lasts respects to the monarchs were unaware of the fact that they were assisting in the last such funeral ceremony held in the Wawel cathedral; no other royalty has been buried in the cathedral ever since.

In front of Saint Stanislaus Chapel of the Wawel cathedral the royal coffins were placed on a specially raised castrum doloris, its corners emphasized with torch-holding pyramids. The mass was celebrated by Bishop Lipski and the homily delivered by Franciszek Kobielski, Suffragan Bishop of Kujawy. After the exequies were sung, the cortège moved towards the cathedral south door where there was an entrance to the crypts located between the Sigismund’s Chapel and the Vasa Family Chapel. All the coffins were buried in the crypt underneath the Vasa Family Chapel.

In the centenary year of the Victory of Vienna (in 1783) King Stanislaus Augustus ordered a new sarcophagus of black marble to be made for the late King Sobieski. Presumably due to wrongly taken measurements, the new sarcophagus turned out to be too small for the existing coffin. Without due reverence, the royal remains were repositioned into a new, smaller coffin which was then buried in the sarcophagus.

The coffin of the great king was re-opened one more time, on 12 November 1938, in the course of restoration activities inside Saint Leonard’s Crypt and the resulting necessity to shift the sarcophagus to another place. The protocol drawn and photographic documentation made then “in eternal memory” have been preserved in the collection of the Wawel Basilica.