12 September 1683 marked the legendary victory of Vienna, wherein the armed forces commanded by Jan III Sobieski crushed the Ottoman Empire troops. From that day on, the sunshine-reflecting escutcheon of the Sobieski family has been perceived as a shield protecting the entire Christian world against the faithless moonlight. 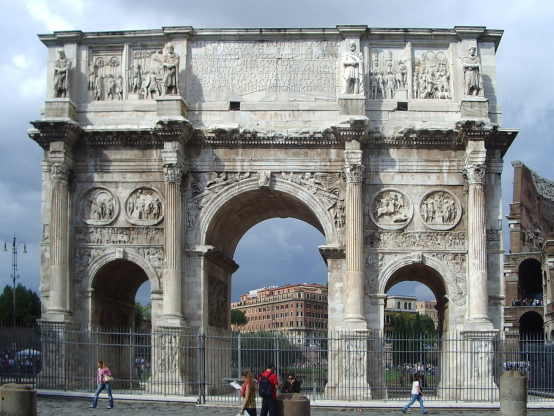 In the time of Jan III Sobieski’s reign one more extraordinary event took place in 1679. In the course of renovation works carried out inside the Holy Cross Chapel in Wawel, discovered was an elaborately decorated shield. Its decoration depicted the victory of Emperor Constantine over Maxentius in the legendary battle fought near the Milvian Bridge in Rome in 312. The shield contained a Latin inscription pertaining to a victory over pagans. Understandingly enough, the discovered shield was handed to King Sobieski, the commander in chief of the allied forces, before he set off on his expedition to Vienna. The inscription was interpreted as a prophecy of a victorious battle against the Vienna-besieging Ottoman forces. The prophetic shield was later stored in the former residence of the Żółkiewski and the Sobieski families in Żółkiew [Zhovkva]. At the beginning of the 19th century it was passed on to the Radziwiłł family who in turn offered the precious memento to Izabela Czartoryska. From then on, the buckler was to add splendour to the collection amassed in the Temple of Sybil in Puławy, considered the most precious exhibit of Duchess Czartoryska’s collection. Today, it belongs to the Czartoryski Museum, part of the National Museum in Cracow.

The battle depicted on the discussed shield was fought in 312, when four different emperors, including Constantine and Maxentius, were striving to assume power in Rome. Constantine, the then ruler of Gaul and Britannia, invaded Italy and was confronted in Rome by a far more powerful army headed by Maxentius. Shortly before the battle, in the vicinity of Milvian Bridge, the future Emperor Constantine the Great had a vision: against the sky he saw a shining cross with the inscription IN HOC SIGNO VINCES, meaning “Thou shall win under this sign”. Immediately afterwards, Constantine ordered all of his soldiers to mark the sign of Christ’s cross on their shields. Constantine managed to defeat the far more powerful enemy forces whose commander Maxentius drowned in the Tiber. Following the victorious battle, Constantine converted to the Christian faith and introduced reforms which set the foundations for Christianity in Europe. Sobieski’s prophetic shield was probably forged by the established centre of weapon manufacturers in Milan and dates back to the 16th century. It was presumably hidden inside the Holy Cross Chapel in Wawel at the time of the Swedish invasion of 1655–1660. Its miraculous discovery was described by the 17th-century writer and poet Jan Gawiński in his work composed in 1680, preserved to this day as a manuscript and entitled Clipaeus Christianitatis, i.e. Shield of Christianity.

1679 Anno Domini, this day of the ninth of September, in the  course of renovation works inside the Holy Cross Chapel of the Cracow castle cathedral in the north (...), while the renowned architect and mason Stanisław Kopernak was constructing higher walls, discovered in rubble above the chapel vault was a round  i r o n  s h i e l d (...) On top of the shield there is an elaborately executed, as if miraculously crafted, depiction of a city with towers and an open gate. At the bottom, a crowned king ahead of victorious forces, holding banners with the sign of the Holy Cross, and trumpeters playing trumpets, all entering the city. Wherein, on the right of the shield there is a crucifix visible among the clouds, and on the left of the said crucifix, there are verses carved in Latin against a gilded, large background.

The Latin epigram carved on the golden plate held by an angel reads as follows:

For the grace of God, should thou crave for fights –
Thou, the Christian kings and the valiant knights! –
Should thou crave for triumphant harbingers and signs ,
Mark your dashing blades with the Cross of Christ .
With that sign our forefathers fought and crush’d their foes,
Achieved glorious victories, injustice opposed:
With Cross on thine banner – win for gracious Lord,
Make his name be exalted in th’entire world!
Genuine are such wars and such battles holy
That suppress the cursed pagans, their shameful folly!
Thou who shall rejoice in thine enemies’ defeat,
Be grateful for the honour of spreading the Creed .

Jan Gawiński goes on to consider possible prophecies for the king and for Poland resulting from the recovery of the shield, referring to the Holy Scriptures as well as to ancient literature. The author attaches a lot of importance to the symbolic meaning of the Sobieskis’ Janina coat of arms:

The highest-ranking Commander of heavenly and earthy forces gives encouragement to kings, princes and renowned leaders fighting for the Christian faith but also to His Royal Highness the King planning to set off on the mission to defeat Turkish troops, the most vicious enemy of the Holy Cross;  he gives an encouragement not so much with an idle prophecy but instead, with the most secure sign of successful action, which is his family escutcheon. 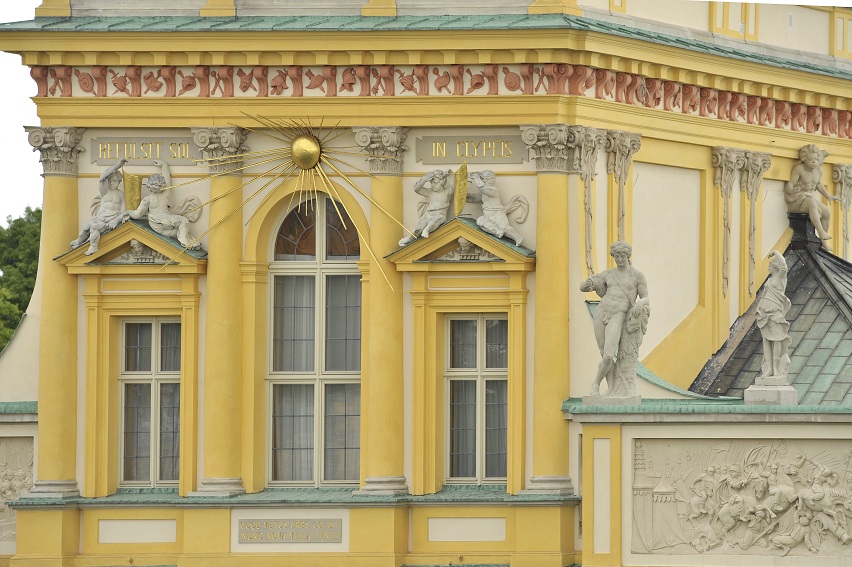 Decorations of the Wilanów Palace elevations seem to testify to the fulfilment of the prophecy inscribed on the Wawel shield. Low reliefs depict the happily reigning monarch who changed the course of history. Images visible in the façade of the main body of the palace illustrate the “genuine wars and holy battles” fought by Jan III Sobieski alongside the later “triumphal signs”. The attics comprise scenes taken from the king’s life, above all his military expeditions. On the left side of the palace there are successive depictions of the following events: Sobieski’s expedition to confront units of armed Tartars, the Battle of Chocim [Khotyn] and his election as the King of Poland. Illustrated on the right there are episodes like: the entry into Cracow for the coronation, the Battle of Vienna and the Battle of Parkany.

Wacław Potocki dedicated an entire poem to the shield-related and later-fulfilled prophecies:

The buckler he owns in the harshest trial
God sent from high Heaven to shield from times dire (…)
The Buckler gives protection from dreadful disaster
To the bewailed Crown; the shield of our Master
Is a votive off’ring to Homeland from its Ruler,
A service to almighty God, a Heraldic Jewel
Not worn on the royal finger but his heart and chest;
A Crown in peace, a shelter in unrest.