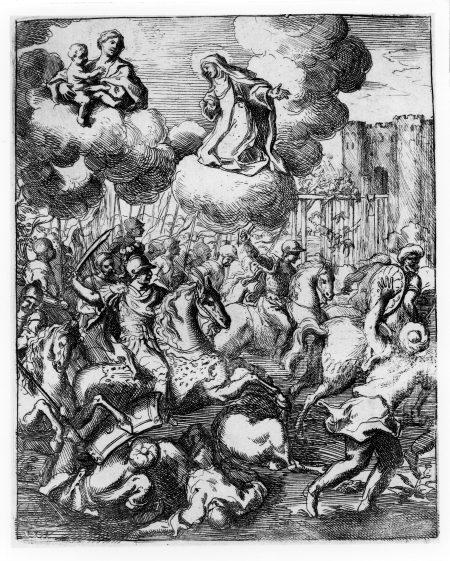 Jerzy Eleuter Szymonowicz-Siemiginowski, based on his own drawing: The Battle of Chocim, from the collection of the National Library in Warsaw.

The Polish forces preparing for battle against the Turks in November 1673 were not only “very well armed and dressed” (quoting after an English resident in Gdańsk) but also, or perhaps above all, commanded by the most illustrious and commonly approved leader Jan Sobieski. As historian Tadeusz Korzon put it, “this Crown Hetman led to fame both young and old soldiers, not disheartened by national dilatoriness, disorder and disobedience. He knew how to unify and gather uncontrolled urges and turn them into collective action by successfully combining soldierly power, disinterestedness, gentleness and understanding displayed by a free citizen of the Commonwealth”. Poet Jan Andrzej Morsztyn justly wrote: “Oh, move further and reclaim / Podolia. Istanbul rein. / May after your valiant war / Cross in turban be extolled”.

Sobieski by no means spared himself during the battle. Quite the contrary, he fought in the front ranks. He went into attack leading his dragoons and when the outcome of the battle seemed uncertain for a while, he rushed into the thick of the fighting. The impressive Victory of Chocim cleared of shame the earlier collapse of Kamieniec Podolski and the Treaty of Buczacz. The sultan’s flag captured with many other spoils was sent to the Pope to Rome, where it was to proclaim the name of Jan Sobieski to the entire Christian world.

In 1691, i.e. still in the lifetime of Jan III, patron of art and architect Fr Sebastian Piskorski published in Cracow his work in Latin and Polish entitled Flores vitae B. Salomeae Virginis with a comprehensive life of the blessed and the history of her worship. Among etched illustrations made by Jerzy Eleuter Szymonowicz-Siemiginowski (ca. 1660–1711), Sobieski’s court painter and printmaker, the last one marked with number 23 was a scene of the Battle of Chocim with the accompanying triumph of Blessed Salomea.

This dynamic composition drawn with free lines is divided into two areas, terrestrial and heavenly. The terrestrial one depicts Jan Sobieski in full gear, with naked sabre, galloping on horseback ahead of the Polish cavalry chasing the Turks. The background features the Dniester River with its bridge and the Chocim castle. The pose of the hetman and his horse resembles closely that in the king’s equestrian portrait painted by the same author (the painting belongs to the collection of the National Museum in Warsaw). In the heavenly area, above the ongoing battle, there is Blessed Salomea kneeling in front of Madonna and Child and praying for victory.

Siemiginowski counts among the few Polish artists from 1650–1700 who made prints after his own prototypes (drawings or paintings). A portfolio of his printed pieces was at a time in Sobieski’s library in Żółkiew, but regretfully it was lost. Although influenced by Italian art, the set of illustrations for Flores vitae B. Salomeae excels local prints of the time in its artistic level. Additionally, it constitutes a long-lasting proof of the artist’s personal contacts with Fr Piskorski, whose function as director fabricae of St Anne’s church in Cracow resulted in a large number of commissions given to Siemiginowski.