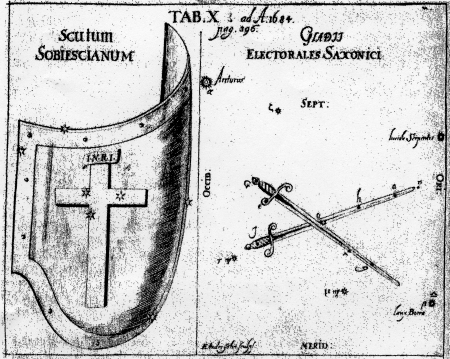 In line with the author’s intention, the book constituted a catalogue of fixed stars comprising 3000 entries, and was the outcome of his observations conducted since 1641. Hevelius managed to catalogue 1888 entries, and in so doing he exceeded the catalogue compiled in 1651 by Riccioli (1468 descriptions of stars). Hevelius’s work was illustrated with copperplate engravings of two star charts and depictions of all constellations, 54 prints in total (the copperplates were prepared already in 1686). Three people co-operated in making the illustrations: Hevelius (auctor, observator ac delineator), the local painter Andrzej Stech, creator of the final artistic version, and the print maker Charles de La Haye, contemporarily active in Gdańsk.

The frontispiece to Firmamentum Sobiescianum included an impressive print (made by Stech and La Haye) representing Hevelius at an old age inside the heavenly palace of Urania. The muse is sitting on a throne among the clouds, surrounded by her children personifying five planets, and eminent philosophers and astronomers (including Tycho Brahe, Hipparchus, Ptolemy and Copernicus). Above them, suspended in the clouds there are numerous angels proclaiming the glory of God. Visible in the foreground there is a scholar bent by old age, carrying two shields (of which one is Scutum Sobiescianum), and seemingly reading an opened volume entitled Catalogus Fixarum. A panorama of Gdańsk is seen in the far background at the bottom of the print.

The discussed book could be published thanks to a special grant awarded to Hevelius by Jan III Sobieski. In the course of his 7-month-long stay in Gdańsk (1677–1678) the king paid frequent visits to the astronomer’s house and observatory, displayed vivid interest in his research and often assisted in his scientific work. Sobieski granted Hevelius a fixed salary and supported the scholar financially, especially following the ill-fated fire of 1679 which consumed all the astronomer’s possessions. Hevelius expressed his gratitude to the royal benefactor and patron in various ways. In 1676 he sent him as gift some lemons grown in his small garden in Gdańsk. In 1686 he paid tribute to the King of Poland by naming a newly discovered constellation Scutum Sobiescianum, i.e. Sobieski’s Shield. The constellation comprised 7 stars (alluding to all 7 members of the current Sobieski family) arranged in the shape of a shield with a cross (relative to Sobieski’s Janina coat of arms). This very shield is held by Hevelius in his right hand in front of Urania’s areopagus.