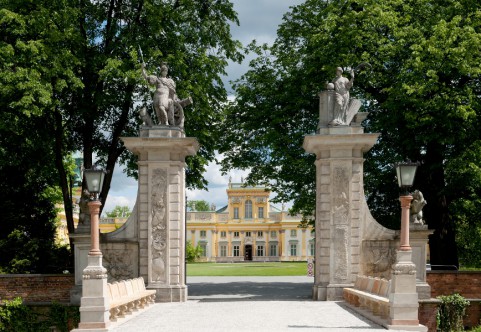 King Jan III acquired the property Milanów in 1677. Over the years that followed, he inspired and carefully oversaw the construction of a Baroque palace, designed by Agostino Vincenzo Locci (also known as Agostino Locci the Younger), at the site. The surrounding areas became the locale for splendid gardens, as well as a grange with farm buildings and a menagerie. The Wilanów residence, located just outside of Warsaw, provided Jan III and his family with a place of rest, while being close enough to the Royal Castle – the official residence of the King, Sejm, and Senate – for the monarch to retain control over the course of events in his country.

During the reign of Jan III, the palace consisted of the main body with garden galleries and towers, with a bipartite courtyard to the front. The side wings were appended to the palace at the behest of a subsequent proprietor of Wilanów, Elżbieta Sieniawska, in 1720-1729, from a design by Giovanni Spazio. Sieniawska decided to maintain the architectural character of the main body of the building, dating back to the times of Jan Sobieski; due to her decision, the entire composition of the palace forms a harmonious whole.

History of the Palace – read more.

During the last quarter of the 18th century, the then-current proprietor of the palace, Izabela Lubomirska, tasked her architect, Simon Gottlieb Zug, with establishing the Guardhouse, Kitchen and Bath around the courtyard. Though Zug’s designs bear out traits of early Neoclassicism, their elegant shapes successfully communicate with the Baroque palace. Lubomirska also ordered a the southern part of the garden to be refurnished according to the Anglo-Chinese style.

Izabela Lubomirska bequeathed the property to her daughter, Aleksandra, and her husband, Stanisław Kostka Potocki. At their behest, a museum open to the public of all social standings was established in the Wilanów palace in 1805. The palace’s art collection, began already by Jan III and expanded by later owners, was supplied with acquisitions made by the Potockis. Members of the public became privy to the Royal Chambers of both King Jan III and Queen Marie Casimire, including remembrances of the Sobieski family, as well as a formidable collection of European, Polish and Oriental art. The collection included paintings of exceptional quality (works by Lucas Cranach, Jan Lievens, Peter Paul Rubens, Pompeo Batoni, Angelika Kaufmann, Anton Graff), antique vases, biscuits, and works of Oriental crafts. Yet, the Equestrian Portrait of Stanisław Kostka Potocki by Jacques-Louis David remains the greatest asset of the Wilanów collection, being the only work by David found in Polish art collections.

Stanisław Kostka Potocki initiated the refurnishing of the part of the garden stretching to the north in accordance with the English style. In 19th century, the garden was enriched with, among others, an Oriental-style Chinese Gazebo, a Roman Bridge connecting the garden to an island on the lake, and a Pump House, whose exterior shape was inspired by Medieval architecture. On the opposite side of the Wilanów Lake, the Morysin park was established. In 19th century, the southern wing of the palace was adorned with a beautiful rose garden designed in a form suggestive of Neo-Renaissance. Meanwhile, the decorations for the Italian garden at the upper and lower terraces retained the character assigned them by Jan III.

History of the gardens – read more.

Improvements in the palace introduced during the 19th century focused mainly on the interiors, which were refurnished and refitted for use as museum spaces and living quarters. In mid-century, the northern façade of the north wing was rebuilt in a Neo-Renaissance style. All the while, the art collection kept growing. The Branicki family were the last aristocratic family to own Wilanów prior to the outbreak of World War II.

After World War II, the state claimed ownership of the Wilanów palace, and, following extensive renovations, opened it to the public in 1962 as a division of the National Museum in Warsaw. In 1995, the Palace became an independent institution under direct control of the Ministry of Culture and National Heritage. Early 21st century saw complex revitalisation efforts focus on the façades of the Palace, the most valuable interiors (the Royal Chambers, and the Chinese and Hunter’s Rooms, among others), and the gardens, as well as the forefield.

History of the museum – read more.