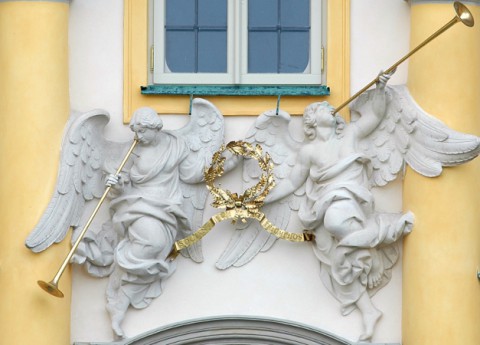 Since June 2006, the Museum of King Jan III’s Palace at Wilanów has been active in the Network of European Royal Residences, participating in the exchange of information and experiences between specialists from various countries – in the areas of scientific research, conservation, documentation, educational programmes, social communication, security and others. The Network, registered as the Association of European Royal Residences (ARRE), with its offices at the Palace of Versailles, brings together 30 cultural institutions that administer royal residences in 15 countries:  Austria (Schloss Schönbrunn), Belgium (Palais de Charles Quint), Denmark (Kongernes Samling), Spain (Patrimonio Nacional), Netherlands (Het Loo Paleis), France (Versailles, Chambord, Compiègne), Monaco (Prince’s Palace), Germany (Stiftung Preussische Schloesser und Gaerten), Poland (in addition to the Museum of King Jan III’s Palace in Wilanów – the Royal Castle in Warsaw and the Royal Łazienki Museum), Portugal (Mafra, Parques de Sintra – Monte da Lua), Russia (Peterhof State Museum-Reserve and the Moscow Kremlin Museums), Sweden, United Kingdom (Historic Royal Palaces), Hungary (Gödöllő) and Italy (Venaria Reale, Racconigi, Turin, Caserta, Naples, Monza). As part of the European Year of Cultural Heritage 2018, the Network carried out the joint project “A Place at the Royal Table”, through which we intended to promote knowledge about historical cuisine and customs associated with the culture of the table, understanding taste and shaping culinary heritage in European tradition. More information about the Network: www.europeanroyalresidences.eu/

The following are some of the workshops and projects carried out as part of the Network of European Royal Residences with the participation of Polish specialists – staff of the Museum of King Jan III’s Palace in Wilanów:

Other international cooperation programmes and projects:

In 2015, the Museum of King Jan’s III Palace at Wilanów established research and popularisation cooperation with the National Historical Archive of Belarus in Minsk in order to develop and make available extremely valuable archival materials related to the history of the Sobieski family, which are held by the Archive. The cooperation between the two institutions is supported financially by the Polish Ministry of Culture and National Heritage. Reports on the work on scanning the archives from Fondo 694: 2016 and 2017.

Experts from Wilanów participate in the programmes of the Zhovkva Reserve of Architecture and History in Ukraine in the field of public communication, research on the Sobieski family legacy, revitalisation and conservation of the castle (most recently architectural research commissioned by the Ministry of Culture and National Heritage). More about the project – here.

We are expanding cooperation with Wincklemann-Gesellshaft EV/Wincklemann Museum Stendal in Saxony-Anhalt/Germany – implementation of the “Johann Joachim Winckelmann (1717-1768) and Stanisław Kostka Potocki (1755-1821). Masters and students” project in 2013–2020, with the aim of carrying out research on the sources of aesthetic, educational, collector and museum concepts of German and Polish precursors and the reception of their ideas in Central Europe. The cooperation consists of scientific exchange, didactic and promotional activities and obtaining funds for the implementation of projects; scientific conferences presenting the experience and achievements gained are organised, publications of the research achievements developed by both parties are published.

The project is managed by a committee composed of: http://www.winckelmann-gesellschaft.com/winckelmann_jubilaeen_20172018/archiv/, more on the ongoing project: http://www.casadigoethe.it/images/stories/pdf/flyerwinckelmann.pdf

Ongoing cooperation in the field of the safety of people and collections is carried out by the Museum of King Jan III’s Palace at Wilanów within the framework of the International Committee Museum Security ICOM Partners:  Czech Republic, France, The Netherlands, Norway, Poland, Sweden and Italy. In 2018, the book Muzeum Bezpieczne [Safe Museum] was prepared for publication in the “Muzeologia” series.

Planning Extended Museums (cultural & natural heritage – society – economy – land & townscape), cooperation of the National ICOM committees from Austria, Czech Republic, Poland and Slovakia within the framework of implementing of the assumptions of the ICOM Resolution “Museum Responsibility for Landscape” adopted in Milan on 9 July 2016. A long-term programme, including conferences and publications (two of them have been already published in the “Muzeologia” series); our task was to organise the MUSEUMS AND IDENTITIES / MUZEA I TOŻSAMOŚĆ conference, which took place on 21–23 November 2018 at the Museum of King Jan III’s Palace at Wilanów. We received a Getty/ICOM grant for its implementation.

Cooperation within the framework of the “Culture and Local Development. Maximising the Impact” project, implementation 2018-2019, 9 countries: Czech Republic, France, Netherlands, India, Canada, Poland, United Kingdom, USA, Italy – OECD and ICOM. The project, financed in 2018 by the Ministry of Infrastructure and Development, involves studying museums in terms of their impact on local and economic development.

From 7 July to 1 November 2017, an exhibition entitled “Jan III Sobieski. A Polish King in Vienna” was held in the Winter Palace in Vienna.   Work on its preparation began in 2014, and the main organizer of the exhibition was the Museum und Schloss Belvedere. On the Polish side, the preparations involved four royal residences (Royal Łazienki Museum, Museum of King Jan III’s Palace at Wilanów, Royal Castle in Warsaw, Wawel Castle).

Staff of the Museum of King Jan III’s Palace at Wilanów offer their experience to Lithuanian partners managing the Trakai National Historical Park on commission of the Ministry of Culture and National Heritage. The cooperation consists in conservation expertise and the introduction of educational projects in Lithuania, including nature projects, which work well in the Wilanów Museum, as well as in the joint organisation of exhibitions. We continue to cooperate in the field of social communication and research of the identity of the place (organisation of seminars and public debates) within the framework of the Genius Loci association, which includes people involved in exchanges from both institutions, on both sides of the border. Frequent working meetings are held in Poland and Lithuania, also devoted to the creation of cultural industries. Six people from the Museum of King Jan III’s Palace at Wilanów participate in the program.

As a result of cooperation with Staatliche Kunstsammlung Dresden, Porzellansammlung, within the framework of the “Meissen porcelain in the 18th century for the nobility and aristocracy in Poland” research project, the database of the Meissen products from 1710 to 1814 is available on the Wilanów Palace Museum website.

Under the Agreement between the Government of the Polish People’s Republic and the Government of the Italian Republic on Scientific and Technical Cooperation signed in Warsaw on 27 November 1960, the Wilanów Palace Museum, together with the Palazzo Reale di Napoli and Seconda Universita’ di Napoli, implemented in 2013-2014 the project “QR-code in museums: technology for cultural heritage promotion”, concerning the use of QR code technology in residential museums.

“Mobility of collections”, Berlin, Hamburger Bahnhof (headquarters of the Institute for Museum Research of Berlin State Museums) – 3-4 June 2013, participation of the museum in a conference summarising and attempting to outline the prospects for the continuation of the work of the Working Group of the European Commission on the evaluation of ways and means to simplify the lending process in the EU (operating for the years 2011-2012 and bringing together delegates from all EU Member States).

The Museum also takes part in the “Nieśwież Academy” project, established within the framework of Polish-Belarusian cultural cooperation.