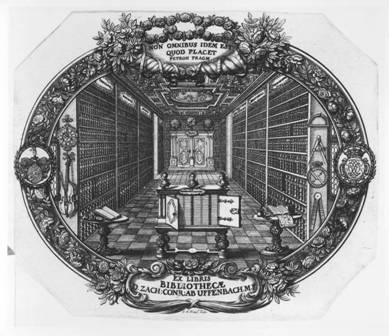 Copperplate by Johann Ulrich Kraus, end of 17th century.Picture from the collection of the National Library in Warsaw.

The fame and glory of Jan III Sobieski as a magnificent statesman and commander has slightly overshadowed other features of his greatness, characteristic for his intellect and personality. This monarch proved to be a true lover and collector of books, who found time in the overwhelming tide of state affairs to read and follow the progress of knowledge. Consequently, not only did he animate the bibliophile traditions of the Polish monarchs, but also amassed one of the largest book collections of the seventeenth century.

This feat became possible predominantly due to a love of reading instilled by his father, Jakub Sobieski, which in later years changed into a great passion. For all practical purposes, Jan Sobieski was constantly learning, a fact that exerted a great impact upon the moulding of his extraordinary personality.

The universal book collection amassed by Jan Sobieski reflected the interests of a king who had at his disposal an almost all-sided knowledge. No wonder that diplomats and papal nuncios at the court of Jan III were delighted with his intelligence and informed: ”The king, devoted to science, reads books on assorted domains of knowledge” (something that they certainly would have been unable to say about Louis XIV). Sobieski read, apart from serious scientific literature, also much lighter writings, such as the 23 volume-long novel about Cleopatra by La Calprenède or the fashionable shepherd romance Astrea by Honorius d’Urfe. He was fond of poetry and worshiped Virgil and Ovid, quoted whole fragments of Jan Kochanowski and was familiar with Tasso. More, he read even during the most difficult moments, which required utmost concentration - wartime campaigns, marches and forays. He took books with him everywhere, to be enjoyed in tents and sometimes under the open skies; the royal campsite library contained Galileus, Huygens, Harvey, Descartes, Gassendi and Pascal but also Corneille and Moliere. Sobieski also read the press.

The basic part of the royal library was kept in the family residences in Żółkiew and Wilanów. Ten catalogues of books belonging to Jan III Sobieski were prepared in the years 1689-1740. Only one has survived to our times, written in 1689 by the library custodian Adam Adamandy Kochański, printed in Cracow by Jan Tadeusz Lubomirski in 1879. This catalogue contained a list of 1 404 works in about 2 000 volumes, and registered only a fragment of the large collection, totalling some 7 000 volumes.

We do not know what the libraries of Jan III looked like, although    quite certainly both in Żółkiew and Wilanów books were arranged on the shelves in some sort of order. An approximate image was conveyed by Johann Ulrich Kraus (1655–1719) of Augsburg, whose copperplate depicted the book collection of Zacharias Conrad von Offenbach from the end of the seventeenth century.