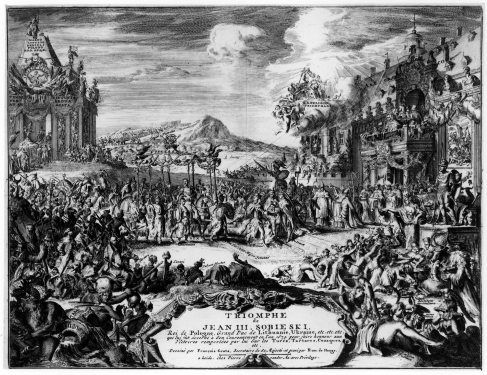 Romeyn de Hooghe, based on a drawing by Francesco Gratta the Younger: Jan III Sobieski’s entry into Cracow for coronation, picture from the collection of the National Library in Warsaw.

Elected king in May 1674 in the atmosphere of general enthusiasm, Grand Hetman Jan Sobieski had to wait for his solemn coronation in the Cracow cathedral. Put off for a long time, the ceremony took place no sooner than on 2 February 1676 in the presence of Primate Olszowski, Archbishop of Lviv Wojciech Koryciński, a few bishops and numerous senators. The proper coronation of Jan Sobieski and Marie Casimire was preceded by the king’s grand entry into Cracow on 30 January.

According to eye-witness accounts the city honoured Sobieski, compared to Bolesław the Brave, by raising welcoming gates which praised his numerous victories, above all the victorious Battle of Chocim. The coronation vehicle was an open carriage upholstered with crimson velour, trimmed with gold and padded with white satin. As reported by a contemporary witness, the monarch was dressed in “a blue sable-lined overcoat interwoven with gold and silver, crimson lined żupan interwoven with gold, diamond buttons and a clasp of large diamonds as well as a huge ruby unseen elsewhere in Europe. His calpack with a diamond bow had three pearls of immense size and three heron feathers attached”. Sobieski was riding “a gorgeous grey horse in a blue cloth of gold” with diamond trappings.

With the coronation in mind, the outstanding Dutch printmaker Romeyn de Hooghe (1645–1708) made in 1675 (i.e. before the ceremony) an impressive etching depicting the entry of Jan III. The composition, etched according to a drawing by Francesco Gratta the Younger, is of symbolic character and has little in common with reality. It represents a triumphal march all’antica of a victorious leader, returning from a battlefield and passing through a triumphal arch (the Temple of Virtue) on his way to the Wawel Castle. In the centre Sobieski on horseback underneath a canopy, dressed like a Roman emperor, is leading the victorious army with the captured prisoners of war, spoils and trophies. The canopy is held by four Virtues: Justice, Prudence, Sedateness and Vigilance. The leader is greeted by personifications of Poland and Lithuania. The foreground is filled with numerous allegoric figures, inter alia Generosity, Benevolence and Merriment.

Romeyn de Hooghe copied the composition, also known as The Apotheosis of Jan III with no major changes in another reduced printed version published in ca. 1700 by Pieter Boudewyn van der Aa in Leyden. The etching, in the collection of the National Library, bears a different title in the foreground cartouche, namely: Triomphe de Jean III Sobieski Roi de Pologne (…) and the signatures of both the printmaker, the author of the concept and the publisher’s address. The two etchings represent high artistic quality, though their value as documents remains problematic.