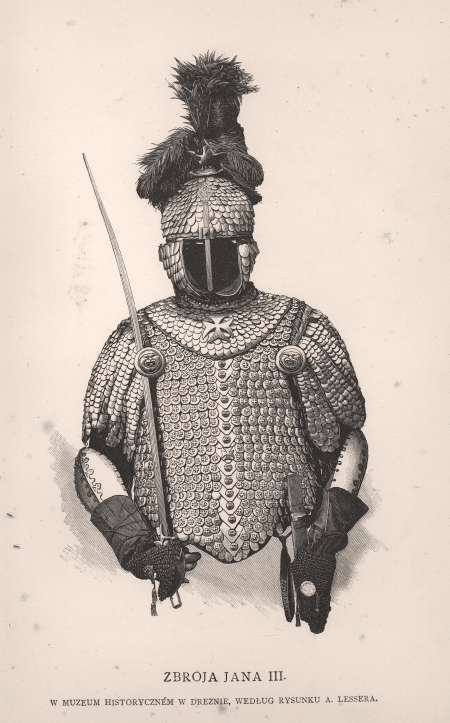 Franciszek Szymański, based on a drawing by Aleksander Lesser: Karacena of Jan III Sobieski, picture from the collection of the National Library in Warsaw.

Karacena is a type of armour made of iron scales riveted on leather and represents the most original product of Old Polish culture. It was nowhere else but in Poland that this new, significant type of weaponry was created, based on former Sarmatian or Scythian armours (incidentally immortalized in Roman triumphal columns) as well as late-ancient armours. Karacena was admittedly an eclectic invention, but of such a perfect composition that it retained a full stylistic unity. At this point it is worth clarifying that the term “karacena” derives from the word “corazzina”, referring to a leather armour or a studded leather armour.

The Polish karacena appeared and gained popularity in 1675–1700. It was used until the mid-eighteenth century. It was expensive, more stunning than useful and incredibly heavy – it weighed from 25 kilos up (for the sake of comparison, an average suit of armour of a Hussar, i.e. a winged cavalryman, with a bascinet weighed ca. 15 kilos). Jędrzej Kitowicz claimed in his Opis obyczajów za poanowania Augusta III [Description of customs in the reign of Augustus III] that this type of armour, “composed of carp-like scales (…) was more comfortable due to its flexibility”. In reality however, a knight wearing it found it hardly comfortable, and in addition its resistance to bullets did not exceed that of a plate armour.

Senior winged and armoured troopers were above all entitled the wear a karacena, above all the highest rank commanders – hetmans and the king himself. It was Jan III who rendered it famous, as not only did he wear it, but also posed for portraits.

Extant in the collection of the Historisches Museum in Dresden there is an original karacena from the former royal armoury, dating back to 1675–1700, traditionally associated with Sobieski. Made in Poland, the steel suit of armour forged, burnished and gilded comprises a helmet, a breastplate, a backplate, a bevor and a pair of brassards totally covered with scales. The tradition states that Jan III offered the discussed karacena to Johann Georg III, Elector of Saxony, which finds confirmation in the Dresden inventory Türkenkammer of 1783, wherein on 23 May 1719 the artefact was included in the Wettin collection. Initially enamelled, it had a leather base lined with velvet. Due to its construction and decoration, the discussed karacena gained a special place in the collection of Polish scale armours dating back to 1650–1700 and the beginning of the eighteenth century. It also drew attention of various artists. A good example of its printed reproduction (of nearly documentary character) is the en face view in the full-page woodcut by Franciszek Szymański based on a drawing by Aleksander Lesser. The print was included in Józef Łoski’s epoch-making work Jan Sobieski, jego rodzina, towarzysze broni i współczesne zabytki [Jan Sobieski, his family, comrades-in-arms, and contemporary monuments], published in Warsaw in 1883 to commemorate the bicentenary of the Relief of Vienna.

Franciszek Szymański, based on a drawing by Aleksander Lesser: Karacena of Jan III Sobieski, woodcut, publ. 1883.