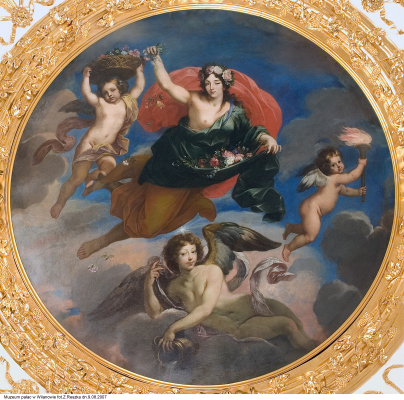 The second scholarship holder of King Jan III Sobieski next to Jerzy Eleuter Szymonowicz–Siemiginowski was Jan Reiner (Rayzner, 1655-1713), painter, architect, geometrician and geographer, probably from Lwów or its environs. The beginnings of his artistic career were similar to Elueter’s - together they studied in Rome, returned home via Vienna and worked in Wilanów. Reisner – winner of first prize at the St. Luke Academy in 1688, in November of the same year became a member of the Academy and received from the pope the Order of the Golden Spur with the titles Lateranensis Comes and Aureate Militiae Eques.

From about 1678 the artist (for the first time mentioned in Warsaw on 3 April 1674) was connected with the court of Jan III, where he appeared as the “Cavalier and painter of His Royal Majesty”. In 1690 he became the owner of the ”ad Villa Brudno” estate, granted to him a year earlier, and on 28 February 1696 Sobieski presented him with a plot in the Powiśle district near the Royal Castle. To 1696 Reiner was employed in Wilanów as a painter and had two helpers specially assigned to him. After the death of his patron he not only requested Augustus II to corroborate the right to the two estates but also won the privilege of the royal geographer and geometrician (1699). As such he worked after 1702 for Dobrogost Krasiński in his estate in Krasne and Węgrów (where he died and was buried in the local parish church).

The artist’s testament revealed both his wealth and generosity. Reisner bequeathed to the Warsaw Visitant convent (which his stepdaughter joined) an enormous legacy of 6 000 tynfy – exactly the same sum as the one that the order received from Queen Ludwika Maria. Apart from  assorted donations (a chalice, two chasubles and two carpets) the painter also offered ”several large and magnificent paintings executed by him”. The unpreserved canvas Lamentation (formerly known as Deposition from the Cross) provides excellent evidence of the artist’s skills. This well-conceived and precisely constructed composition must have been popular since we know of four repetitions of the Visitant painting from the turn of the seventeenth century, featured in, i. a.   churches in Studzianna–Poświętne and Biała Podlaska. The second extant painting by Reisner – a mythological plafond entitled Dawn in the Mirror Study at Wilanów Palace - was once attributed to Claude Callot. In many respects, it resembles the above-mentioned Lamentation and in fact depicts Queen Maria Kazimiera as Dawn, surrounded by her three sons as Winds. In 1877 Dawn inspired a woodcut by Marcel Wiśniewski, after a drawing by Stanisław Witkiewicz. The presented print embellished Willanów. Album widoków i pamiątek by Simborowicz and Gerson, published in Warsaw in the same year.

Hypothetically, Reisner is associated with an oil painting Glorification of the Virtues of Jan III, from about 1683-1690 (National Museum in Warsaw), possibly a project of a plafond for the King’s dressing room in Wilanów Palace or a painting decorating the room preceding the baths in the palace in Żółkiew. The likenesses of Prince Louis II de Condé and Prince Henry de Turenne were recorded in the Żółkiew inventory in 1694.