Jerzy Franciszek Kulczycki – the founder of the first café in Vienna 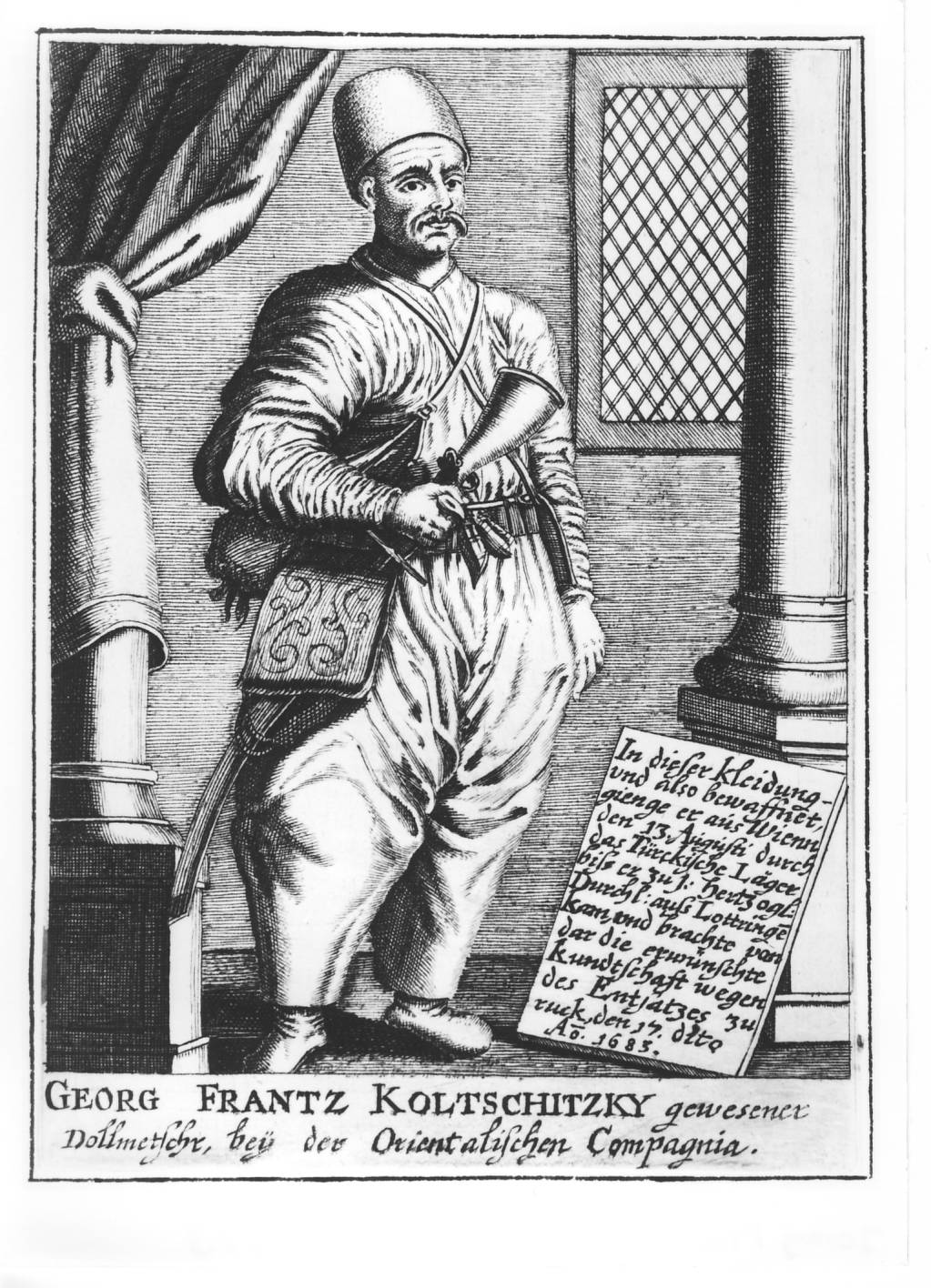 An anonymous German engraver: Portrait of Jerzy Franciszek Kulczycki, picture from the collection of the National Library in Warsaw.

Jerzy Franciszek Kulczycki (actually Kolczycki or Kólczycki, ca. 1640–1694), a translator of Turkish and dragoman* of Eastern Trade Company, made his name in the Polish and Austrian history almost simultaneously as the heroic messenger from Vienna besieged in 1683 and the founder of the first café in the city.

Period sources reveal that Kulczycki considered himself “a native Pole” from “the royal Polish free city of Sambor”. He probably came from the Polonized Roman Catholic line of the originally Russian Kólczycki family from Kulczyce village near Sambor, very likely the noble part of the family bearing the Lis [Fox] coat of arms. Nevertheless, Kulczycki’s nationality was frequently questioned. Ukrainian scholars consider him an Orthodox Ukrainian, a Zaporizhian who went on numerous expeditions against the Turks and spent two years in Turkish captivity. Austrian and Hungarian historians see in him a Serb Djuro Kolèic of Zombor and interpret his alleged identification with Poland as mere camouflage. Practically nothing is known of Kulczycki’s youth apart from the fact that he came to Vienna from Serbia. He spoke Turkish and Hungarian and was employed as a translator in a Belgrade office of the Oriental Company, a Viennese merchants’ association for trade in the East. Having become an independent trader of oriental merchandise, he settled in Leopoldstadt near Vienna. When the capital of the empire was besieged (July 1683), after five weeks of ongoing battle Kulczycki carried out an important mission. Acting in agreement with the city mayor and the commander in chief of defence Count Starhemberg, he dressed up as a Turkish soldier and in the late evening of 13 August he left Vienna pleading for help. Kulczycki passed through the Turkish camp unharmed and in the morning of 15 August he reached Charles V, Duke of Lorraine, whose written answer he brought back to the besieged city. This deed made him famous and rich; he received the rights of a Viennese burgher and a plot of land to raise his house on, located in the spot of contemporary Little Bishop’s Palace. He was also appointed the emperor’s translator of Turkish (1684).

Directly after the battle against the Turks, Sobieski apparently handed Kulczycki trophy sacks of coffee seeds left by Kara Mustafa. Taken by the victorious army for camel forage, the seeds were used by the vizier to pep up his soldiers in fighting and military engineering activities. At Domgasse 6 Kulczycki opened the first café in Vienna. Initially the bitter and tart beverage was not enthusiastically received, but soon gained appreciation when the café owner began to sweeten its taste with honey, sugar and eventually added milk. With time Vienna gained reputation as the world capital of cafés, which it prides on to this day, while Kulczycki was named patron of Viennese café owners. His oil portrait decorated the interior of their association, while their old guild banner depicted the scene wherein Emperor Leopold I was granting Kulczycki the privilege of running the café.

Extant portraits of Kulczycki’s, also known as Georg Franz Kolsitzky (died of tuberculosis), invariably present him in Turkish dress, a horn in his hand and a moneybag attached to his belt, standing inside a room against a barred window. The anonymous German copperplate engraving in the National Library collection, executed after 1683, is a probable duplicate (like many other prints) of the oil Viennese period prototype of unknown authorship. The image is accompanied by a plate with inscription pertaining to Kulczycki’s heroic deed.

* dragoman – in the Middle East: translator, mainly from (and to) Turkish, Arabic, Persian, employed by embassies and consulates; or tour guide.