Jerzy Ossoliński's legacy to Rome in 1633 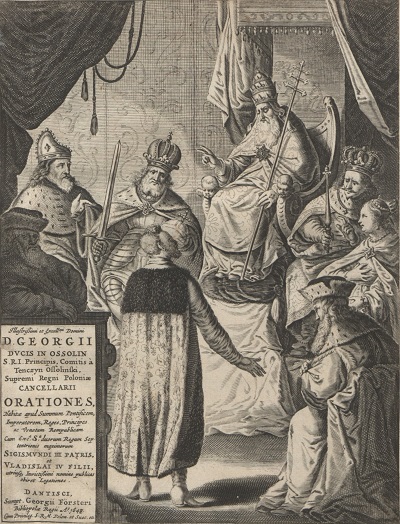 Manuscript collections of the National Library of Poland contain Jan Sobieski's notebook from when he was a student at Kolegium Nowodworskie with rhetorical exercises. It includes congratulations addressed to Jerzy Ossoliński on account of his being appointed to the Chancellor's office. The panegyrical text using laudatory motifs ends with a presentation of the most important proof of the fame of the new minister. Teenage Sobieski speaks of Ossoliński's legacy to Pope Urban VIII on behalf of King Władysław IV in 1633, claiming that Rome has never seen anything more notable and glorious. It is only a minor trace of the fame and legend surrounding the event.

The purpose of Jerzy Ossoliński's legacy to Rome was to pay tribute to the Pope in the name of the newly elected (in 1632) king (so-called legacy of obedience). The legate was also entrusted with various specific political issues (e.g. of financial aid and dispute between Krakow Academy and Jesuits), however, the entire event was mainly planned as a spectacle with a visible ideological message shaping an image of the Commonwealth for the sake of Europe.

The solemn entry of the Polish legation to the Eternal City took place on 27 November 1633, and the legate and his party, in a similar order, went to the Papal audience on 6 December, where Ossoliński gave an excellent speech in Latin. The event was broadly reported in local and international publications (e.g. Sławny wjazd do Rzymu (The solemn entry to Rome) [...] b.m.r.; V. Parisi: Relatione delle solenne entrata [...] Romae 1633), journals and numerous accounts preserved in manuscripts. The entry is also illustrated in a series of etchings by Stefano della Bella (1633 and 1650), which commenced the history of graphic presentations of the event (e.g. of the 17th century: painting by anonymous Italian artist at the Wawel castle in Krakow, Italian school painting at the Kórniki castle or Canaletto's [Bernardo Belotto] Jerzy Ossoliński's entry to Rome, 27 XI 1633). All the accounts emphasised the great impact made by the procession attending the legate, describing its exceptional splendour and "Polish clothes, never before seen in Rome" (Zygmunt Koniecpolski Zwierciadło dzieł rocznych manuscript of the Kórnik Library 201, p. 425).

The selection of garments worn by the legates was so important that Jerzy Ossoliński mentioned it in his official report for the Sejm. He said: "[...] I thought it reasonable not to change the garments whosemilitarem gravitatem [military dignity] and handsomeness would certainly be appreciated by those nations [...]."

The legate chose not to comply with the local customs, like other Poles did when they travelled in Europe, but instead, he used the rich Polish clothes, influenced by the Orient, as the nucleus of his propaganda.

It is impossible to describe the opulence and variety of the entire legacy, so let me give you an idea of what it looked like by mentioning a few details. Instead of quoting the prose, I will use the epic poem by Samuel ze Skrzypny Twardowski, called by his contemporaries the Polish Maron, who included in his poem Władysław IV a detailed description of the legacy and even the legate's entire speech translated into verses: Here it is:

"[...] at the beginning,
a couple of attendants lead carriages covered in crimson
cloaks falling down to the ground; followed by gilded
Axes, the legate's possession,
pulled by handsome mules;
next, ten camels carrying expensive
household item [...]
and ridden by Persians and Armenians
in Turkish turbans; after them,
trumpeters in the same colours and ostrich panaches,
playing the rhythm for forty Cossacs [...]".

Of course, the legate himself is the most prominent in the description:

"[...] the horse under him of incomparable beauty
and garments, trotted along,
glittering with expensive jewellery
and forsterite; gown embroidered
with gold scales and button loops
decorated with diamonds,
pearls and bloody rubies [...]".
[Point IV, in. 1436-1442]

What is surprising today, in an era of digital communication, is how scrupulously the types and colours of garments were reported, and even the estimate prices of jewels. We know, for example, that the legate's senior valet Kociszewski, was riding a horse and shaking his spear, dressed in white and wearing hussar wings of crane feathers, and his horse had turquoise tack and feathers on its legs, and he was followed by thirty valets in light blue satin coats with orange lining. They were followed by Armenian and Tatar servants leading the legate's horses, and the saddle of each horse was set with different precious stones, and the saddle and tack of the last horse glittered with diamonds. Horses had golden horseshoes, which were intentionally lost to be looted by enthusiastic crowds.

The entry spectacle had a clear ideological message and it was a manifestation of the grandeur and cultural otherness of Poland. The same message was repeated and emphasised in Ossoliński's oration. As was customary, the tone of the speech was laudatory. Those who paid tribute to the Pope were first of all expected to laud him. Indeed, the speaker praised Urban VIII, but he did it in a peculiar way. He used a method that in classical rhetoric is called indirect amplification (ratiocinatio), where the recipient is left to guess who exactly is being lauded. The Polish legate's speech was, from beginning to end, a praise of the Polish King and the Commonwealth, and the Pope was only indirectly glorified by the bracketing tribute motif at the beginning and at the end of the speech. The grander is Poland the grander is Urban VIII, too.

"Thus, great Poland is the first to kneel before you, Holy Father. The neck unaccustomed to carrying any slave's burdens, the free hands, and the superiors brain born to rule, following the example of its King and the custom of ancestors, are lowered before you and at your service" [after Polish translation from Latin by J. Cynerski-Rachtamowicz, 1634].

It is clearly visible here that the favourite tool of Baroque rhetoric was paradox and its purpose was to astonish. Such justification of the glorification of the Commonwealth allowed Ossoliński to formulate, in his speech addressed to the Pope, almost a manifest of the proud Sarmatian self-consciousness. For this purpose, he used ancient topoi, popular in Polish literature. He presented Poland as a "Northern country" (the first to use this expression was Gallus Anonymous), inhabited by brave and freedom-loving people (Cicero described Romans in this way), who with their bare chests (like Spartans) defended Christianity (antemurale christisnitatis). Roman literature, from where came the "Northern country" topos, also recorded the image of its wild and rugged inhabitants. Ossoliński overtly argues with such image and the accusation sometimes raised against Poles-Sarmatians: "We would ill serve the ancient City, offended by the cruelty of our ancestors, if we trespassed against its rules and customs."

This way, in the description of the national character, he made a synthesis of the Polish barbarian tradition - that gave rise to the bravery and ruggedness of manners and the tradition of Rome - whose culture and religion were adapted by Poles. The effect of the synthesis is a symbolical presentation of the migration of the Muses, who "joined the camp and got accustomed to soldierly life, having parted with Helicon forever. They so captivated our nation that without their support and adornment, the fame of the army would not be what it actually is." Here, he spoke almost like Vergilius, who was the first to move the Muses to Rome. Thus, Poland, representing the North, turns out to be the only worthy heir of European culture. After all, what does the South have now that the Muses have left it. These are probably the boldest words one could say in the Eternal City.

The best proof of the Sarmatian conviction of being the follower of the Roman tradition was the Latin language used by the legate in his speech, so beautiful that the Pope reportedly said that Cicero himself would not speak it better.