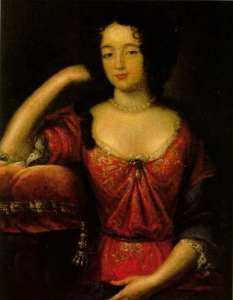 Maria Kazimiera de la Grange d’Arquien, known as Marysieńka (1641-1716), the queen of Poland. Born in Nevers and from childhood in the entourage of Maria Gonzaga de Nevers, later Queen Ludwika Maria of Poland, who brought her over to Poland in 1652 (or 1653). Her marriage to Jan Zamoyski, the ordynat (the principal heir of an ordynacja - landed property in fideicommis) of Zamość (1658), was an important element of the queen’s political plans, which involved creating a political faction. In 1659 Maria Kazimiera established closer contacts with Jan Sobieski; she was  requested by the queen to win over her husband and Sobieski for plans of a vivente rege election. In 1661 Maria Kazimiera and Sobieski took vows of love at a Carmelite church. During the following years, they considered upon several occasions settling down permanently in France.

For a certain time, Maria Kazimiera was less connected with court politics, but in 1665 she became engaged in the realisation of the queen’s projects and urged Sobieski to accept the rank of marshal. Several months after the death of Zamoyski, Maria Kazimiera and Jan Sobieski married (July 1665). After the death of Queen Ludwig Maria, in 1667 Marysieńka left for Paris, where she gave birth to a son, Jakub. She counted on bringing over her husband and living in France, but Sobieski’s growing popularity in Poland, connected with his military accomplishments and his unwillingness to leave the country, put an end to those plans. Marysieńka treated the election of Michał Korybut Wiśniowiecki in 1669 as a defeat, since she was a supporter of the French candidate; hence, she joined efforts aiming at the dethronement of the king.

The military triumphs of Sobieski and the death of Michał Korybut mobilised Maria Kazimiera to pursue lively endeavours aimed at a coronation of her husband. His election in 1674 was her personal success. It is believed that Marysieńka’s impact upon Hetman Jan was much greater than when he became king. She attempted to win for herself and her family as many material benefits and titles as possible, including a cardinal’s title for her father from the pope and the title of a duke from Louis XIV. Striving to guarantee the throne for Prince Jakub, she initially decided to support the pro-Hamburg option and when the project of marrying him to Ludwika Karolina Radziwiłł, the marchioness of Brandenburg, failed, Marysieńka turned towards Versailles. This was the reason for the clash with her oldest son, in 1691 married to the empress’s sister. At the end of the Jan III’s life, Marysieńka considered the possibility of re-marrying, and her candidate was Great Hetman of the Crown Stanisław Jabłonowski.

After her husband’s death in 1696 and despite controversies with Jakub, she loyally backed the latter’s candidature and in the face of failure opted for Augustus II. Maria Kazimiera did not support artists nor became involved in expanding her residences. Her part played in the construction of Marywil – a trade centre and a residence – stemmed more from economic impulses than artistic ones, while her participation in the construction of Wilanów was extremely limited. In 1699 she left for Rome, where she was favourably received. Her relations with the dignitaries of the Roman See, however, slowly deteriorated as did her material situation, and in 1714 she moved to Blois (France) where she died. In 1734 Marysieńka was buried together with Jan III in the cathedral crypt on Wawel Hill. In both marriages she gave birth to 13 children, but only four Sobieskis lived on to reach adulthood: Jakub, Aleksander, Konstanty and Teresa Kunegunda.