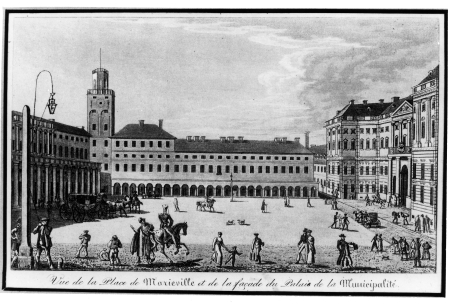 Fryderyk Krzysztof Dietrich, based on a drawing by Jakub Sokołowski: View of Marywil in Warsaw, picture from the collection of National Library in Warsaw.

Apart from the Sisters of the Blessed Sacrament church and the Marymont (Marie Mont) Palace, the third of Queen Marie Casimire’s foundations designed by Tylman van Gameren was Marie Ville (Mary’s City), a metropolitan complex of residential and commercial character, called Marywil by inhabitants of Warsaw. Raised in 1691–1695, it occupied the western part of today’s Theatre Square. Designed as a stately square, or more accurately a courtyard surrounded by palace-like buildings on a rare pentagonal plan, in its general concept it alluded to French royal palaces built in Paris from the beginning of the seventeenth century. Four sides of the complex were made up by residential and commercial wings with arcades in the courtyard. The fifth side was formed by a fence overlooking a garden, wherein Jan III personally planted trees.

Another one of Marywil’s functions was to be the setting of various court celebrations – parties, games, fêtes, receptions of foreign envoys and the like. It also fulfilled a significant role at the end of Sobieski’s reign. To this end, a centrally-placed temple-monument was to be erected in the heart of the courtyard. The project was eventually reduced to a chapel located in the middle of an uninhabited side of the Marywil complex, thus shifting its main architectural and ideological focus (the chapel was constructed in 1695–1708).

Due to the establishment of a large-size square and the construction of first the National Theatre and then the monumental Grand Theatre, in 1825 the walls of former Marywil, now in danger of collapsing, were earmarked for demolition. “Kurier Warszawski” [“The Warsaw Courier”] daily reported live in the issue of 27 August 1825 that, “In the course of dismantling the Old Marywil, among bricks workers found a coin from 1687 featuring the bust of Jan III; it seems that this part of Marywil was raised in the same year and a bricklayer must have dropped or lost the coin, a true rarity these days”. On 28 September 1825 the same daily informed that the foundation stone had been exposed underneath the chapel (“discovered was a sand-coloured stone with a hole containing bone relics and a small silver plate with a Latin inscription”).

The sepia-toned aquatint (combined with etching) by Fryderyk Krzysztof Dietrich (1779–1847), entitled Vue de la Place de Marieville et de la façade du Palais de la Municipalité, from a set of 10 prints illustrating Józef Wawrzyniec Krasiński’s publication Guide du voyageur en Pologne et dans la République de Cracovie (Varsovie 1820), provides perhaps the last iconographic representation of Marywil before its demolition. The edifice with the characteristic arcade stretches directly in front of the viewer’s eyes. Visible on the right hand side in perspective there is the town hall (the former Jabłonowskis Palace). The discussed print, rendered in chiaroscuro, was based on a drawing – probably made from nature – by Jakub Sokołowski (1784–1837), with an elaborate figurative staffage enlivening the veduta.

Fryderyk Krzysztof Dietrich, based on a drawing by Jakub Sokołowski: View of Marywil in Warsaw, aquatint, publ. 1820.