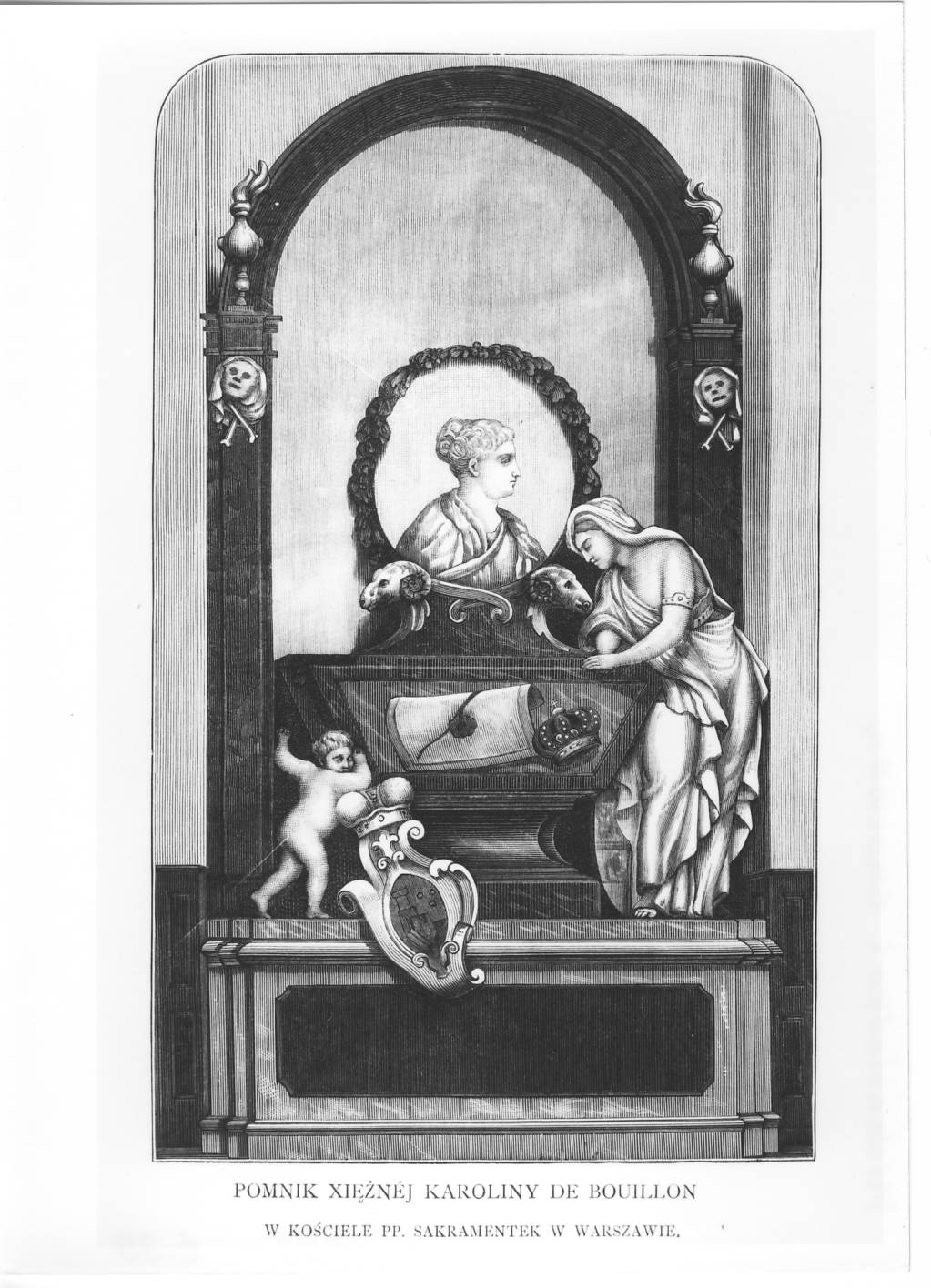 Julian Schübeler, based on a sculpture by Lorenzo Mattielli: Gravestone of Maria Karolina née Sobieska Duchess de Bouillon in the Warsaw church of the Order of the Blessed Sacrament, woodcut, publ. 1883. Picture from the collection of the National Library.

Michał Kazimierz Radziwiłł (1702–1762), called “Michasieńko” or “Rybeńko”, the later Voivode of Vilnius and Grand Hetman of Lithuania, Entailer of Nieśwież and Ołyka, during his entire life meticulously handwrote and edited his own diary. The entry dated 14 November 1719 reads: “I also came to Oława where Prince Jakub [Sobieski] was not to be found (…), only the prince’s wife with her two daughters, Kazimiera (…) and Charlotta; I fell madly in love with the latter” (it needs to be clarified that the event took place when the then 17-year-old Radziwiłł and his sister Katarzyna Branicka were accompanying their domineering mother Anna née Sanguszka on her voyage to Silesia).

Having realized that something was afoot, Duchess Radziwiłł ordained an immediate departure from Oława on the morrow. However, judging by subsequent fragmentary archival records, Charlotta and Michał Kazimierz fell in love at first sight and were to remain infatuated with each another for years to come.

Princess Maria Karolina, called Charlotta (1697–1740), the middle daughter of the Prince of Oława Jakub Ludwik Sobieski and Hedwig Elisabeth of Neuburg, enraptured with her beauty, refinement, intelligence and temperament. In the course of his chronologically earlier stay in Oława (March 1718) in search for an appropriate wife for The Old Pretender James Edward Stuart, Charles Wogan gave the following description of the princess: “She was a pretty little thing, tall, red-haired and well-shaped; she made use of every opportunity to highlight the charms of her figure. Her witty remarks led to outbursts of laughter of surrounding admirers with whom she flirted passionately”. Despite these virtues, Wogan excluded Karolina from the list of candidates because – as he put it – “she would be too difficult to bear for the Pretender”.

Charlotta, five years older than her suitor Radziwiłł, was exceeding the age of 20 and thus inevitably becoming a spinster with sharply decreased chances of getting married. And yet it seemed that this love affair would eventually be concluded with marriage. Michał Kazimierz was enthusiastic about the idea of wedding in general, and of wedding Charlotta in particular. As for Karolina, she could no longer imagine a different groom for herself. Duchess Radziwiłł was seriously considering the entry into the Sobieski family, while Karolina herself looked favourably at the suave young man, the then Starost of Przemyśl. The lovebirds exchanged frequent letters filled with expressions of mutual affection and attachment.

However, eventually their parents decided otherwise. At the end of 1721 the plans of marriage evaporated. Charlotta suffered from extreme depression and initially wanted to hide away in a convent, but Emperor Leopold I Habsburg did not give his permission for such a refuge. Soon an irresistible candidate for husband turned up, namely Frédéric Maurice Prince de Turenne. Karolina Sobieska married him per procura on 23 August 1723 in Nysa. The marriage contracted in the atmosphere of sadness and uncertainty was catastrophically short-lived, as only ten days after the formal wedding ceremony held in Strasbourg (4 September 1723) Prince de Turenne suddenly died. The young widow was almost instantly passed on to her dead husband’s brother, Charles Godefroy de la Tour d’Auvergne Prince de Bouillon, because Karolina’s dowry amounting to 550 thousand livres had to remain in the possession of the French family. Her second marriage also proved unsuccessful. After getting divorced, Charlotta settled first in Silesia (not in Oława though) and from November 1735 in her home town of Żółkiew. Shortly before her death she bequeathed her entire fortune to “Rybeńko”. As token of gratitude, the latter founded Karolina a medallion-type gravestone in the Warsaw church of the Order of the Blessed Sacrament.

Erected in 1746, this monument of interesting iconography attracts the viewer’s attention by three elements. The first one is an oval marble medallion bearing a portrait of the princess seen from the right profile; it was created by Lorenzo Mattielli, the court sculptor of Augustus III, active in Dresden. The second element is a broken shield (the Sobieskis’ Janina coat of arms) signifying the end of the bloodline. The third element of interest is a weeping female figure personifying Poland. Meticulously restored after it had suffered serious damages in the course of World War II, the beautiful gravestone of Princess de Bouillon has regretfully lost a lot of its magnificence. The full-plate woodcut by Julian Schübeler, included in Józef Łoski’s publication Jan Sobieski, jego rodzina, towarzysze broni i współczesne zabytki [Jan Sobieski, his family, comrades-in-arms, and contemporary monuments] (Warszawa 1883), illustrates the initial condition of the monument which constitutes one of the most impressive examples of medallion gravestones in Poland.

Julian Schübeler, based on a sculpture by Lorenzo Mattielli: Gravestone of Maria Karolina née Sobieska Duchess de Bouillon in the Warsaw church of the Order of the Blessed Sacrament, woodcut, publ. 1883.