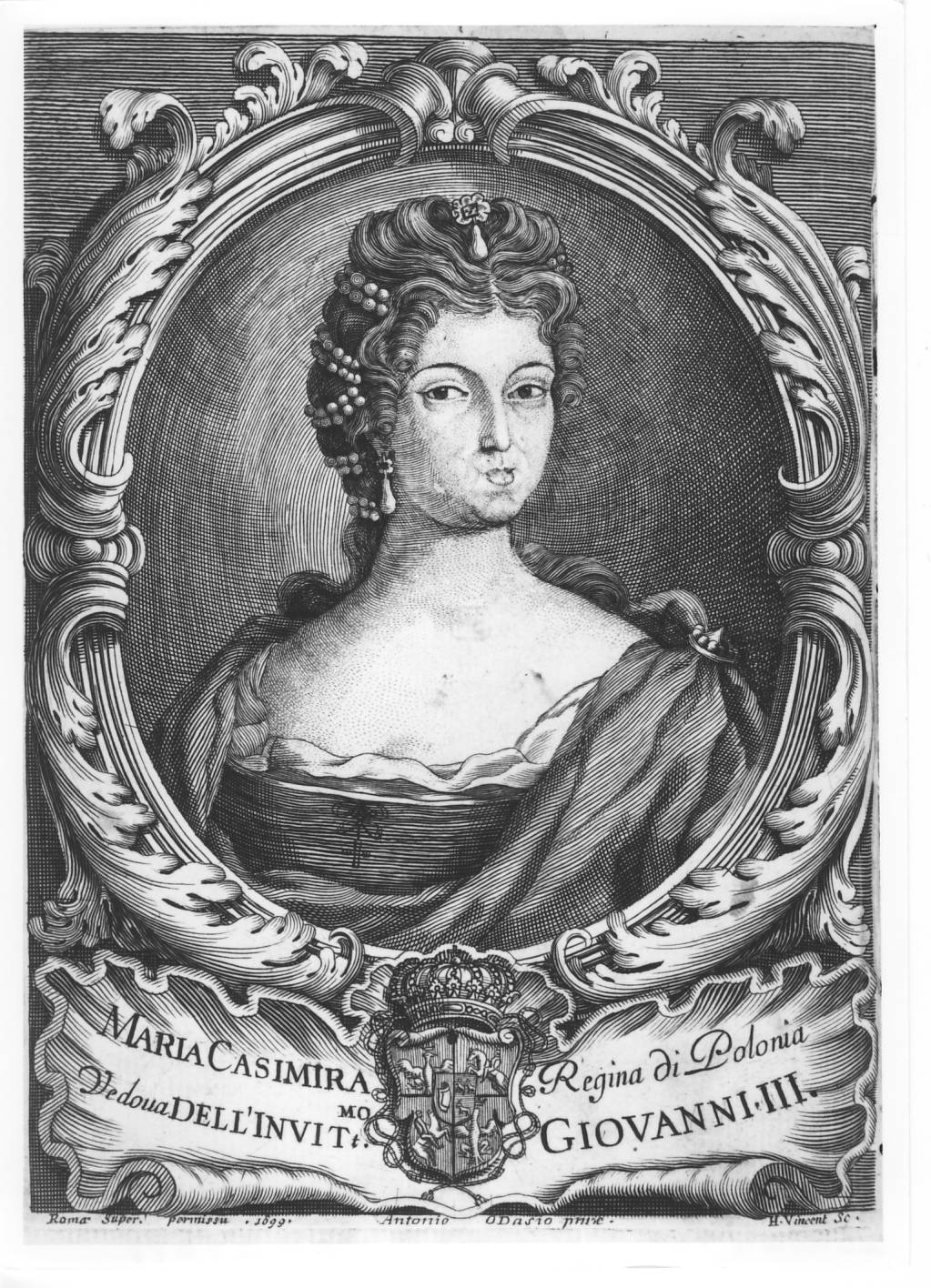 Marie Casimire aged around 60, print from the collection of National Library in Warsaw

The queen quickly adopted to the local Roman environment. The power of her husband’s surname and the royal past opened for her doors of palaces owned by the most influential people in the city. She was invited to residences of Roman and foreign aristocrats, diplomats, omnipotent cardinals and ladies of noble birth. The queen herself organized get-togethers in the residence located at Piazza dei SS. Apostoli, offered to Sobieska at the beginning of the stay in Rome by Prince Livio Odescalchi. She also devoted herself with Counter-Reformation enthusiasm to pietism exercised in numerous Roman churches. On the other hand, she took pleasure in various forms of lay entertainment. Aware of the power of art in the service of politics, Sobieska meticulously arranged stage performances and occasional music concerts in Palazzo Zuccari, her permanent residence from 1702. The theme of the compositions evolved around the recollection and glorification of her husband and the whole Sobieski family. Despite Marie Casimire’s limited power in the contemporary world of Roman and European politics dominated by men, the queen nevertheless managed to make her stay in Rome noticeable, mainly thanks to her consistence, the need for public life, her love for shine and splendour and the craving for admiration.

It is worth observing that the task of focusing the Romans’ attention was not at all easy. Marie Casimire had to face tough competitors in music and theatre patronage, the key among them being Cardinal Pietro Ottoboni. Admittedly, the latter was also eager to serve the queen with his advice and even to lend her the artists he employed. Another serious player was Prince Francesco Maria Ruspoli, one of the richest Romans of the time and the key patron of George Frideric Handel and Antonio Caldara. Other artistic competitors were lesser and greater courts of ambassadors representing various countries and last but not least Teatro Capranica, the only public opera theatre operating in the time of Sobieska’s stay in Rome. One more significant figure was Christina, the already deceased predecessor of Sobieska in Rome. Marie Casimire was frequently compared to Christina already in her time and in later literature.

The queen’s guests to Palazzo Zuccari listened to opera performances referred to as drammi per musica, oratorios, cantatas and instrumental music. Sobieska organized concerts of religious music held in the church of the order she founded as well as the Polish Saint Stanislaw’s church. The courtyard of her palace in turn served as a stage for musical performances of occasional serenades. In the light of contemporary Roman achievements the list of pieces composed on Sobieska’s commission looks impressive. Known to this day are libretti of as many as 8 drammi per musica. They are [1]:

Extant today are only 2 full libretti scores (Tolomeo et Alessandro and Tetide in Sciro), 1 score being a rifacimento of the last opera presented at the queen’s palace (Amor d’un’Ombra e Gelosia d’un’Aura) and some isolated arias (from both Ifigenias). Out of the occasional pieces there are libretti for 6 serenades with a fragmentarily preserved 1 serenade score (Clori, e Fileno). Also extant is a libretto for 1 oratorio (La Conversione di Clodoveo, Re di Francia).

The poetic texts for most of the pieces were composed on Sobieska’s commission by her librettist and secretary Carlo Sigismondo Capece, a writer valued highly by Roman aristocrats, as well as Giacomo Buonaccorsi and Giovanni Domenico Pioli. The music was composed by the still young Domenico Scarlatti, maestro di cappella at the queen’s court from 1709. However, it is worth recalling that the first opera staged at Marie Casimire’s court was probably composed by Domenico’s father Alessandro Scarlatti, highly esteemed in Italy at large and particularly in Rome. Other well-known composers active at Sobieska’s court were lutist Silvius Leopold Weiss, Quirino Colombani, Anastasio Lingua, Pietro Franchi and artists known only by their first names, who came with the queen from Poland. During a solemn ceremony held at the church of S. Luigi dei Francesi Louis XIV awarded the young Sobieskis (Aleksander and Konstanty) the Order of the Holy Spirit; the music for the occasion was composed by Arcangelo Corelli, referred to as Orpheus of his time, and Paolo Lorenzani. Probably Sobieska listened frequently to their compositions at various Roman performances. Though written sources provide no factual evidence, it seems right to assume that she also commissioned compositions from the two artists.

Stage setting for drammi per musica performed at Sobieska’s palace was created by Filippo Juvarra, an outstanding architect specializing in opera stage design. Probably in as early as 1710 Marie Casimire commissioned the artist to execute the stage design for operas to be performed during carnival time of 1711 (Tolomeo et Alessandro, L’Orlando). As it proved successful, the queen and her son Aleksander prolonged their contract with Juvarra (Tetide in Sciro and both Ifigenias). Presumably, elements of his earlier stage designs were also used by the Sobieskis when putting on Amor d’un’Ombra e Gelosia d’un’Aura in 1714, i.e. after the artist had left Rome for Turin.

As it does today, the success of an opera back then depended to a large extent on the performing singers. We known that Sobieska put a lot of effort into employing the best available vocalists. The most famous among them were Anna Maria Giusti detta La Romanina, known for instance from her performances in early Viennese operas by Vivaldi, Maria Domenica Pini detta Tilla, a virtuoso singer of the Florentine court also well-known to Viennese audience, and Caterina Lelli detta Nina. Sobieska was very fond of Giovanna Albertini detta la Reggiana, one of the most outstanding singers of the time. Marie Casimire intended for the latter to perform on stage of her theatre, it seems however that the fee quoted by the artist exceeded the production budget. The Polish queen employed also castrati singers, among them one of the most active artists in contemporary Roman world of music, Giuseppe Luparini-Beccari, or Giuseppe della Regina for short, as well as Pippo della Grance.

Such brilliant cast made Sobieska’s theatre a point of interest on the artistic map of Rome. It also became challenging for private stages of other Roman patrons. Extant notes reveal that the carnival time operas staged by Sobieska were of greatest attraction to the public. Thus, the queen achieved her objective; she was on every Roman’s lips, praised as an active and gifted patron.