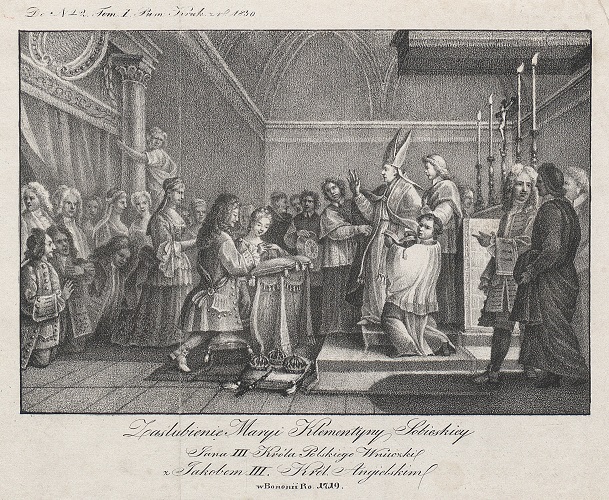 Jan Nepomucen Bizański, based on a copperplate engraving by Anton Fritz, according to a drawing by Agostino Massucci: Nuptials of Maria Klementyna Sobieska, picture from the collection of the National Library.

Thanks to courage and ingenuity of Irishman Charles Wogan, a diplomatic agent employed by the Stuarts, Maria Klementyna Sobieska – the youngest daughter of Jakub Ludwik, Prince of Oława, and granddaughter of Jan III – managed to escape from the Ambras castle on the Inn River in the spring of 1719. On 9 May in Bologna the princess could finally enter into the longed-for marriage with James Edward Stuart, who went down in history as The Old Pretender (the marriage was temporarily contracted per procura with the absent groom replaced by James Murray). Maria Klementyna and her 14-years-older husband met as late as on 28 August of the same year in the cathedral of Montefiascone, north of Rome, where they were married at midnight between 2 and 3 September in the presence of a narrower circle of witnesses. The granddaughter of King Jan III contributed to the house of Stuart a tremendous dowry of 25 million francs and family jewels of incredible size, including the famous rubies.

Pained and printed works recall the scene of the second marriage. The local duomo contains to this day a record of the momentous event in the form of an impressive canvas by Sebastiano Conca. The 1778 inventory of the Nieśwież treasury mentions among its paintings “a large piece depicting the marriage of James III King of Great Britain and Maria Klementyna the Polish Princess”. Regretfully neither piece was copied in printed form. Meanwhile, there was a printed copy made of a drawing by Agostino Massucci (ca. 1691–1758), a Roman painter of religious and historical works as well as portraits. The author of the impressive copperplate engraving was Anton Fritz, a German printmaker active in Rome in 1700–1750. The discussed print was released in the Roman print shop of Giovanni Maria Salvioni shortly after 1719. As if set in a theatre, the print presents an apron stage opening to one of the longer sides. The scene takes place inside a cathedral, in front of the altar, with Bishop Montefiascone blessing the kneeling married couple and with James placing the wedding ring on his fiancée’s finger.

Fritz’s print was copied in form of a reduced lithograph version by Jan Nepomucen Bizański (1804–1878), a Cracow painter, printmaker and teacher. The lithograph was released in a local print shop of Piotr Wyszkowski. It illustrated a short dissertation by Jerzy Samuel Bandtkie, included in the first volume of Pamiętnik Krakowski [The Cracow Journal] (1830). As for Bizański, he took on any kind of work and was one of the teachers tremendously dedicated to their profession, which he carried out until his failing health deterred further systematic work. He died in oblivion, in total isolation and poverty.

Jan Nepomucen Bizański, based on a copperplate engraving by Anton Fritz, according to a drawing by Agostino Massucci: Nuptials of Maria Klementyna Sobieska, lithograph, publ. 1830.