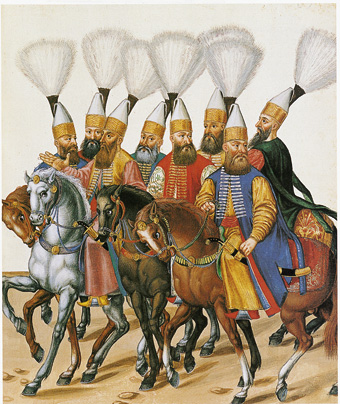 Diplomatic missions to Turkey aroused a lot of excitement in their participants. It resulted from curiosity to see the great empire, its legendary capital, people and their customs, not to mention opportunities to see the Sultan and to become rich by importing goods from there. No wonder that such expeditions – besides the importance attached to them by the ruling circles – enjoyed great interest from the public.

The missions traversed the Turkish state by two routes: by sea and by land. In the 16th century, when the delegations were not very numerous, it was common for them to join  merchant caravans and to travel with them by land or on board the vessels sailing regularly from Akkerman to Istanbul. Besides, an envoy’s entourage itself resembled a merchant caravan as each of the delegates was carrying in his saddlebags items intended to sell or bought in the capital of the Empire. The caravans ensured safety for the envoy and his men, and he himself in return tried to protect merchants from customs duties through his official contacts with the Sultan’s vassals and the local administration. The situation changed in the 17th century, when diplomatic missions began to be entrusted to magnates, who travelled in a far more sumptuous manner, and their entourages were much more numerous, which ensured a safe journey. The issue of security also depended on the relations between the two countries. In the 16th century, Polish envoys did not have to fear anything, but in the next century the situation changed. Admittedly, they were not threatened with imprisonment or exile to the galleys, but from time to time they could be detained under house arrest (as it happened to Hieronim Radziejowski), and their property could be looted. Even treacherous coups could happen; such incident occurred only once and was due to the spying nature of Jakub Podlodowski’s mission and the task he had been assigned to buy Arabian horses, which the Turks viewed with disgust and suspicion. 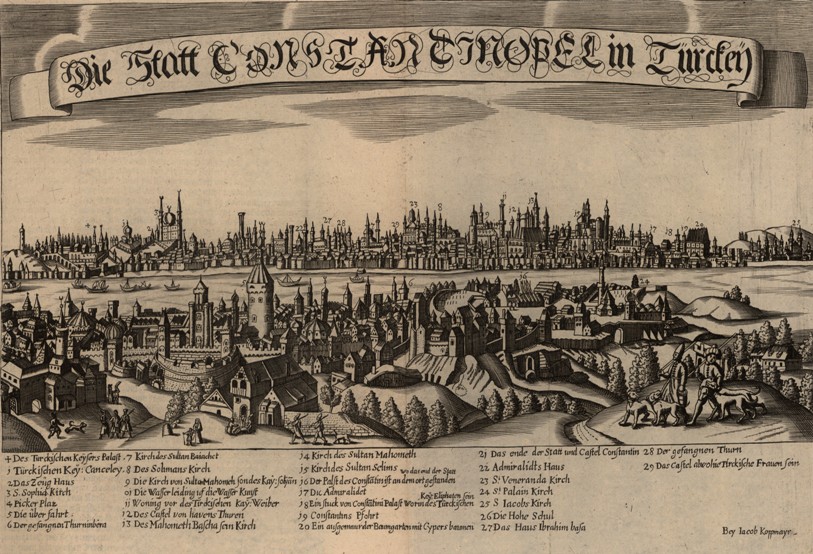 The journey through the territory of the Ottoman Empire passed quickly, the more so as the envoys wanted to arrive in Istanbul as soon as possible. On approaching the city walls the delegation was welcomed on behalf of the Porte by the Sultan’s special envoy – Chaush Pasha – and sometimes even by the Dragoman, the Grand Translator (which happened at greeting the Emperor’s envoy). Sometimes it took place at the last stop before the city, and sometimes at some distance from it. The Turkish emissaries were always accompanied by a colourful procession consisting of Sipahis or even the Janissaries who later assisted the Polish mission at the entrance to Istanbul and on the way to their quarters. One of the recurring elements in the descriptions of missions was the Turkish escort flaunting with the art of throwing javelins. It all often took very long, e.g. in the case of Wojciech Miaskowski’s mission entering Istanbul in 1640, when the envoy arrived at his residence after a few hours’ parade at about 8.00 pm. Of course, all those elements were not for free and after the ceremony the King's envoys had to pay all the members of the procession, from dignitaries to grooms. This custom  was widely complained about, as it could erode the mission’s funds.
In the 17th century, there also appeared a ritual of sending a horse from the Sultan’s stables for the envoy, and the welcoming ceremony outside the city walls often ended with a treat of “sweets, coffee, vodka and smoking, as custom has it,” as recorded in 1699 by Rafał Leszczyński.

During the entering ceremony, both parties tried to make a desirable impression. Leszczyński was preceded by an orchestra, a military unit,  and an entourage of noblemen  accompanying the envoy. Richly dressed reserve horses were led, followed by the mission’s carriages and carts carrying the staff and by armed security guards. Not all entries were so impressive as the Łęczyca Governor’s as all depended on an envoy’s private funds. After such solemn entrance, the procession continued to an assigned inn. Sometimes one of palaces was assigned, a dilapidated and uncomfortable one if dissatisfaction with Polish politics was to be expressed.

Another mandatory item on the agenda of the so-called grand, i.e. official, mission was an audience with the most important dignitaries of the High Porte in accordance with the ceremony order, strictly defined by the Ottomans. The most important was a visit to the Vizier, which had a very official formula. The envoy, again, was ceremonially escorted from his quarters to the Sultan’s residence by a numerous Turkish entourage. There, together with his suite, he was introduced to the audience hall where the Vizier soon appeared. Both sides delivered speeches and next the King's messengers were dressed in caftans corresponding to their rank. The lavishly embellished attire was highly desired by the Polish visitors. Then the envoy’s suite left the residence accompanied by a less solemn escort which had to be given presents, too. After the official visits, days of hard work began which consisted in informal meetings with Turkish dignitaries, however, no longer associated with the aforementioned ceremonies.

The most important part of the mission was an official audience with the Sultan. Also in this case, the envoy and his entourage were solemnly escorted, in a ceremonial procession even more impressive than the previous ones, from their quarters to the gates of the Sultan's palace. They dismounted at a place strictly defined by the etiquette and continued on foot. The Turkish officials already waited in the large audience hall, and after the envoy’s arrival the  Vizier joined them. Before the beginning of the audience proper, a series of events took place intended to influence the attitude of foreign visitors: payment of wages to the Janissaries to demonstrate the power of the Ottoman state, or passing judicial decisions.

After those activities were finished, there followed a short treat, and then the whole gathering proceeded in complete silence to the Sultan. Before that, the envoy and his suite were again clothed in caftans (in the 16th century it was done after the meeting), given generous gifts, e.g. horses, utensils and weapons, and after the audience again ceremoniously escorted to their quarters.

Initially, bestowing caftans and gifts to envoys was a symbol of the High Porte’s satisfaction with the effects of the mission. Later the caftan changed its function. It was handed before the main part of the audience to show that the whole barbaric or non-Muslim world adopted the Ottoman ceremonial and the apparel civilized a barbarian, by definition poorly dressed.

Of course, a stay on the Bosporus was not filled solely with visits to the Sultan or high officials. Waiting for an audience sometimes took weeks, and meetings with the Vizier were not very frequent. Hence, it became natural that Polish diplomats during at times many months of staying in Istanbul enjoyed satisfying their curiosity and visited the city to see its buildings and people. The big bazaar was willingly visited, as the mission was also a chance to increase one’s estate by selling in Poland the products purchased in Istanbul, often at a considerable profit. Clothes, fabrics, weapons, jewellery, tableware, and especially horses were of particular interest. They were valued by the nobility and imported by magnates to their large stables where also horses for the military were bred. So they were purchased (or obtained as a gift) for one’s own use or to resell for a profit in Poland. Equally willingly,  impressions from trips were shared with others, leaving numerous records and reports to bear witness to the extraordinary events that accompanied the Polish diplomatic missions.