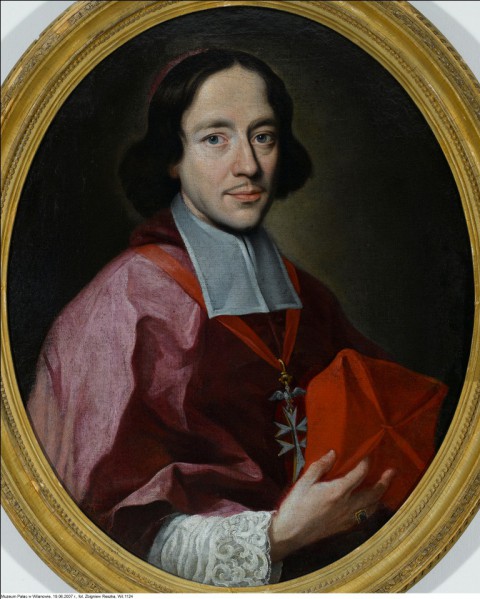 Jan Kazimierz Denhoff, member of one of the most noble and influential Polish families, was born to Katarzyna Franciszka von Bessen and Teodor Denhoff, the then royal courtier. A cardinal, diplomat and resident of Jan III Sobieski in Rome, where he successfully represented the interests of the Commonwealth. Following the victory near Vienna, Denhoff visited Pope Innocent XI and handed him on king’s behalf the Muhammad banner captured from the Turkish troops, which was later hung underneath the ceiling of Basilica of St. John Lateran. He also presented the Pope with other trophies and the famous letter in which the king, eagerly referring to himself as rex orthodoxus (an orthodox king), concisely reported the victory in the spirit of Christian humility: Venimus, vidimus, Deus vicit. Denhoff’s portrait represents a high artistic level. Although its style displays features typical of Italian baroque painting, at present stage of research it is impossible to identify the author unambiguously.

The half-figure portrait depicts the sitter in three-quarter view.  The viewer’s attention is drawn by Denhoff’s slightly elongated face, noble features and his penetrating, intelligent look. The model is dressed in cardinal’s clothes – a pink mozzetta with grey revers; visible from underneath the revers there is a sleeve of a white lace-trimmed rochet. He is also wearing a pink zucchetto. The church dignitary’s ring finger is decorated with a magnificent ring. He is holding a red cardinal’s biretta. A crimson sash crossing his chest features the Order of the Miechowitas. The portrait is made more appealing by its soft chiaroscuro modelling which highlights the presented figure against the dark neutral background.

The most precious painting of the collection

What an artistocrat, a revolutionist, a horse and a dog have in common?

Portrait of a lady in black