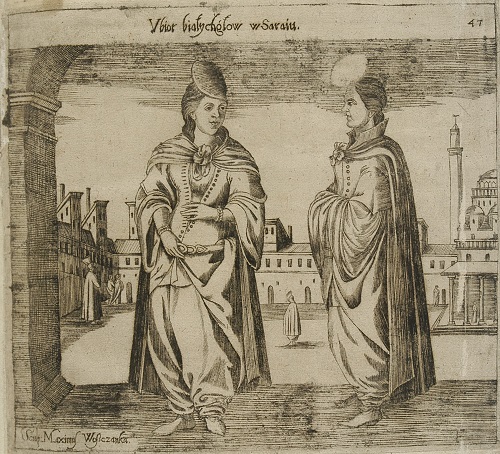 Samuel Twardowski introduced to the last part of his “Important Mission”, i.e. the epic poem which includes an account of Krzysztof Zbaraski’s diplomatic mission to Istanbul where he was sent by Sigismund III Vasa for the approval of the peace treaty after the Battle of Khotyn (1621), an interesting passage showing the history of Roxelana, called Haseki Hürrem in Turkey. As Twardowski writes, she was an Ukrainian Orthodox priest’s daughter from Rohatyn, who was taken prisoner by the Muslims, thus sharing many Christians’ fate. Around the year 1526, she found herself in the harem of Suleiman the Magnificent whom she reportedly dazzled with her beauty, earning the privilege of the Sultan’s first concubine. However, the ambitious slave was not satisfied with such honour and she decided to be awarded the title of the future Sultan’s mother (Valide Sultan), which would give her the position of the first woman in of the Ottoman Empire. It was not easy, as it had already been announced that Mustafa, the Janissaries’ favourite, the son of Gülbahar, would be the successor of Suleiman. However, Roxelana, by intrigues, led first to the murder of Grand Vizier Ibrahim and then Mustafa in order for one of her sons to inherit the throne. As two of her male descendants died before the Sultan's death, the throne was eventually taken by the third in line, Selim (known as Selim II), one of the worst Ottoman rulers. As a Sultana, Roxelana exerted a very strong influence on the state policy; she supported, inter alia, peaceful relations with Poland (her letters to Bona and Sigismund Augustus survived).

In discussing her story, the poet did not attempt to present the secrets of the Sultan's harem, which fascinated many other contemporary authors, to meet the expectations of readers seeking oriental sensations, but decided to give the story of the Sultan’s darling educational significance, treating the Turkish femme fatale as an example of the negative effect of passions excited by women in the male kind, and putting her in line with other examples of women exploiting passion to ensnare a man and lead him to irrational behaviour (the biblical Delilah, the witch Armida known from Torquato Tasso’s “Jerusalem Delivered”).

To make the Sultan compliant, as Twardowski fantasizes, Roxelana used a kind of sophistry, saying that she had given him her virginity and had been entirely loyal to him, but it was unbecoming for her as a Christian to continue to live in sin, remaining unmarried. That was to lead to Roxelana’s release, and then to a formal relationship. It worked. The story in the epic is as follows. The aging sultan was losing interest in sex pleasures. To arouse desire in him, the captive woman reportedly resorted to witchcraft:

However, as love magic inspires passion only for the one who casts the spell, no other slave could satisfy his bedchamber whims. He wanted only Roxelana, who, however, announced that she had decided to live a devout life in seclusion. Besides, he could not re-enslave her as he desired because she was now a free woman; the Grand Mufti reportedly warned him about it. Suleiman had no choice but to marry the clever woman, announcing in Turkey that she supposedly came from the Polish royal family (the poet even naively states that her kinship  to the Jagiellons was the reason for the maintenance of peaceful relations with the Commonwealth).

Roxelana’s story was penned by Twardowski as an ethical exemplum (as well as his other narratives about women elevated by Fortune beyond their estate), warning men about the effects of love folly based on fascination with beauty, as well as about feminine perversity which makes women use their beauty to satisfy their own ambitions. It is quite typical for the misogynistic old Polish moralism which liked presenting men as susceptible to sensual love, stripping men of reason and leading states to ruin. Thereby, he put the beautiful Slav beside Helena or Cleopatra, somewhat hackneyed ancient examples, most readily cast in the infamous roles of femmes fatales in the past.