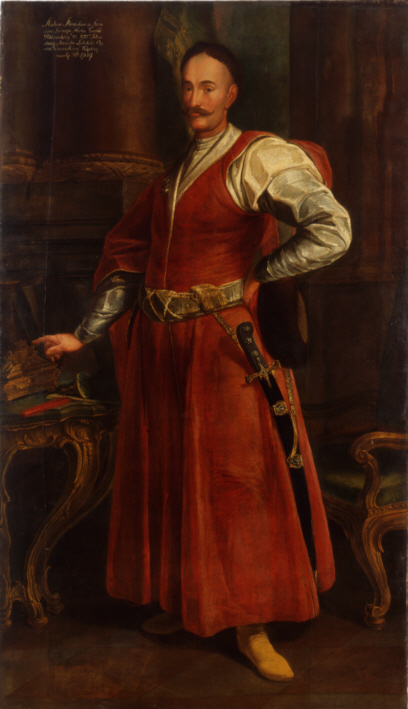 The term "Sarmatism" signifies a political doctrine and ideology, lifestyle, customs, philosophy of life and cultural trends and formation of the Commonwealth nobility in the 16th century and in particular in the 17th century until the Bar Confederation and the first partition of Poland in 1772.

In old Poland, the term "Sarmatism" did not exist, and it was coined only in the 1760s as a result of Enlightenment critique. An article published in Monitor (no. 30) spoke of the dummies of Sarmatism who had been making the country an object of ridicule for the last 200 years. The word was used to mean nobility characterised by ignorance, backwardness, provincialism, reluctance to foreign impact, xenophobia, barratry, drunkenness and megalomania who loudly protested in defence of the freedoms of the nobility. In theDictionary of Polish Language, Samuel Bogumił Linde wrote that Sarmatism meant rough manners and rudeness. Despite a more favourable look at Sarmatism already in the 1780s (when the idea of enlightened Sarmatians developed), the term remained negative for a number of years.

The etymology of the word "Sarmatism" derives from the ancient land of Sarmatia and its inhabitants Sarmatians. In his Chronicle, Jan Długosz wrote that, according to the opinions of Antique scholars, European Sarmatia covered Northern Europe and Poles and Ruthenians were descendants of Antique Sarmatians. He claimed: Thus, I believe the name [Sarmatia] given to Poles and Ruthenians by the Antiquity to be true and justified. In the Renaissance, this theory found fertile ground. Drawing on Antique sources and a fashion for tracing one's own genealogy made the Polish state, which was growing in economical and political strength at that time, desire to have Ancient provenance, too. Descent from a valiant Iranian tribe added splendour to the contemporary society.

Subsequent 16th century historiographers (e.g. Miechowita, Marcin Bielski, Marcin Kromer, Maciej Stryjkowski, Stanisław Sarnicki) developed and disseminated the myth of Sarmatian origin. If evidence to support certain theses was lacking, relevant tradition was created. Combining biblical origins from Babylon and tracing the descent of Sarmatians to Noe's son (Japheth or Asarmoth, depending on the writer), and linking them with Jan (the father of Lech and Čech, the founders of Poland and Czech Lands, respectively) emphasised the prestige of the nobility of those times, whose history was inscribed in the global history, and – more importantly – in Antique and Christian tradition.

The idea of the common Sarmatian origin of the nations inhabiting lands ruled by the Jagiellonians was gradually accepted by the society. This led to the integration of Poles, Lithuanians and Ruthenians. The Sarmatian idea was preliminary to the formal creation of the Polish-Lithuanian Commonwealth by the real union of Lublin (1569). The two nationalities had different religious denominations and needed an idea that would unite them into a homogeneous political formation. The myth of Sarmatian origin performed the integrating role. By late 16th century, thanks to writers and poets who had been disseminating the Sarmatian myth, Sarmatia had become the synonym of the Polish-Lithuanian Commonwealth, and Sarmatians – its inhabitants. However, Sarmatians quickly turned into the ancestors of the nobility only. Undoubtedly, a common origin inscribed in the history of not only Europe but the entire world as well as in Antique history and biblical tradition was an idea that every nobleman wanted to be his own. A huge and powerful European state was not behind other countries in terms of having a history of its own. In literature, the term "noble nation" was becoming increasingly popular. It untied the respective nobilities of the Crown and of Lithuania – both inhabitants of Sarmatia – and effaced former borders between the two states. The Sarmatian myth exerted a major impact on townspeople, too (especially in the area of the Royal Prussia).

In the 17th century, the myth was adapted so as to serve various goals and aspirations. It was used to justify numerous political decisions, such as expansion to the East or the "dymitriady" military escapades in the 17th century. In Baroque, the myth was used in all sorts of agitations and propagandas, both in foreign and domestic politics of the Kingdom of Poland and Grand Duchy of Lithuania.

Sarmatia's location at the junction between the West and the East influenced its cultural syncretism. The West belonged to the same cultural circle of the Greek and Roman heritage, the Antiquity, so much loved by the nobility, and the dominant Christianity. At the same time, the barbarian East attracted the nobility with its orientality. It was the source of inspiration – for utilitarian art, weapons and motifs that were later transposed for example to the garments of the nobility. The East also meant Islam and, given the triumph of the Counter-Reformation in the 17th century, Sarmatia considered itself to be the rampart of Christianity (antemurale christianitatis) and the fortress of West Europe that defended it against Islamisation. It was believed that Sarmatians would play a major role in the historic mission of defending the Old Continent. Indeed, this was the case during the Battle of Vienna (1683).

It was often emphasised that Sarmatians were a nation chosen by God. This was not only a 17th century theory that appeared as a result of the Turkish threat. The thesis was already mentioned by Stanisław Sarnicki in his Chronicle of 1587 and the former Messianic ideas were continued in the 17th century. The most Messianic, and even ridiculous, is the work of Wojciech Dembołęcki, who claimed, among other things, that God used Polish language to talk to Adam and Eve in the Paradise. Despite their irrationality, Dembołęcki's writings are a symbol of the epoch.

The Sarmatian nation was not only chosen to fulfil a historical mission but it was also believed that God looked after the ideal – as it was thought – political system of the Commonwealth. Now, it is observed that the "democracy of the nobility" is an unjustified term. The Polish and Lithuanian state was a monarchy, even though the nobility, through its privileges, had a large impact on the organisation of the life of the state. The privileges of the nobility, often named "freedoms", were the most precious element of the system for noblemen and accordingly, they defended them the most. The nobility did not see a need for any changes, to the contrary, they wished to maintain the existing system, which gave them a share in the power. Tyranny, absolutism and lawlessness of the monarch, noted both in Western states and in Moscow, made the nobility constantly call for defending their own rights and freedoms. Sarmatia was perceived as a lonely island with an ideal political system won by the ancestors.

Apart from participation in ruling over the state, another duty of all Sarmatians was to fight in wars. The descent from an Antique tribe of warriors meant that the contemporary nobility was characterised by the same features, mainly chivalric bravery and love of freedom. Catholicism, love of freedom and defending the homeland were the three most important and often treated as one noble virtues – the objects of cult and defence for the nobility. They were handed down from generation to generation.

All that came from ancestors was a sanctity. Tracing the ancestors of noble families became popular in the second half of the 17th century. Heraldry books with numerous legends about acquisition of the jewel of nobility became popular, too. The achievements of ancestors were remembered and they themselves were regarded as role models. Ideal ancestors were characterised by a specific set of features: knightliness, prowess, bravery, thrift and religiousness, which could all be substituted by one word: virtue. Fantastic stories were often invented to incorporate the history of a specific family into the history of the noble nation, the Commonwealth, Europe and even the entire world. The long lineage of families was emphasised, the cult of nobility was worshipped and the simplicity and harsh life of progenitors were highlighted. The simple life that was searched for in rural manors was a juxtaposition to contemporary conduct: extravagance, luxury and private interests. However, the pompousness of numerous feasts and ceremonies was disregarded. Feasting was a great pleasure – all important events had a special décor. Lifestyle was characterised by extravagance, luxury and ornamentation. Similar were speeches – both on national and private issues.

Old Polish writings idealised not only ancestors but also the political governance they had created: full equality and freedom, the king not aspiring to absolute power and full freedom of the nobility to elect rulers. The 17th and 18th centuries were the times of only apparent equality within the nobility. The utopia of happy ages and the idea of returning to the former glory of ancestors gave the contemporary nobility a feeling of continuity and bond with tradition.

The goal of the nobility was to defend the country, and in particular its political system. Such was the foundation of traditionalism that in time transformed into xenophobia, reluctance to foreign influence (especially political systems), conservatism and the conviction of being a unique nation. This in turn led to megalomania – not only did the nobility live in a state with an ideal political system but also Sarmatia was the granary of Europe and rampart of Christianity. As a result, proud Sarmatians started to separate themselves from the rest of the world. They spent more and more time in their own estates, which were self-sufficient economically and culturally. They looked for peaceful, decent life in noble manors, far from dangers and wars. Arcadian motifs introduced by Renaissance poets (Mikołaj Rej and Jan Kochanowski) were at that time developed in Baroque landowners' poetry.

Praise of simple life on the one hand and pompousness and flamboyance on the other hand, visible especially in art, meant that Sarmatian culture was one of a kind, the same as the moral ideals pursued by nobility. On the one hand, a Sarmatian was a gentlemanly and valiant knight who had a great hope in God and defended his faith in God, but on the other hand he was also a decent farmer and landowner who appreciated peace and quiet and loved the rural Arcadia.