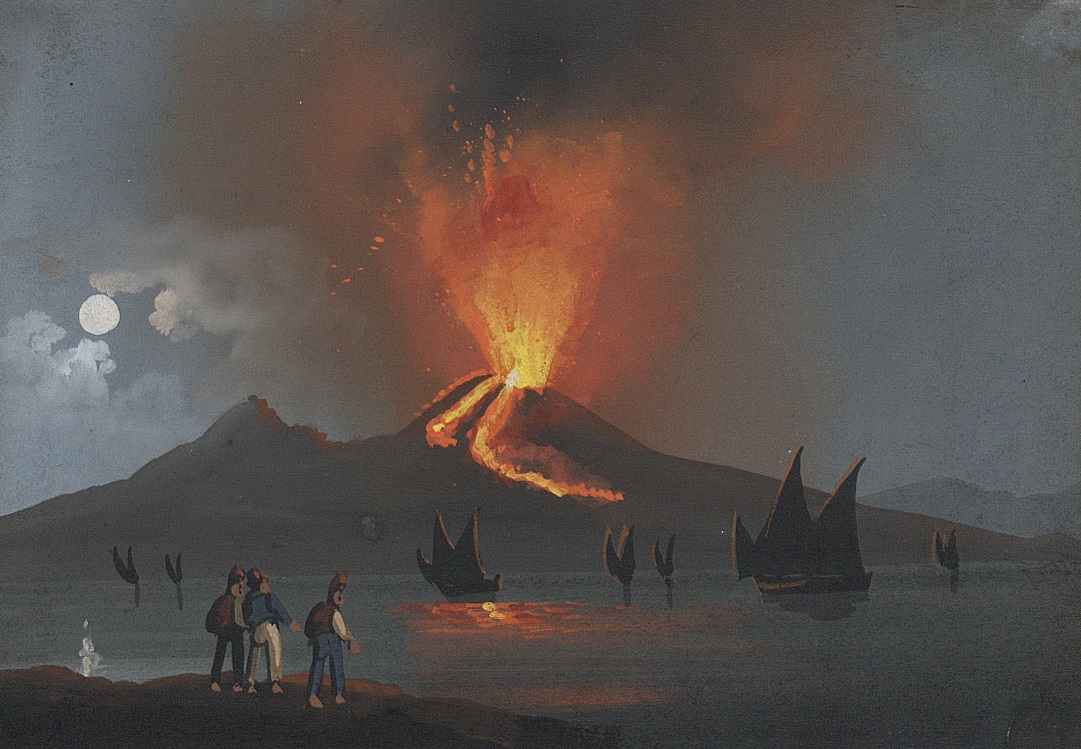 Eruption of Vesuvius in 1839; colection of National Library of Poland

In his diary of extensive travels through Italy in 1772–1797 Stanisław Kostka Potocki attaches a lot of importance to Naples, Herculaneum, Pompeii and Mount Vesuvius. The count visited the locations in the course of his journeys in 1774–1775, 1779–1780 and 1785–1786. His touring of Italy was quite natural in the light of the widespread contemporary archaeological and collection-oriented fever, focusing collectors’ attention mainly on objects of ancient art, primarily sculptures and vases. Nonetheless, the purchase of Etruscan vases and antique gems for his wife Aleksandra or precious Italian school paintings did not dissuade Potocki from touring Mount Vesuvius. Indeed, the exceptional activity of the volcano in the 18th century guaranteed a thrilling expedition to any adventure seeker (let us add that Lord William Hamilton walked on the erupting volcano with bravado, neglecting the hazard of the overflowing lava and hot ashes).

During the fourth successive travel to Italy (1785–1786), accompanied by his mother-in-law Duchess Marshall Izabela Lubomirska, Count Potocki toured Mount Vesuvius a few times and described his impressions in letters composed from Naples. The said letters provide us with various facts, one of them being Potocki’s illness following a trip to Vesuvius on 16 December 1785.  As the writer of the letter observed, he could not be sure whether he was experiencing fear of illness or illness caused by fear. Potocki went on the following trip to Mount Vesuvius in February 1786, this time accompanied by his nephew Eustachy Sanguszko and some tour guides. The account of this trip was more detailed. “Imagine a steep mountain,” he wrote, “of 3000 to 4000 fathoms covered with a few feet thick coat of ash mixed with loose stones, in which your foot gets bogged down and slips with every step (...). The Vesuvius crater is right in the middle and forms a small hill permanently isolated from the rest of the mountain by a thick cloud of smoke and flames. Terrible thuds were followed by gloomy silence. Soon the volcano takes up its muffled groan, the noise increases and eventually Vesuvius thunders, spitting out a hail of stones shrouded in hot smoke (...). We had to walk on lava so fresh and hot that we burnt our hands when clinging to it in our passage over the crevices it filled. Real lava (...) was flowing down below; we could feel it boiling underneath our feet (...).” This encounter with the volcano element discouraged Potocki from a planned attempt to paint it. In his letter composed in March of the same year the count admitted, “I have given up painting a landscape of Vesuvius as I believe that no one is worthy of taking up this lofty topic.”

Contrary to Potocki’s opinion, painters, graphic artists and print makers frequently immortalized eruptions of Vesuvius (most usually at night-time), considering the topic quite alluring. One of the many extant prints is an aquatint made in 1801 by the Danish artist John William Edy, based on a drawing by Jacob More (1740?–1793), an English landscape painter settled in Rome. The print forms part of the Potockis’ collection housed in Wilanów.