Teofila Sobieska with her sons at the grave of Stanisław Żółkiewski 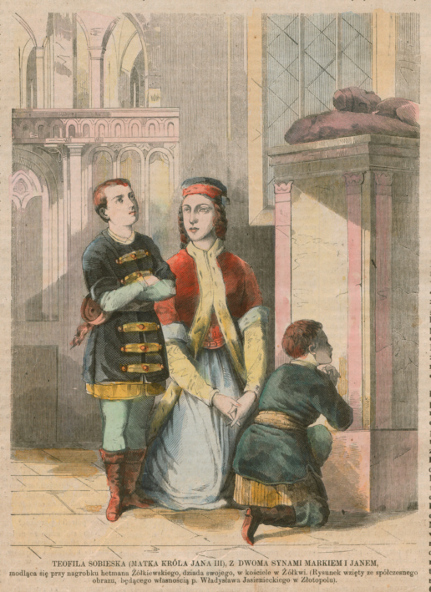 An anonymous engraver, based on a painting by an anonymous author from 1800–1850 (?): Teofila Sobieska with sons at the grave of Stanisław Żółkiewski, picture from the collection of the National Library in Warsaw.

The Sobieski royal family earnestly hated the Turks and the Tatars and never ceased to worship Hetman Stanisław Żółkiewski who tragically fell in the Battle of Cecora in 1620. The widowed wife of the heroic commander, Regina née Herburt, bought back his mutilated body (with missing head and the right arm) and buried it in a solemn ceremony in the chapel of the Żółkiew castle. The castle itself, raised in 1594 by the late hetman, was filled with his memorabilia. Preserved was the hero’s room with a simple bed and an oil lamp burning instantly above it. On the side of the bed there was his sword with a gem-studded hilt (Żółkiewski loved fine and costly weapons), a mace received from the Pope and the commander’s overcoat cut with Turkish sabres and stained with his blood shed in the memorable battle.

Sons of the Castellan of Cracow Jakub Sobieski, Marek and Jan were brought up in Żółkiew to worship their heroic great-grandfather. Their mother Teofila née Daniłowicz would often take the two boys to the hetman’s grave, striving to instil in them the love for their homeland, bravery and respect for national heroes. The later king Jan III must have remembered well the long hours spent at the grave, since years later he would write that, “From the earliest years we were made to follow in the ancestors’ footsteps; our eyes directed to their great fame, courage and respect to the divine church and the homeland; we were made to learn by heart the inscription from our great-grandfather’s grave, which read: O quam dulce et decorum est pro patria mori! (Oh, how sweet and honourable it is to die for the homeland!)”. In the young Sobieskis’ childhood Żółkiew was the focal point of family and social life, the place of a truly aristocratic splendour, waited on by numerous servants, visited by outstanding people, home to exquisite receptions and a location for hunting.

The scene wherein Teofila Sobieska and her young sons are visiting Żółkiewski’s grave was rendered in an oil painting in 1866 by Walery Jan Kanty Eljasz-Radzikowski (1841–1905). The piece, currently in the collection of the National Museum in Poznań, has never been copied in print form. By a twist of fate, earlier on another painting by an anonymous author was copied as a woodcut. The painting in question represented a much lower artistic level and was a property of Władysław Jasieniecki in Złotopole (initially Hulajpole) in the former Czehryn [Chyhyryn] county. The woodcut was published in 1862 in “Tygodnik Ilustrowany” [“The Illustrated Weekly”] and its author also remains unknown. Despite low artistic value (caused perhaps by a poor drawing as a stage in-between the painting and the woodblock), the print is nevertheless worth some study as it constitutes the only trace of the painted original non-existent today. Created probably in the nineteenth century by a mediocre artist, perhaps an amateur, the painting is at present shrouded in mystery.

An anonymous engraver, based on a painting by an anonymous author from 1800–1850 (?): Teofila Sobieska with sons at the grave of Stanisław Żółkiewski, woodcut, 1862.