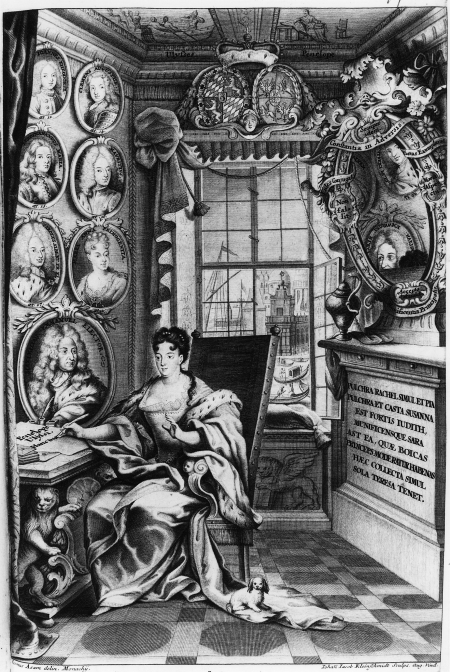 Johann Jakob Kleinschmidt, based on a drawing by Cosmas Damian Asam: Portrait of Teresa Kunegunda Sobieska, elector’s wife, picture from the collection of the National Library in Warsaw.

Teresa Kunegunda Sobieska, the only surviving daughter of Jan III Sobieski and Marie Casimire, married Elector of Bavaria Maximilian II Emanuel, thus becoming the ruler of one of the most powerful states of the Reich. The marriage took place in very specific times in the history of Bavaria. Following a long stay in Brussels as governor of the Spanish Netherlands, having returned to Munich in 1701 her husband-elector got involved in a war over the succession from Charles II. This conflict resulted in the couple being driven out of the country and separated from each other for a period of nearly 10 years, i.e. from August 1704 until spring of 1715.

Unable to return to their 10 children left in Bavaria, Teresa Kunegunda settled in Venice and maintained regular exchange of letters with her husband. Letter writing became for “Teresieńka” a very absorbing activity, which is testified by her iconography, more specifically the copperplate engraving by Johann Jakob Kleinschmidt (1687–1772), an artist active in Augsburg. The image in question was based on a drawing by Cosmas Damian Asam (1686–1739), a Bavarian by origin. The print depicting Teresa Kunegunda as faithful Penelope was published as an illustration in the 1715 panegyric entitled Fortitudo Leonina ni utraque fortuna Maximiliani Emmanuelis palatini Rheni, devoted to the elector and referring to his separation from the spouse.

The compound composition abundant in symbolic messages represents the elector’s wife inside a Venetian palace, sitting in an upright armchair at a table decorated with sculpted lions. She is holding a feather in her right hand and writing the words: Penelope Ulyssi Hanc tua on a piece of paper. Teresa Kunegunda is represented as an attractive and elegant young woman, her hair intertwined with pearls, in a low-cut dress and an ermine coat, whose folds spread on the floor; a little dog (symbol of marital fidelity) is sitting on the folds of her coat. The room interior seems crowded, mainly due to the seven portraits (oval busts) hung on the wall, representing Maximilian II Emanuel and the children. Three of the portraits are partially reflected in the impressive oval mirror suspended on the opposite wall by no incident. The mirror alludes to Teresa Kunegunda’s virtues: marital fidelity, piety, generosity and perseverance. A large glazed window overlooks Venice; visible is a fragment of Santa Maria della Salute church and Canale Grande with floating gondolas. Above the window there are two cartouches with emblems of Bavaria and of the Polish-Lithuanian Commonwealth underneath a common elector’s mitre. Higher up on the cornice there is the following inscription: Ulysses Penelope. The copperplate engraving by Asam-Kleinschmidt is undoubtedly the most interesting of all the eighteenth-century printed representations of Teresa Kunegunda. It is worth adding that after her husband’s death in 1726, the widow returned to Venice where she lived in her palace surrounded by favourite knick-knacks and family portraits. She died in the Italian city on 10 March 1730 and was buried in the vault of Theatine church in Munich.