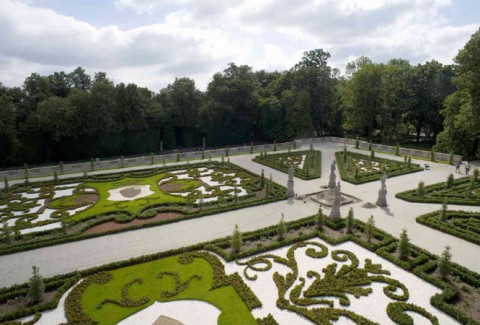 The Baroque Garden is the oldest part of the Wilanów Park. It was designed in alignment with the main axis of the Palace in accordance with the principle that a palace worthy of its name belongs between a courtyard and a garden. The Garden is situated on two natural terraces formed by the river Vistula, and is an integral part of the royal residence in Wilanów. In keeping with the precepts of Baroque art, the Upper Terrace reflects the layout of the Palace interiors. The royal bedrooms and antechambers are mirrored by the pairs of flower parterres, and the corner studies are rendered as symmetrical, triangular flowerbeds.

The wooden bowers in the corners of the terrace which had existed in the times of King Jan III were an allusion to the palace towers, and the central section of the Palace (Grand Hallway) was modelled as a rectangular lawn with a fountain. The sections of the garden on both terraces contain parterre arrangements of herbs and flowers lined with boxwood and gravel. The parterres are decorated with geometric patterns. The circles, palmettes, fleurs-de-lys and other shapes are filled with seasonal flowers, mostly characteristic of Baroque gardening, such as tulips, narcissuses, heliotropes, calceolarias, marigolds, chrysanthemums, begonias, lavender, santolina (lavender cotton), germaniums, ageratums, dahlias, sage and others.

The Baroque Garden dazzles with bold colour schemes. The key colours are red, yellow (golden) and pink, supplemented with white, orange and blue. In King Jan III Sobieski’s garden, roses and lilies took pride of place as symbols of happiness alongside paeonias (a royal flower symbolizing plenty, health and felicity) and tulips as well as lavender and rosemary, expressing splendour, virtue and goodness. A pattern of rosemary and other flowers traced the initials of King Jan III.

The Lower Terrace can be reached by two flights of stairs aligned with the axis of the Palace (there is a Sobieski Grotto under the stairs). The parterres on the Lower Terrace are separated from the lake by tall clipped bosquets. Originally, the lower section of the Baroque Garden included two symmetrical ponds. Towards the end of the King’s life, those were filled and converted into flower parterres mirroring the layout of the Upper Terrace. This arrangement continues to this day. By entering one of the bosquet-lined alleyways we can reach a promenade running along the banks of the Lake to frame the limits of the Baroque Garden.

Proprietors of the palace: from a king to a custodian

The Wilanów Palace, its beautiful gardens and buildings located in the park as well as the amassed works of art all constitute records of history. The venue commemorates Jan III, a warrior-king and at the same time a lover of books and paintings, a well-educated patron of art vividly interested in science. His memory was kept alive by Stanisław Kostka Potocki, an outstanding politician and founder of the Wilanów Museum.