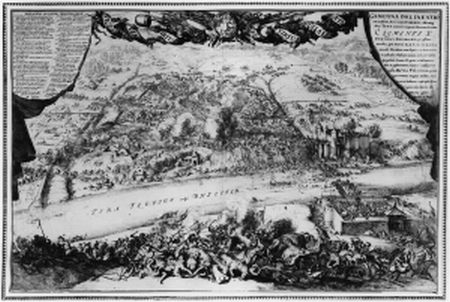 Romeyn de Hooghe, based on a drawing by Francesco Gratta the Younger: The Battle of Chocim, picture from the colection of the National Library in Warsaw.

The Battle of Chocim [Khotyn] was fought on 10-11 November 1673 between Polish and Lithuanian army and Ottoman Empire forces. The weather was biting cold, it was sleeting. A sudden and unexpected decisive attack of the Polish troops took place in the morning of 11 November and it was led personally by Hetman Jan Sobieski. The infantry and the cavalry quickly invaded the fortified Turkish camp, overcame the resistance and made its way forward. The target was to reach the bridge over the Dniester River in order to block the only possible retreat of the Ottoman forces led by Hussain Pasha. Following the breakdown of Turkish defence, the Polish cannonade destroyed the bridge which finally collapsed under the artillery attack and the weight of escaping Ottoman troops. Their defeat was complete. The corps of thirty thousand soldiers was decimated to just four thousand. The Battle of Chocim, one of the greatest victories in the history of the Polish armed forces, brought fame to Sobieski, the future King of the Polish-Lithuanian Commonwealth.

Numerous are prints dedicated to the battle, but undoubtedly one of the most magnificent among them is the copperplate engraving by Romeyn de Hooghe (1645–1708), a Dutch engraver temporarily employed by Jan III. The impressive output of Hooghe amounted to over one thousand pieces, among them some 20 related to Poland. Created in 1674–1685, they are almost entirely connected with the figure of Jan III. The employment of the Dutch artist was realized with the help of two Grattas, the father and the son, both christened Franciszek, closely linked with Sobieski. Gratta senior maintained booming commercial and political contacts with Holland. Gratta junior (died in ca. 1690) partook as a soldier in Sobieski’s military expeditions. In their course he made drawings which later served as prototypes for Hooghe’s copperplate engravings. It was the Grattas who came up with the initiative of commemorating Sobieski’s enthronement by a set of prints based on authentic drawings and recalling his past achievements.

The Battle of Chocim, a copperplate with etching measuring 470 x 710 mm, based on a drawing by Gratta junior and printed at the expense of Gratta senior in Amsterdam, depicts a bird’s eye view of the invasion of the Polish-Lithuanian forces bursting into the Turkish camp from the North. It recaptures dynamically the fierce fighting, the panic within the enemy forces, the tumbling loads of the escaping Turks and the collapse of the bridge. Faithful is also the topographic rendition of the Dniester River and its surroundings, including the view of the Chocim castle and the Turkish camp with its fortifications. The top corners contain the legend in Latin, composed of 30 points (left) and an extensive inscription with title and dedication (right). Elements of purely decorative character are the following: the five-field escutcheon of the Crown and Lithuania with the Sobieskis’ Janina coat of arms and a festoon decorated with a panoply and a ribbon wound around it; the motto on the ribbon reads: Vicit vim virtus, virtuti nella est via. Extant is also a reduced faithful copy of the same composition, chased by Hooghe in Leyden and published by Pierre van der Aa nearly 20 years later.

Romeyn de Hooghe, based on a drawing by Francesco Gratta the Younger: The Battle of Chocim, copperplate with etching, after 1673.