The Church of St Anthony in Czerniaków

The Church of St Anthony in Czerniaków Magdalena Herman 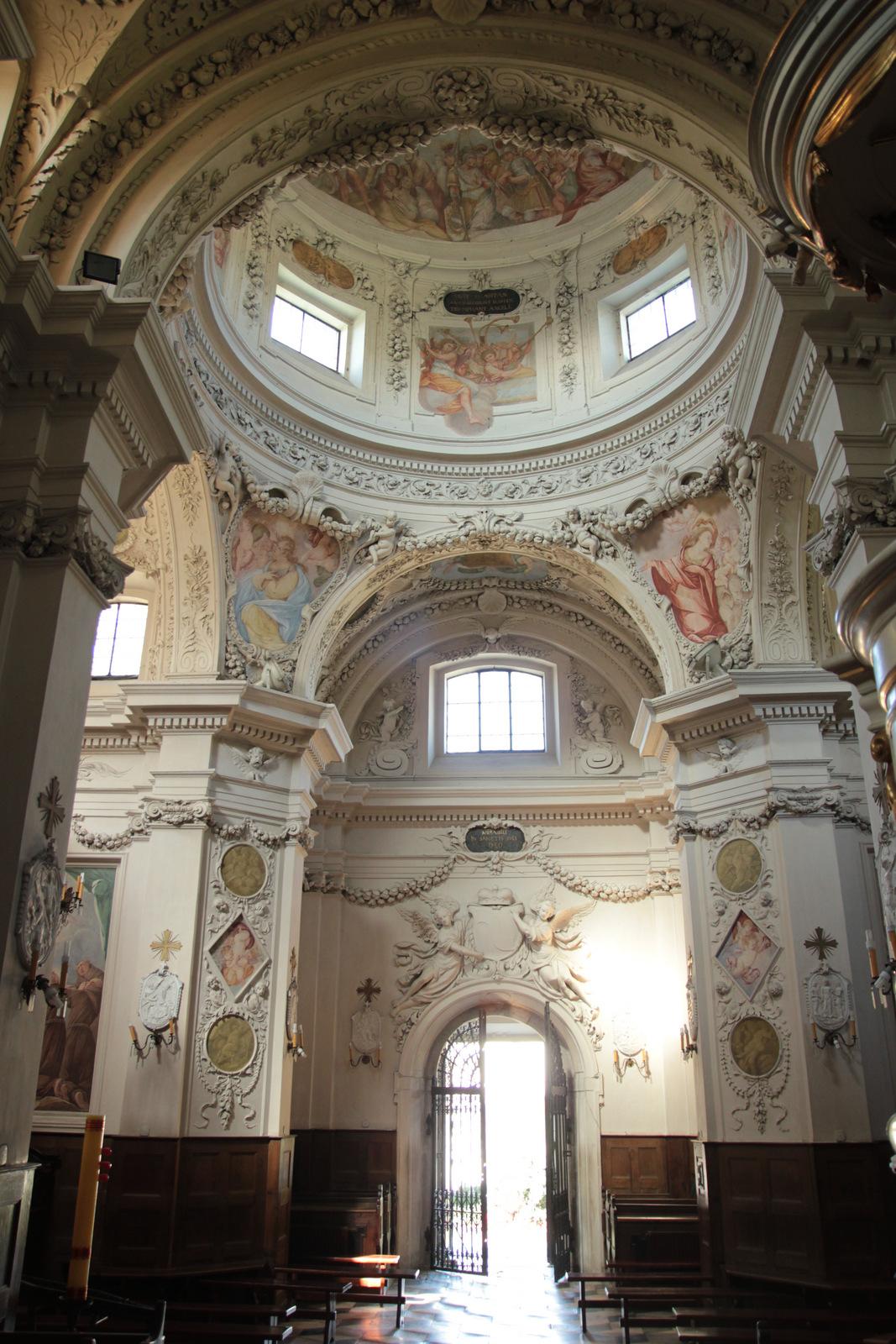 Interior of the Church of St Anthony in Czerniaków

“Never dignified enough for God,
Never uselessly for Anthony,
gladly to the devout people,
residents of the nearby city, villagers close by,
traveling comfortably,
Prince Stanisław Lubomirski, the Great Marshal of the Crown,
this periphery, devoid of churches,
sanctified with the first altar.
In the year of Our Lord 1692, on the 13th day of June”[1].

The cited inscription, today nearly unreadable, was placed above the entrance to the Bernardine church in Czerniaków, which was built as a monument to the glory and mausoleum of its founder. The first plans for the temple, designed by Tylman van Gameren, probably date back to 1686. In 1688, Italian painters could begin their work on the interior. Work was probably finished before 19 October 1693.

A series of six historical frescoes, painted on the walls of the octagonal walls of the presbytery of the temple, shows the miraculous events connected with the church in Czerniaków. The paintings of the cycle may be divided into two cycles, each of which is made up of two smaller six-sided frescoes framing the large eight-sided centre fresco. The main fresco of the set located on the south-western walls of the presbytery shows a view of the village of Czerniaków. Under the painting is a Latin inscription that allows for precise definition of the theme of the painting, which is the miraculous specification of the location of the temple: “The founder, undecided as to the location of the temple, the unexpected sign in the form of fire falling slowly to the earth, miraculously recommended this place”.

The miraculous event was presented on the background of a wide landscape. The buildings of Czerniaków are visible in it, with the manor of Marshal Lubomirski and the Wilanów Palace in the distance. On the right side, the painter depicted Stanisław Herakliusz Lubomirski discussing, surrounded by his courtiers, the plans for the church with his friend and architect, Tylman van Gameren. Besides them, residents of the village, minor nobility and several travellers on the way to Wilanów can be found in the fresco. It should be noted that the connection of the construction of the temple with a miraculous interference emphasised not only the role of the church but also its founder, whose plans received God’s blessing. In paintings framing the central fresco are images of the church’s construction and the ceremonial ingress of the painting of St Anthony.

The painting of St Anthony was placed in the centre of the main altar that stands in the presbytery of the church at Lubomirski’s instruction. As the foundational act says, the painting was touched to a relic of St Anthony and is famous for many graces. The Marshal received it in Venice in 1687 from the Baron Ottavio de Tassis. Its transport to Poland is presented in the second set of presbytery frescos. The inscription found under the central fresco of the tryptic states that it was saved from a fire raging in Venice. In the painting, the saint is carried by angels over the Venetian Pizazzetta, shown from the Canale di San Marco. The main altar angels sculpted by Andreas Schlüter, like the ones in the fresco, support the work of an unknown artist. The remaining two frescos connected with the history of the painting, showing it being moved into a gondola and brought to the Castle in Ujazdów.

On the other side of the main altar is a painting that shares a frame with that of the Padua saint, which is an image of Christ in the style of a veraicon (a face reflected in the veil of St Veronica). In a small crypt underneath the altar, in a glass reliquary, is the body of Roman martyr St Boniface, which the founder of the church received from Pope Innocent XI. The faithful could view it during church services through a wrought grate in the lower part of the altar. Today, the grate is blocked by the conciliar altar.

What is interesting, the majority of the inscriptions and paintings on the walls of the church, complementing the excellent stucco work, concerns St Anthony and not St Boniface. It appears that this was a thought-out choice. St Boniface was a Roman martyr, unknown to the faithful. Perhaps Lubomirski counted on the image of the Paduan saint, known for its graces, enjoying greater popularity. He brought the figure of St Anthony into the church for the people, as it were. For himself, he placed the body of St Boniface in the church, next to whom he was later buried. The inscription over the glass sarcophagus, Lubomirski emphasized his role in bringing the relics to the church, but also defined the saint as his patron and guardian of the church. Many inscriptions in the Czerniaków church refer to the figure of its founder.

There are two side altars in the small church. One of them holds the Flemish triptych Descent from the Cross from the 16th century, which Marta Topińska has identified as a work from the workshop of Pieter Coecke van Aelst. The second altar holds an image of St Francis. In the foundation act, Lubomirski lists the relics placed on the side altars (a thorn from Christ’s crown and blood from St Francis’ stigmata), carefully describing their provenance.

There is no tombstone for the founder in the church. Stanisław Herakliusz Lubomirski left a will stating he was to be buried in the church crypt under a modest inscription hic iacet peccator huius loci fundator – “here lies a sinner, the founder of this place”. The Marshall died in 1702. His body was laid in the Czerniaków crypt after the funeral, but it wasn’t until 1708 that it was ceremonially moved to a marble sarcophagus founded by his daughter, Elżbieta Sieniawska. Currently, because of works done in the crypt in the 19th century, it is located in a side niche. Originally, the sarcophagus was placed in the middle of the main room of the crypt. The part of the church directly above him is covered with a dome, in the roof lantern of which a Latin inscription is placed, “whoever humbles himself will be exalted,” undoubtedly referring to Lubomirski. The sarcophagus stood by a wall decorated with an extremely interesting stucco. On the background of a heavy curtain, lifted by putti, is the scene “The resurrection of Piotrowin by St Stanislaus”, the namesake of the magnate resting in its vicinity and awaiting eternal life.