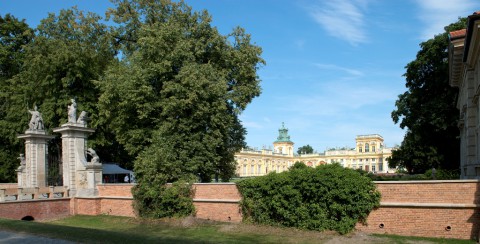 The retaining wall after the conservation works, photo by W. Holnicki

The conservation of a ceramic retaining wall of the dry moat from the main entrance into the courtyard of the Palace in Wilanów was one of the projects facilitated by co-financing from the European Union.

From the west the wall delimits the northern part of the gardens and courtyard of the Palace in Wilanów. It runs from St. Anne’s Church, which neighbours Wilanów’s garden and palace complex, to the Guardhouse. Throughout its whole length the structure constitutes a retaining wall in a dry moat. The structure is made of bricks joined with lime and sand mortar in the oldest part and cement and lime in the redeveloped part. It is decorated with a brickwork bond known as the Venice or cross bond, characteristic of 17th-century walls. Except for the section which comprises the wall base of the Guardhouse, its surface is topped with coping stone.

The most important and labour-intensive works were carried out on the oldest and most-corroded part of the wall. The main elements of the works were:

Scattered accumulations and those closely integrated with the base surface were removed from the decorative detail on the sandstone (cornice and wall coping), which was then consolidated. The stone-processing works that could not be subjected to conservation due to their condition were recreated in corresponding raw materials with similar technical and colour characteristics.

The conservation of the retaining wall of the moat facing the forefield was conducted as a part of the “The revitalisation and digitalisation of Wilanów, the only Baroque royal residence in Poland” project. The Project had secured support from the European Regional Development Fund under the Infrastructure and Environment 2007-2013 Operational Programme, Priority XI “Culture and Cultural Heritage”, Activity 11.1. Protecting and maintaining cultural heritage of over-regional importance. In accordance with the adopted Project Implementation Scheme, the investment was completed by 30 September 2015. The total value of the Project: PLN 18 854 348,06. The amount of additional financing: PLN 14 912 881,37 (European Regional Development Fund: PLN 12 675 949,15, and State Budget: PLN 2 236 932,22). For more information on the Infrastructure and Environment Operational Programme please visit www.pois.gov.pl. For more information about the project please click on this link.

The upgrading of the roof over Belvedere

The “The revitalisation and digitalisation of Wilanów, the only Baroque royal residence in Poland” project involved the replacement of the …

The conservation of the well on the courtyard

Developed in the Baroque period, the courtyard, with its characteristic division into two parts, survived until the early 19th century. …